Lesbians: SEEING the Forest because we are Not Trees

While using some examples from a few recent Twitter hoo-hahs, this post is by no means limited to these examples, they merely highlight issues Lesbians have been dealing with whenever we point out the obvious to (het) Women/Feminists for centuries.

The case in point occurred over several days when responding to feminist's talk blather about "male violence". Clearly as Lesbians we are all too aware that much of the violence perpetuated on the world/its inhabitants has been (het) male driven and (het) female supported (in varying ways). Lesbians pointing out the latter are ALWAYS met by (het) Women (quite literally) hysterics by conversations end.

I do not limit these observations/experiences simply to the internet, but to MANY (as I'm getting long in the tooth by the second!) decades of personal LESBIAN experience plus the personal lifetime experiences of fellow Lesbians and centuries of Lesbians past. And I do not doubt the experiences of Lesbians past with (het) Women, because I too have the same experiences with them every single day of my life for as long as I have had memory. But lets say for the sake of argument I did not, I would only have to open my eyes in the morning, or open a book or look out my window or step out my door to see for myself how Heterosexuals of both sexes have impacted the world via action/passivity. What is also blatant is which Hetero sex has predominantly used action and which passivity.

Digressing back to the Twitter incidents I first mentioned, when someone who had followed me made a slew of statements about "male violence" I made a few comments back about regarding (het) Women's role in bearing those males and raising them. This didnt go over too well with the (het) Woman in question and as has been the ongoing Lesbian experience when trying to have an honest conversation about male violence/birth control etc, like the steps of grief, there is a set of steps that (het) Women go through when Lesbians do not agree with their every word/challenge their Heterocentric thought processes:

Step 1) They either think you (meaning Lesbians) are male or they will insultingly pretend to think you're male. This Tweet was in reference to me:

Step 2) Then when pointed out we (in this case me) is a Lesbian, comes the all purpose blame-the-Dyke/s-excuse/s:

Step 3) Even after knowing we are Lesbians, make insulting paper thin comparisons to us (Lesbians) with men: 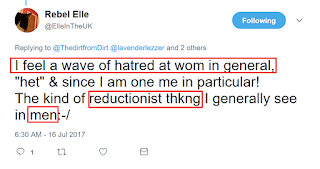 Step 4) Claim Lesbian/s are attacking them/see insults where none exist: 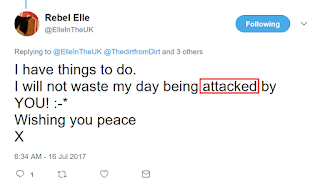 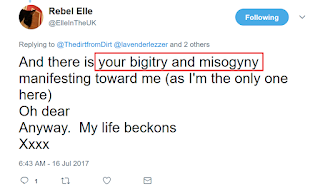 Step 5) When their behaviour reaches the bizarre, their Homophobic responses reach extremes and their Lezbophobia is called out, they Block/run for the hills:

Step 6) Incite other (het) Women to attack the mean Lesbian/s which then runs a similar course and... 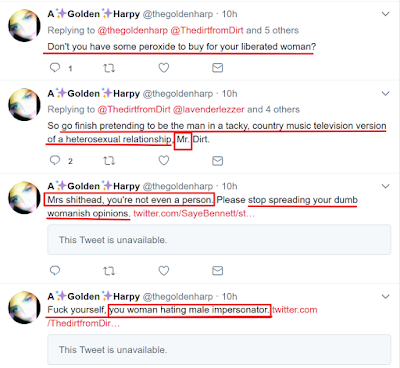 Pointing out differences in brain functions between Lesbians and (het) Women isnt hate, it is obviously important for LESBIANS (Lesbian even when highly flustered/frustrated and angry still maintain linear thinking/conversing) to know in order to help Lesbians better traverse (het) Women in our/their lives.

I suspect the hysterics/all loss of reason (het) Women go into when confronted with Lesbians occurs because, unlike the males in their lives who (and we Lesbians have ALL heard a male in our lives say when arguing a point with a (het) female friend/relative-"just let it go, its not worth it") will just let the point go to regain peace/not have to listen to grousing. Lesbians not being trained in (het) Women like young males are by older males, we Lesbians will continue to make our point and in sticking by our guns, most (het) Women will become hysterical. This behaviour in and of itself illustrates some of the biological differences between Lesbians and (het) Women.

Were it merely arguing over what tastes better, Coke or Pepsi with (het) Women, maybe Lesbians could simply let it go. But where Lesbian lives are at stake, Lesbian biology, Lesbian accuracy? Then NO, we will not let it go! We will fight to the proverbial death if it means providing accurate information that can benefit other Lesbians! And Lesbians knowing whom they can and cannot trust can be a matter of LIFE or DEATH!

The biological realities of Heterosexual Males and Females is all around us, it is infantile to think (Het) Males just bulldozed their way throughout time (patriarchy) and (het) Women had no say in the making of that world whatsoever. (het) Women created and continue to create humans everyday, if they really did fear/hate the (het) male population/male violence as much as they claim, then they could have LONG ago stopped the male population from existing in large numbers. Males do not bear children, but using their male biology, they have in the course of a few decades halted the births of millions of females being born. But again, obviously (het) Women played a passive role in that.

Dykes on the other hand wouldnt be alive today if our brains processed in the same way as (het) female brains function, (het) female passivity would actively get us killed or silenced. Lesbians may not be male, but we are action oriented, even the shyest among us. Lesbians do not rebel against patriarchy. Lesbians arent Lesbians because we are brave. Lesbians do not stand up to men.We stand separate from EVERYBODY. That does not mean we are alone, but it does mean we are a unique biological entity. Lesbians SEE the forests, because none of us are trees.

See Mrs Dirt's piece on the subject as well: The Sadly Predictable Stages of Hetsplaining