Know-It-All HET Women who know NOTHING about Lesbians 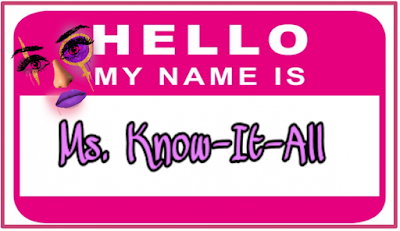 Due to the overwhelming amount of ongoing ignorance bleating from the mouths of know-it-all-privileged (Het) Women, who while knowing shit all about Lesbians (aside from the heterocentric Queer/STRAIGHTBIAN/Hasbian/I-kissed-a-girl-and-I-liked-it faux "lesbians" they are or know or know of) continue to use their Heterosexual ideas of Lesbian to further whatever deluded agenda they are arguing at the moment! With no thought or care how THEIR warped ideas of Lesbian harm and damage Lesbians!

And whenever LESBIANS point out their inaccuracies, we are confronted with shock and dismay for either not accepting help from our allies (who the fuck asked them for help?) or for not being grateful for their warped input/interest!

Here are a just a few of the outright LIES (Het) Women are saying to/about Lesbians, followed by the actual TRUTH about Lesbian lives/Lesbian experiences:

1) Lie: "Trans Women are pressuring/tricking Lesbian youths into having sex with them."
Truth: This is a HUGE bald face fucking lie! Dykes, no matter the age are NOT tricked into sex with men! Dykes are not ignorant, nor weak, nor infuckingclined on having sex with men--no matter how said man presents himself! Clearly know-It-All HET Women have never been to a Lesbian bar/Mixed Gay bar or a Lezzie softball game. MCDs (medicalized cross dressers) are not exactly lining up to approach Dykes for anything, let alone sex! And if for some bizarre reason they were? They'd be in for a rude fucking awakening when they realized Lesbians do not resemble their heterosexual fantasies Het women so often prop up/produce or just plain are! The LESBIAN TRUTH IS: the only females MCDs fuck with/fuck-are STRAIGHT!

2) Lie: "There is no difference between Lesbian female biology and STRAIGHT female biology."
Truth: Whenever Lesbians bond over our similarities with each other or our common differences with (Het) Girls/Women, know-It-All HET Women immediately go into (often passive, usually cutting/snarky) attack mode (really making our point here easy, but they are too Het to understand why) or quickly labeling/accusing Lesbians of being aggressive or crazy etc./acting like men/being mean/acting impolite/not being a good "sister" to all women. The LESBIAN TRUTH IS: Lesbians ARE biologically different, indicated in the least sense by our attraction alone! Attraction that occurs where? Wait for it.....wait for it......our LESBIAN brain! Know-It-All HET Women cannot see/process/function past their own privileged biology to appreciate anyone else's.

3) Lie: "Lesbians have no data/studies to prove we are different, so therefore, we are not."
Truth: Apparently 5,000 years of Lesbians does not constitute "proof"! When proofs are pointed out via Lesbian experiences, Lesbian brain processes, Lesbian lives, know-It-All HET Women either dismiss actual Lesbians in favor of their own deluded/misguided SEXUAL experiences with Women (not Lesbians), their own notions of Lesbian from warped/fucked up and usually sexually abused Straight women (Feminists/RadFems/Queer/Bi), they disparage everything Lesbians say, they close ranks with others like themselves to wall off all truths about Lesbian lives, loves, and Lesbian experiences. The LESBIAN TRUTH IS: know-It-All HET Women REFUSE to see or acknowledge Lesbian biology, because in doing so they would have to look in the mirror at their own. Know-It-All HET Women fear what that mirror would reveal more than they fear death itself and THAT is the fucking TRUTH!