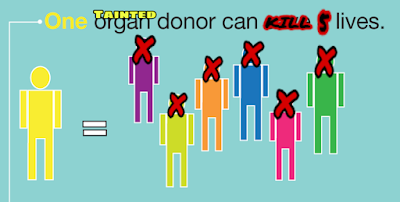 There's a lot of Trans critical buzz at the moment regarding the recent unfortunate/unnecessary death of trans female Rebecca Elizabeth Feldhaus AKA Rowan Feldhaus, who died from septic shock after receiving a hysterectomy for PCOS. Much of the ado is as much about Trans sterilization as it is Rebecca's death. In typical heterocentric fashion, heaven and earth forbid whenever and for whatever reason a female's baby maker is removed!

Prior to the involvement of the heterosexual brained pop-out-a-baby-or-die-trying Liberals, medicalized treatment for Transgender consisted of removing hormone driven cancer sensitive organs (including reproductive) prior to the introduction of cross sex hormones. In lieu heterosexual Liberal anti-sterilization policies cancer risks to Transgender patients have increased sooner and complicated Trans surgeries post cross sex hormones later on.

The majority of Trans critical Liberal simps support adult use/treatment of Trans drugs/surgeries. What they are highly critical of however is Trans surgeries involving sterilization! Regarding this particular case Trans Crit Libs are (with Hetero narrow mindedness) trying to make the point that Rebecca Feldhaus would not be dead had she not been sterilized. NOT however that she shouldnt have been medically supported in using cross sexed hormones (that increase cancer risks to reproductive organs) that in fact diseased her reproductive organs (and perhaps other organs) thereby requiring their removal!

Worst of all, in the midst of the Heterocentric Trans Crit flurry over Rebecca's hysto death, the pop-out-a-baby-panacea completely missed the circus of elephants in the operating room!

In other words, sauced synthetic hormone treated organs (her reproductive organs were already diseased) will be used in no less that FIVE other people! No mention or thought given to the myriad of studies (short and long term) that give evidence that HRT gives rise to various cancers and other cardiovascular diseases, including mitochondria  cell death from cross sex hormone use. And absolutely zip lips on what the aromatization of testosterone had on Rebecca's tainted organs that have/are being donated to already health compromised people!

FIVE more people may die because doctors ignored basic female biology by green lighting Rebecca's testosterone use for the fruitless purpose of transition. While Trans Crit Libs are more concerned that Rebecca and other Transgender females can still push a poison baby out of their pussy's!

All ignoring that Rebecca's organs are now being given out like candy to a baby. FIVE starving babies in this case and not a warning sign in sight to tell them there's a razor blade in the caramel apples!

Ignorant and shortsighted doesnt even BEGIN to cover the damage done or the damages yet to come.