Is Aunt Lynn a Boy? or Do Children Respond to Lesbians as they Respond toward Males? 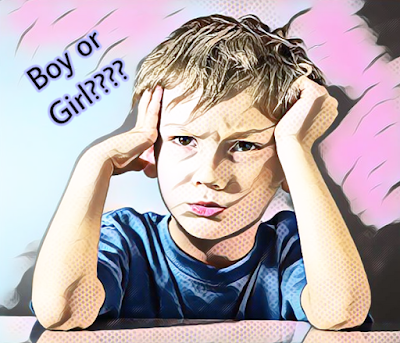 Last Sunday Mrs Dirt and I had breakfast with a niece of my we hadnt seen in a while. My niece had with her, my great great nephew-Eli, age 7. Eli we hadnt seen for about a year. During breakfast Eli incorrectly used a male pronoun toward me, my niece quickly corrected him, then reminded him that they had discussed this earlier when they were on their way down for breakfast. My niece explained to Anna and I the conversation her and Eli had about me being a girl and not a boy, as Eli had, with my niece used an incorrect pronoun regarding myself. This situation is one both my niece and I are used to, as family youngsters have LONG incorrectly assumed I am a male. And like Eli, are perplexed to find out that I am in fact a female.

Anna and I asked Eli what makes me a boy and Anna a girl. His first response was that I had on long shorts. He said girls dont wear long shorts. Anna then said that her shorts were the same length as mine, then asked him if she too is a boy. Eli shook his head emphatically NO. He then said Anna had longer hair and pointed out I had boy hair. Anna then asked him if he grew his hair out the same length as hers, would he be a girl. He looked icked out and said NO! I told him then that Anna was like Bruce Jenner (he clearly knew who I referenced) and looked at Anna and said jokingly "take off you wig then"! Eli then looked at my niece and asked " aunt Lynn is a boy, right?". My niece said no, Lynn is a girl. I asked him, if I grew my hair out and had shorter shorts, would that make me a girl like Anna. He shook his head no again. He said "you a boy"! He said that all three of us were trying to "fool" him. Eli went home sure that my actual sex is male. Even when social cues to sex were stripped away, Eli still remained convinced I am male.

Also interesting is, despite being assured that Anna is female, he responded to her very differently than he did/does with my niece. He treated/acted with her as he does me-like he would around males. My niece, he acts like he typically does around women (and by women I most certainly mean straight). He has always been quite the handful, being spoiled by his great granny and my niece doesnt help. Despite not having seen him in quite a while, up until a year ago, I saw him quite often. He acts bananas with women relatives and falls in line if a male relative is around or when I am or now even when Anna is. His response to me is common whenever I'm around children, even children that do not know me, Anna admits to the same in her vast experience with children, related and unrelated.

Even when it is clear that we are female, children respond to us as they would males. I HEAVILY suspect even when it is physically obvious Lesbians are female, we are STILL read as male(ish) via brain processes. It isnt simply that we as Homosexuals have a built in gaydar system for detecting each other, we have a gaydar system that signals to Heterosexuals how to respond to us/treat us.

More examples of Lesbian experiences with being read as male by adult Heterosexuals coming soon.