The other day I received a message from the contact form on this blog in response to THIS post. See email message here:

Given its snide passive aggressive whine, I screen-capped it, then Tweeted something equally snide, but directly making the point I knew STRAIGHT where it originated even if I didnt know specifically who. My Tweet: 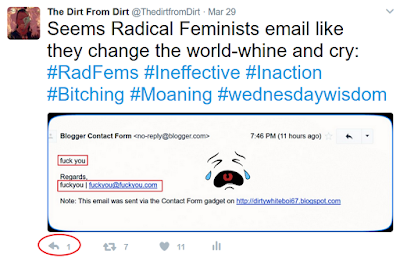 At some point I received a comment unbeknownst to me (see the 1 notification above) due to being at work. My wife, who was also working, briefly saw the hostile homophobic comment and when she went to screen-cap it, it was gone. Fortunately, thanks to technology, I am now in possession of the removed comment. See removed comment here:

This HATE filled, blatantly HOMOPHOBIC remark is symptomatic of the larger WHY behind the work Mrs Dirt and I are doing now. Necessary work, revealing whats just a breaths hair beneath the surface of every Heterosexual claiming to be our allies or worse claiming to be Lesbians themselves!

And the most PATHETIC thing about this comment is, it isnt Radical Feminists/Feminists kicking us out of our homes, firing us from our jobs or bashing us bloody in the streets, it is heterosexual MEN! Homophobic bitches like Tara, STILL require men to do their dirty work. How heterosexually passively female! Being homophobic is quiescent, BUT doing homophobia Tara, requires actions you're too gutless to execute and to cowardly to leave in print.

Hatred and Violence against Gays and Lesbians is as REAL today as it was 2000 years ago, and like historic homophobes, the worst among them are the ones smiling in our faces. Dont be fooled my Homosexual comrades, and NEVER NEVER NEVER let your guard down!

Then while using one of her other accounts left these VERY strange insane odd comments: 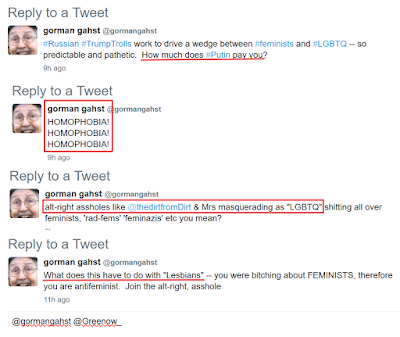 Apparently Lesbians pointing out closet Homophobia puts us on the same wave length as Putin! Some RIGHT feminist bigoted logic there! NOT!
Posted by dirt at March 30, 2017