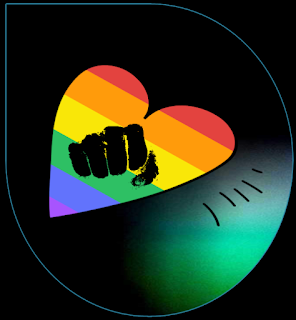 I recently received an email from two academics who are seeking PAYING parental participants for a study of "transgender and gender non-conforming children (TGNC)". The two women doing the study are Michèle Schlehofer, Ph.D. and Lori Cortez-Regan, MA 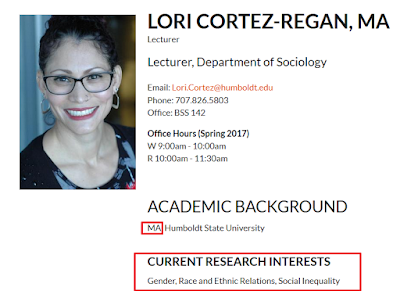 The email being circulated: 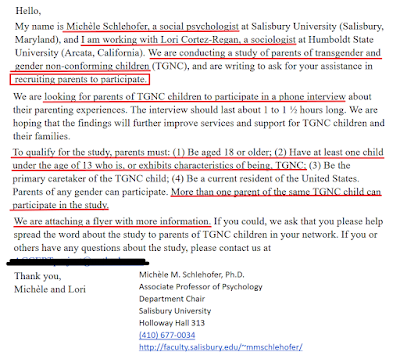 Before moving on lets take a closer look at the extensive Transgender and Gay/Lesbian work/experience the Dr of the pair Michèle Schlehofer has. A little background materiel on Michele for starters:

Her parents had high expectations for Michèle; “beginning in kindergarten, my father expected me to earn all A’s.”  A self-described “nerd,” Michèle was a serious student with a small circle of “nerdy” friends. However, no one in her extended family had been to college, so their expectations were vague, with no talk about college. While her parents were, and have continued to be, supportive of any choice she made, it was left to Michèle to choose her own path after high school. Michèle’s vision was that she’d graduate high school, marry and raise a family.

Michèle attended a community college, paid for by her parents, commuting from home. She majored in human services where she reveled in her exposure to sociology and feminist theory. At 19, she married her 25-year old boyfriend. Although they had nothing in common, he was supportive of her at the time she most needed it.

In other words, when Michele's parents werent footing the bill, Michele found a guy (regardless of the lack of romantic interest) who would financially pitch it when needed.

Having applied to 12 schools, for M.A. or Ph.D. programs, she accepted the only Ph.D. program that accepted her, at the pricey Claremont Graduate University in California. Having graduated college with no debt, “I knew nothing about how to finance graduate study,” so her first year of graduate school was paid for with student loans.

Well, Michele might not be too bright, but at least she's honest! The great thing about college, regardless of shit grades, if you have the money and the will and the postage stamps, apply to enough of them and one is bound to accept you!

Although married for 7 years, she realized early on that the marriage was a mistake, the two being “polar opposites.” She divorced at age 26 but, after ending another ill-fated relationship, she had a son, Ty. Then a single mother, living across the country from family, she went through a very rough patch financially. She took a number of teaching and research jobs at various local colleges, to support her and Ty, but she was still amassing a significant student debt.

Meaning, hubby #1 realized Michele was only invested in his wallet so he divorced her, she carelessly got herself knocked up from another guy, then bemoaned not having mommy and daddy nearby to use for free child care. Between nights out on the town and babysitters, Michele accumulated a growing debt! Whats a woman to do?

Carrying $70,000 in student debt, she was in a state of panic about finances, so Michèle applied broadly for academic jobs, submitting 40 applications across the U.S. She focused on the East Coast, to be closer to her family. She was in high demand for teaching-focused positions and had scheduled about 25 phone interviews and 13 visits to campuses, most for January and February. However, Salisbury University (located in a somewhat rural area on the Eastern Shore of Maryland) made her an immediate offer in December but demanded a quick reply. Facing two months of campus visits away from her infant son (her mother had offered to care for Ty for the two months), Michèle faced a dilemma – accept the guaranteed position at Salisbury or hold out for the possibility of being offered a position elsewhere,. “Having responsibility for an infant made all the difference, so I took a bird in the hand rather than two in the bush.”

In other words, fearing her previous predicament of applying everywhere and receiving only a single acceptance/offer, despite her displeasure at working for Salisbury Steak Uni, Michele (rightly) feared nobody else would hire an unlicensed no skilled applied social psychology wannabe academic, so she settled. In effort to receive tenure Michele quickly set out to publish as much garbage as possible. See examples here: 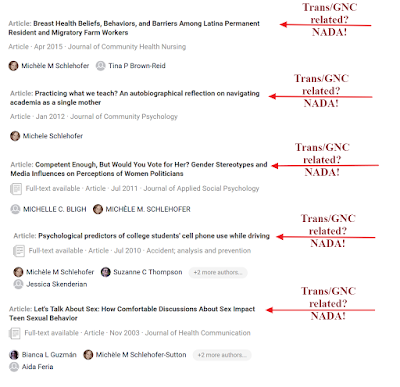 Lori Cortez-Regan has less academic publications (she has none), therefore together Michelle and Lori have amassed ZERO backgrounds/background related education/works on Transgender or the Homophobic Gender Non Conforming DSM gravy train. So what could have happened to have lead a subpar third-rate academic to jump on the Trans-Train?

While establishing her academic career, Michèle’s life also has been eventful on the family front. Two years after moving to Salisbury, she began dating Donnie Copper, a personal trainer with whom she worked out. They married in 2012, and in 2014, baby Don Jr (DJ) arrived. Big brother Ty’s activities, as a gender nonconforming child, have become a focus of Michèle’s community involvement.

Now it becomes clear, a HOMOPHOBIC Michele Schlehofer saw her Gay son as a meal ticket and a career step! Having already written/published on her PERSONAL woes of single motherhood, why not take it a step further by TYing in that woe with popular buzz issues like Trans/GNC. But given Michele came late to the party and there are literally tens of thousands of personal accounts child abuses by the parents of a Transgender/GNC child, Michele had to step up her game, hence the search for some of those parents for her little study. Clearly getting parents to talk about or discuss their Trans/GNC child hasnt been as easy as I suspect Michele and company to have thought, so Michele added a little incentive: 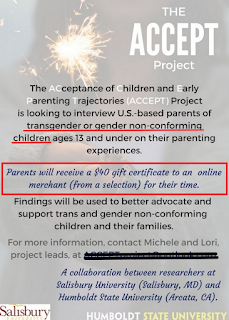 Michèle Schlehofer, Salisbury Steak Uni, Lori Cortez-Regan, Humboldt State Uni and depending on their grant amount are PAYING for subjective SELF REPORTED (Useless) information to fuel a bullshit study that will lend further false evidence that Gay and Lesbian children are ABNORMAL (Trans/GNC)! All so that Michele can break her arm patting herself on the back for what a fine HOMOPHOBIC mother she is AND make a much needed buck or two to boot!

Little does Michele know her HOMOPHOBIC study has been/is compromised, but on the plus side, my friends and family (who faked having a trans/gnc child) who have been interviewed and are lined up to be interviewed thank Michele and Lori for the gift card!

Obviously this will be revisited after the study is published, the HOMOPHOBIC questions asked will also be highlighted at that time.