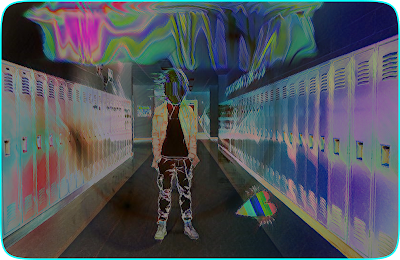 In my last post (read here) I discussed how dominant heterosexual culture ignorantly/willfully and wrongfully posits the heterosexual female child category Girl on ALL female children thereby harming and in some cases denting Lesbian children. The damage done to Lesbian children via heterosexual presumptions follows Lesbian youths straight into their Lesbian teens where confusion is compounded and the blooms of self hatred can flourish.

Puberty under even the best circumstances is no picnic, for Lesbian teens it often falls somewhere on the line of difficult, cruel or a nightmare with difficult being the best case scenario. The myriad of issues that Lesbian teens struggle with during puberty can all be traced back to dominant heterosexual culture and the heterosexual categories Teenage Girl or Girl Teenagers/Young Woman. As discussed in the previous post on brain functioning/behaviour differences between Girls and Lesbian children, these differences grow larger during puberty; partly out of how puberty differently affects Lesbian teens and partly from how puberty further develops Lesbian teen romantic feelings.

Some of the core ways puberty differently affects Lesbian teenagers:
What does this mean exactly? It means, unless Girls who (most-not all-but most) cannot wait for their breast and hips to develop, and even for their Periods to begin (signifying) adult STRAIGHT female rites of passage, including cultural systems supporting those rites/rights, Lesbian teens have nothing. Lesbian teens arent told by our parents/families/culture that some day some other Lesbian will love our breasts, our hips and our periods are special because they signify our bodies' changing ability for us to one day give birth. (I'm reminded of a Tshirt I wore in the early 90's which stated I fuck to cum, NOT to conceive)

In the past Lesbian teenagers were especially vulnerable to suicide. Remember unlike emotionally damaged Girls who tend to act out masochistically, Lesbian teenagers act out in (milder anti social) ways often associated with male teen behaviour such as taking drugs, drinking, getting into fights (with male peers), punching or kicking walls etc. And where especially hurt/sensitive, Lesbian teens were prone to suicide and suicide by more violent means more similar to male teens than to teen Girls.

In lieu of the current pro Transgender moment, Lesbian teens are now vulnerable to suicide via transition. Meaning Lesbian teenagers are seeking to kill themselves through transition, a living death if you will. And while that may seem more productive than death itself, it by no means equals happiness and unfortunately (statistically) signifies only a delay in actual suicide.

Another core area Lesbian teenagers differ is romantically:
For all the Liberal Lefts reminders hetsplaining of how far homosexuals have come (because of them mind you), as a Lesbian and as far as Lesbianism is concerned, I'm here to tell you that for every gain, there is a multitude of losses, and for every loss a multitude of advancements that never came.

Lesbian teens do not possess the luxury of practicing Lesbian adulthood or Lesbian romances with another Lesbian teen. And where there is the rare occasion that two Lesbians find each other in grade school or junior high, it is rarer that they can freely (safely) explore their feelings at say a school dance or walking hand in hand through the schools hallways or invited home to meet mom and dad. There are much more occasions where Lesbian teens have tried, only to be bashed, kicked out of school or home or all of the above. There is no adequate junior high or high school support of Lesbian teens, because Lesbianism itself is still (even among Radical Feminist/Feminism) suspect, disbelieved, co-opted or hetsplained into the unrecognizable!

Lesbian teens are often used/abused by Girl peers, treated by Girls all too often as boy stand ins who are immediately dumped/pushed aside when a Boy teen shows a Girl interest. Unlike Girl peers who are biologically/socially understanding of Girls dumping/blowing other Girls off for Boys, Lesbians are routinely emotionally hurt and understandably confused. In the same vein, all messages Lesbian teens receive are heterosexually transmitted. Lesbian teens either have the gumption to reject these foreign messages (which happens only rarely to the Lesbian loner) or more likely try and apply heterosexuality to their Lesbian experiences which again, usually means playing Boy to some Girl which always ends in Lesbian heartbreak or worse.

Lesbian childhood may be confusing, but Lesbian teen years can be down right painful, even suicidally lonely. For all of technology's globally shrinking the world via internet connections, Lesbian teenagers remain distant from each other and even more distant from honest, useful and accurate Lesbian information. Lesbian teenagers are pelted with hetsplained notions of Lesbian children/teen and adult behaviours/experiences as abnormal or gender non conforming as Liberal homophobes loathsomely put it today.

As lonely as Lesbian teen years can be, it is far better to be lonely than to be the trial run for some straight Girl/s culturally sanctioned hetero sexual dalliances. Since the innate Lesbian ability to find one another has diminished in the last hundred years making Lesbian teen romance fraught with even more difficulty, some Tips for Lesbian teens in avoiding the pitfalls of Lesbian/Girl teen crushes/romances and for potentially finding each other:
dirt