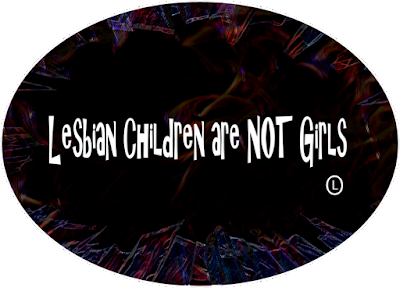 Taking the next step in this post, I'll discuss how the HETERO sex categories of Girl and Woman have lead to centuries of discomfort, dysphoria, pathology and transition (Trans Trending) for Lesbians.

A well known, but until now unexplained commonality among Lesbians (no matter the variety) is feeling different from our earliest memories. Something that goes well beyond not merely fitting in with kids our own age. Our different is SO different, that as children (teens/adults even) we cannot locate ourselves anywhere. We are told we're girls, but nowhere among girls do we exist. This is often something that is pigeon holed as only occurring among Girls who are tomboys or baby Dykes or baby Butches, but the truth is, it occurs among ALL Lesbians, even the girliest of Dykes.Why? The simple answer is because we're Lesbians, but what does that really mean beyond attraction?

The very thing that makes us Lesbian is discussed somewhere between rarely and never and that thing is our brain, singular. We do not need two females or even two Lesbians, to be Lesbian. Lesbian isnt an action, Lesbian is a noun. Our Lesbianism was mapped out as soon as our father's sperm met our mother's egg. And based on that gene map, our Lesbianism, with each trimester created us accordingly. Thats the dry clinical simplistic breakdown of Lesbian, but how does that translate in the world as we know it for Lesbians?

One does not have to be a child psychologist to know that behavioural differences among general heterosexual males and heterosexual females is recognizable in infants/babies. As Lesbians, we've all been told childhood stories by our mothers/fathers and other family how we werent ever like normal girls. How we were more action oriented than Girls, more interested in how our toys worked rather than the toys themselves. Not doll or baby doll crazy. Crawled/walked before our sisters or girl relatives. Were either fine with playing alone or preferred it. More maverick than mainstream. Mrs Dirt for example, preferred girly little dresses, but her maverick behaviour for climbing trees or over barbed wire fences forced her mother to put her into pants more often than she would have liked. Girliness or lack there of (per heterosexual norms) does not define the Lesbian, but having a Lesbian brain does Re-define/unhinge girliness or lack thereof  (per heterosexual norms) in Lesbian children.

It is this doing Girl differently that sets Lesbian children apart from Girls. We as Lesbian children know we're different and once around Girls our age, we know they know it! Usually by age three, Lesbians (no matter the variety) do not comfortably identify with the category Girl. Girls may resemble us, Girls may even dress like us, but we know they are not us. Girls do not simply confuse boys, Girls confuse Lesbian children as well, a pattern of behaviour that doesnt change as Girls age!

Some general but accurate early observations every dyke has noticed about Girls by age five at the latest:
And all this up to a decade before puberty generally hits. Lesbian children are often stumped/confused by the odd (to us) behaviour of Girls and most of us by school age do not feel we are Girls-because we effectively after all, are not-we are Lesbians.

It also signifies to Lesbian children that we are in fact NOT Girls:
This wrongful identification, lack of understanding and blind heterosexual assumption of Lesbian children, beginning with parents/legal guardians set Lesbian children squarely in the locomotive path of confusion. Lesbian children are born with an intrinsic Lesbian esoteric sense of self untranslatable into language, since all known languages are heterosexually created/driven. Despite language's lack or absence, for natural purposes of survival, Lesbians can recognize each other. Our innate ability to pick out/pick up on other Lesbians/Lesbian children (mirroring) is another chapter in Lesbian children not seeing ourselves in Girls. In the same token, Girls do not see themselves in us.