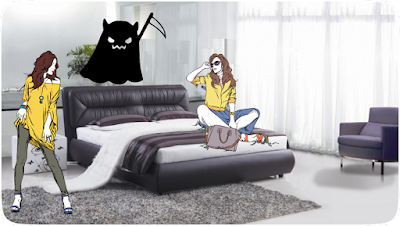 Lesbian Bed Death has been proved and disproved in equal turns for years, depending on which s/expert you ask. The trouble is, like EVERYTHING concerning Lesbians, the s/experts are neither s/experts nor Lesbians! And as such, havent the foggiest idea on how to tell who is a Lesbian unless sex between two females is involved, which isnt always indicative of Lesbian.

The criteria used by lesbian s/experts in identifying Lesbians is based solely on (dual) action, as in Lesbian is something women do together, not something we ARE apart. And therein lies the first crucial flaw in Lesbian Bed Death, incorrect data.

The next and most important crucial flaw in Lesbian Bed Death then is, if the legitimacy of the lesbians involved in these hetero-subjective studies/hypothesis cannot be verified, any data collected is tainted/false.

Where Lesbians are concerned, s/experts have yet to trouble themselves with the little detail of are we dealing with 2 Lesbians, 2 STRAIGHTBIANS or a Lesbian and a STRAIGHTBIAN when writing about "lesbian sex" and/or Lesbian Bed Death. Lets be honest, most s/experts would be hard pressed to notice the differences between these couplings, let alone have the capacity to comprehend how STRAIGHTBIAN couplings or Lesbian/STRAIGHTBIAN couplings give inaccurate information on Lesbians/Lesbian relationships/Lesbian sex lives. Unless data comes from TWO Lesbians in a sexual/romantic relationship, ALL data is fictive.

Two STRAIGHTBIANS together most certainly results in a sexually passionless relationship, no matter the number of things they may have in common. Both are and remain romantically and sexually attracted to men, regardless of their CHOICE to couple. Neither are Lesbian, therefore their unrumpled bed isnt Lesbian Bed Death, but STRAIGHTBIAN Bed Death!

A Lesbian and a STRAIGHTBIAN in a relationship may for a short time seem to be passion filled, the Lesbian seems emotionally/physically attracted to the STRAIGHTBIAN and the STRAIGHTBIAN finds the unknown/forbidden exciting, but the STRAIGHTBIAN'S romantic and sexual attraction toward men remains and the fire is extinguished shortly after it flames, even if the coupling continues for years. Again, NOT Lesbian Bed Death because only ONE Lesbian is involved in this coupling.

All studies and schools of thought who have written about Lesbian Bed Death based their pseudo science/self reporting primarily on the above sets of couples, NOT on biological Lesbian couples! When BIOLOGY is absent from romantic couplings, so to is chemistry. Thats not to say any two Lesbians will have romantic chemistry. Our shared biology wont guarantee endless passion and smoldering days and nights, but this is to say, without a shared Lesbian biology, passion isnt even an option.