In this blogs ongoing efforts to document/display and dissect the harmful ill effects STRAIGHTBIANS have rained upon Lesbians, recruiting has yet to be discussed. In past decades STRAIGHTBIAN recruiting has consisted of RadFems (who are neither radical nor feminist nor lesbian) and other feminist groups trying to reign in more heterosexual members by heralding ANY woman can be a lesbian or choosing to be a lesbian is radical and feminist etc. While DICKsgusting and highly problematic and nevertheless a topic for a near future post, today I'm going to address a more dangerous recruitment that goes beyond Lesbian co-option and STRAIGHTBIAN proximity to Lesbians, it goes to the very heart/beat of Lesbian. And while dealing with a specific STRAIGHTBIAN, bear in mind, she-Dara Hoffman-Fox-is only a shard of the iceberg. 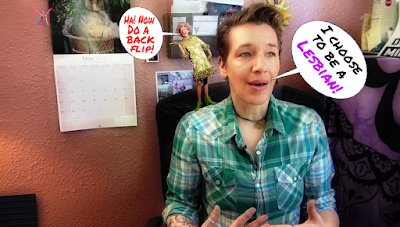 Dara Hoffman-Fox is in her own words: "a Licensed Professional Counselor and a gender therapist in private practice. My hope is to be a part in empowering, encouraging, and supporting transgender and gender non-conforming individuals through education and shared experience."

Our barely accredited dear Dara-wait,lets take a quick peak at her credentials before moving on:
In other words, Dara has a disk jockey degree, an online degree from the Uof Phlunkies, a license in non specified counseling, a WPATH membership which anyone who pays $210 dollars can obtain, a hippy-dippy Jung Society membership and L gbT chamber of COMMERCE also requiring only a moola for membership, all wrapped in a not so tightly KINK PROFESSIONAL or as we know it-STRAIGHTBIAN bow!

Moving on, STRAIGHTBIAN Dara Hoffman-Fox has put together a self published guide (a guide so poorly written/put together her own publisher father wouldnt publish it) to encourage (primarily) Lesbian youths into transition by helping them discover their TRUE gender identity. 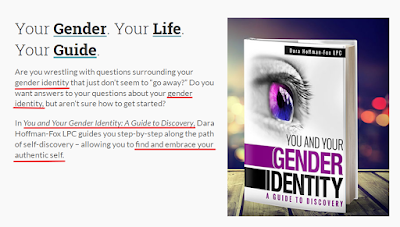 Even though STRAIGHTBIAN Dara doesnt even have the expertise to uncover/understand HER own identity issues:

Based on Dara's own admission in HER video above, she's tried on more outfits/identities (they're one and the same to HER) than a school kid trying on clothes in August! Another such outfit/identity Dara is trying to sport is Lesbian. According to Dara, SHE calls HERself a late-blooming lesbian which she defines as:

In STRAIGHTBIAN fashion, Dara Hetsplains Lesbian to fit HER current choices, meaning choices that as choices are subject to change! Sorry Dara, Lesbian is genetically mapped from inception, it is NOT a choice! And where the idea of Lesbian is subject to choice, it is nearly ALWAYS male driven/sexual abuse suffered from a male driven! It was rare in the past for Lesbians to come out later, it is even more rare today. And where those instances are true Lesbians, like all Lesbians they knew from their earliest memories they were Lesbian, even if they didnt have a name for it. They did not choose to be spinsters or partner with men, they instead felt they had exactly NO choice!

Dara Hoffman-Fox made a choice to co-opt Lesbian and is now using HER choice to solicit Lesbian lives through slight of hand propaganda disguised as therapy where vulnerable Lesbian youth are being turned into transgender grist in transgender transition mills. Serving dear Dara in both pocket and warped STRAIGHTBIAN self satisfaction! But dear Dara, even if every Lesbian alive was shoveled into a living transgender grave, you Dara will STILL be STRAIGHT!