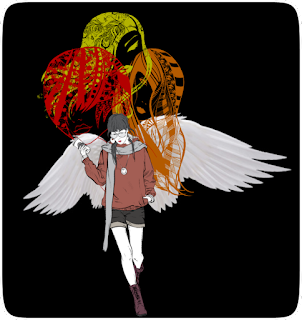 Portrait A: She is often the victim of child sexual abuse, usually perpetrated by her father/father figure/s. Sometimes her mother knows she is being abused and turns a blind eye. This strange abusive familial coupling solidifies her hatred of both men and women. Men for abusing her and women for failing to love/protect her.

Portrait A-a: This is a subcategory of Portrait A's. In this category we often find the special snowflake types. Women who may have grown up in an atmosphere where sexual overtones were in the air but never quite crossed over into sexual abuse. Regardless, these women grew up feeling like they werent heard enough, loved enough or told they were special enough. We often later find them to have many body piercings, tattoos, outrageous outfits such as angel wings, crazy platform shoes, studded or clothing with chains/safety pins etc, multi coloured hair, goths, queers etc. You will find many with a litany of adjectives in front of their names. They may be promiscuous, they may have both boyfriends and girlfriends. While they might frequently when younger date Lesbians, they dont usually abuse/use them beyond bragging rights (I'm dating a Lesbian now-I'm so cool). Most grow up, marry a man, have kids and move on.

Portrait B: She may not have been sexually abused, but she is straight, left handed/right brained. Her right brainedness makes her feel different from her peers. She is both attracted to boys and repelled by them. During puberty and early adulthood she may confuse not feeling like other women and her dislike/discomfort with the power dynamics between male/female relationships for Lesbianism. Many Portrait B's will be attracted to Feminism/academia; even becoming leaders in Feminist groups. They may insist to other group members that Lesbianism is a political choice. Many speak or dream of a feminist separatist utopia where they are the leader. They often try to appear in heterosexual notions; unfeminine. This unfemininity, in their straight brains, is how they perceive Lesbians to look/be. Many will say that they have consciously eschewed femininity, believing the feminine or non-feminine are merely patriarchal fashion choices to be donned at will. Online they will often change their screen names and/or have dozens of different online personas.

Portrait C: She may be a combination of Portrait A and B. Portrait C STRAIGHTBIANS pose a more sinister danger to Lesbians. Their right brainedness which makes them naturally good at math/science/map reading etc is shared by MANY dykes. They legitimately speak of always feeling different as far back as they can remember from other girls. Because feeling different from our earliest memories is so common among Lesbians, when we hear another woman speak of it, we too can mistake that familiarity for Lesbian. But their psycho/sexual pathology doesnt bond them to Lesbians, it pathologises itself in the form of a dual hatred of dykes. They hate us because they cannot be us (not desire men) and they hate us because we're women.

Portrait D: This is the smallest minority of STRAIGHTBIANS. Portrait D's are an EXTREME form of Portrait C's. Extreme because their sexual/mental abuses were so tremendous, coupled with their right brainedness they later identify and even idolize their male abusers. This idolization turns them into abusers themselves; usually abusers of women, mostly straight women who have also been abused as children. Their warped worship of male abusers/men even lead some to transition. Their heterosexuality will often display itself in the form of sex with young men, with a preference for underage males. Their sadism with women will often take the appearance of  sex, because nudity/genitals etc are involved, but Portrait D's like all STRAIGHTBIANS lack sexual desire for women. Their only desire for women is to hurt them. Their heterosexual desires will often come alive with male youths; partly because their attraction is to males and partly because their maturity puts them in a power position over young males. In and of itself they may seem to pose more of a threat to male youths than dykes, which is true. But what is also true is, they play out their sexual psycho-pathology of sadistic sexual abuses of women and boys under the rubric of Lesbian and often in academia!

Some general statements and subjects (by no means complete) routinely made by/on the lips of STRAIGHTBIANS:
While many issues listed above are of the utmost importance, few are Lesbiancentric, Lesbian accurate or seek to improve the lives of Lesbians.

This clearly is a general overview, were we to detail each Portrait and sub Portrait we could fill a text book (a later project) and obviously it does not explain the history/behaviour of every single STRAIGHTBIAN ever. But we are confident that Lesbians can and will benefit from a greater awareness of and psychology behind straight women who seek out Lesbians to date, who with straight privilege in tow and heterosexual lens firmly in place define and DICKtate Lesbian to society and to Lesbians ourselves and who all around have been to Lesbians what AIDS has been to gay men.