Lesbians do NOT Eschew Femininity

Radical Feminists, STRAIGHTBIANS, Separatist Lesbians and other assorted Lesbian posers have for the last 40 years spoke of eschewing femininity, demanded women eschew femininity and claim Lesbians eschew femininity all over the place. The idea being if all women ungender themselves (like Lesbians) then men will magically cease to view women as sexual objects, give women the key to all areas of business that shut women out and women will have the money and power and equality with men all women purportedly desire as claimed by a few RadFems.

The very idea of eschewing femininity by early Radical lesbian Feminists and Women's Lib groups spawned from Lesbians joining feminist groups under the assumption that FINALLY straight women have awoken. Lesbians could lend themselves to a female cause that would benefit us in work area's and a cause that had the (Straight) strength in numbers that Lesbians have historically lacked. Styles of being/culture that are natural to many Lesbians were quickly commodified by RadFems. Lesbian culture now firmly in the soft lily white palms of RadFems quickly metastasized into Feminists everywhere eschewing femininity for equality. Even DICKtating to Lesbians then who joined RadFem groups to be more androgynous or be off.

What precisely was this femininity RadFems and other Feminists were/are so keen to eschew?

A sample of Radical lesbian Feminists STRAIGHTBIANS who have eschewed femininity:

The notion that Lesbians eschew femininity is ignorant as it is lezbophobic. It implies that dyke is simply something Lesbians put on in order to remove ourselves from the dreaded Male Gaze, in order to complete with men and in order to solicit the attention of women. Here's a clue, Lesbians do not go around thinking about the Male Gaze and how we can escape it, we dress for comfort not politics. We do not think at age 1 or 2 that hey I dont wanna wear that dress cuz the boys might look at my sexy newly formed legs or try to look up my dress to see my diaper, we dont think about it at all! Lesbians dress according to our Lesbian brains that go with our Lesbian bodies, both quite different than that of heterosexual females. Even Femmes or Lipstick Lezzies dress/occupy clothing stereotyped as feminine completely different that straight women, they wear a dress, it does NOT wear them-EVER.

Radical Feminists/Feminists derived the idea that femininity could be eschewed contributing to the onslaught against Lesbian as biology, Lesbian as REAL. Eschewing femininity helped to sell the idea that just as easy as high heels could be kicked off sore feet or short skirts replaced with comfy pants, so to could straight feminists remove men from their relationships and replace them with comfy Lesbians and with a simple change of outfit become Lesbians themselves.

RadFems/Feminists HATE (their own) biology and early on worked to bulldoze biology into oblivion and in doing so undermine Lesbian, co-opt Lesbian and redesign/define Lesbian into an unfeminine one-size fits all couture. Lesbian has become the little black dress in every RadFem closet. Clothes are for fucking closets, and closets are the only fucking things LESBIANS have fucking eschewed! 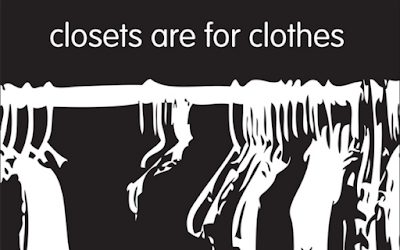