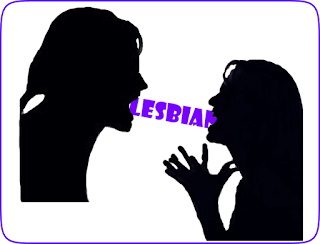 Somewhere between Radical Feminism and Straightbianism, Lesbian has become sooooo Hetsplained the very biology of Lesbian has become suspect. As a result, Lesbians (particularly those who are outspoken) have become a problematic thorn in the side of RadFems/STRAIGHTBIANS and other assorted special snowflakes. Problematic because some of us Dykes are unstraightening decades of RadFem Hetsplainations of what a Lesbian is, who can be a Lesbian and what Lesbians do in bed/with/without men.

Being of the introvert variety, when I first began thinking about what it means to be a Lesbian, beyond childhood crushes or school girl flirtings, I did what most introverts do-I read. Being poor in pocket but rich in resourcefulness, I quickly discovered books/chapbooks and mailing lists from the love that dare not speak its name. And it didnt then. Instead I received manila envelopes sans all identifications save my address. Once opened I would read intently! Hoping with each word I might find something my Lesbian brain could identify with. It swiftly became apparent that outside of the girl on girlness in most of what I read, I shared little in the way of Lesbian feelings or Lesbian experiences. Whether fiction, nonfiction, poetry, the personal or the political, I found myself a step child among gaggles of sisterhood. Sisterhood, on casual inspection, fighting for civil rights, women's rights, anti-pornography, prostitution, domestic violence, AIDS, the ERA and whatever patriarchy did or didnt do from minute to minute and doing often in the name of Lesbian.

Once I traversed the page and met/befriended other Lesbians in and around my area, it was crystal clear, I wasnt the only dyke puzzled by Radical lesbian Feminism/ists and other lesbian separatist movements DICKtating some bizarre brand of Lesbianism that was not Lesbian at all. There was something both comforting and frustrating in this realization, comforting because I knew I wasnt the only dyke confused by a politic of lesbian that didnt include Lesbians and frustrating because there was nothing we could do about it. Although I do recall in my 20's trying to get my money back for several lesbian books when they failed to be about actual Lesbians. I was told by a store manager that since they said Lesbian and were in their small Lesbian section, that they were in fact Lesbian books. My returns were refused on the grounds Lesbian was in the title of both books, who the fuck cares if they were written by academic STRAIGHT women bored with men! I cared! And I knew other Lesbians cared. Even if our dissatisfaction and disgust never went beyond the four walls of our homes or the dark walls of our lone Lesbian bars.

I remember there was talk and hope among Lesbian friends and Lesbian comrades about the potential of the internet to increase real Lesbian visibility and for a very short time, in the early 90's, it seemed it had. But with that visibility came more RadFem/STRAIGHTBIANS out of the woodwork cashing in on the Lesbian 5 minutes of front page news. Not because they were Lesbian, BUT because their heterosexual looks whether plain or funky was more palatable/desired by the masses than our abnormal normal would ever be. What mattered was how they appeared, more importantly how they appeared together, not who they were apart. Some were what we used to call the 4 year lesbian or later hasbians. Swept up in the tide of RadFem politic where EVERY WOMAN CAN BE A LESBIAN mantra was used to bait women away from dreaded patriarchy. Only problem with that was (is still) not being Lesbian, they always go back to patriarchy, whether directly in romantic relations with men or seeking ways to keep males in proximity by playing schoolyard boy/girl games (both online and off) or worse focusing all their energy on patriarchy/men-even the men who fetishize women.

Listen up Lesbian readers, if patriarchy/males are the central focus of your new your lesbian crush, your new lesbian icon, your lesbian professor etc, if they're screaming TRANS WOMEN ARENT WOMEN or ANY WOMAN CAN CHOOSE TO BE A LESBIAN crock of shit, trust when I tell you-they not only are not Lesbians, they are heterosexual and in far too many instances mentally/emotionally damaged heterosexuals.

One thing always pointed out when this blog or myself (dirt) comes up in conversation (aside from insults) is dirt writes mostly about Lesbians/Lesbians who transition. Hmmm why might that be??!! Oh wait for it....wait for it...not quite yet...wait for it some more...DIRT IS A LESBIAN!

Does that mean by being a Lesbian my entire life is about my sexual/romantic relations with former girlfriends or my wife? No. Of course it doesnt. Because being a Lesbian has never been dependent upon a female lover. It is however solely dependent upon my Lesbian brain/biology. And as such, my personal and political focus is naturally going to be on Lesbians.

I say this and my wife says this and we both reiterate the hell out of it, not to preach some new Lesbian separatist gospel, but to help Lesbians get in touch with their core Lesbian survival instincts that have gone dormant:
Lesbian survival IS dependent on our natural Lesbian instincts/intuits to recognize each other and prioritize Lesbians as a whole. We still live in a world that hates us, and no matter how much marrow has been siphoned from our Lesbian bones, the watered down least offensive palatable occasionally public lesbian has done nothing to make real living Lesbian lives safe, less feared or less despised. Instead Lesbian concerns, Lesbian issues, Lesbians voicing our concerns and issues go either unheard or when we scream too loud to be deafened we are pshawed.

For instance, a week or so ago (and this example has been duplicated bazillions of times throughout internet sites/forums/social medias) a HETSPLAINING RadFem who CHOSE to be a lesbian Tweeted something about the hypocrisy of the crimes a trans male murderer being attributed in the media to as a "woman". And as DICKgusting as that most certainly is and most certainly deserves to be challenged, its equally DICKgusting coming from a STRAIGHT woman conveniently with hetero privilege of forethought to call out while co-opting Lesbian! Following her lead in calling out this blatant hypocrisy, I called hers out, my Lesbian concerns were in fact pshawed and when that failed, reinforcements were rounded up and the same old tired Lesbian insults were thrown: 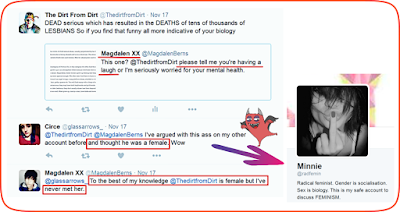 And when called on the insults, in typical hetero female fashion, retreat and subtweet. Lesbian concerns for Lesbian authenticity fall on deaf RadFem/STRAIGHTBIAN ears again.

When LESBIAN Brandy Stevens-Rosine was murdered, where were the RadFem/STRAIGHTBIANS then? Outside of a few MEN who mentioned her murder/trial, not a single known or for-that-matter unknown RadFem/STRAIGHTBIAN mentioned her or busied themselves UNSTRAIGHTENING the varying headlines of LESBIAN LOVE TRIANGLE murder. Instead we received just the opposite:

Its pretty obvious (to Lesbians) that the murderers of Brandy Stevens-Rosine were NOT Lesbians, but VERY disturbed STRAIGHTBIANS: 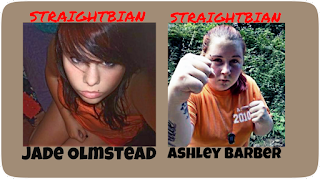 A cursory glance at both their backgrounds reveals classic (borderline) STRAIGHTBIAN signs, so why didnt any RadFem (lesbian) work to correct the media's mistake as RadFems/STRAIGHTBIANS routinely do when a male criminal is wrongly labeled a woman? Because in doing so they too would have to admit they are not Lesbians themselves! Oh they will throw the word Lesbian around whenever it suits them, but come to the defense of an actual Lesbian, emotionally or financially support actual Lesbians, go out on a limb for a Lesbian, no...that they cannot and will not do.

My wife was going through some old pictures a few days ago, and showing me a picture of herself with six other Lesbian friends, she sadly commented that four of the six Lesbians were all kicked out of their families for being Lesbians. A few were later able to slightly have a distant relationship back with their parents, and few others, even today, have none. Even where Lesbians think and feel they have been lucky/blessed with how their families acted/reacted to their Lesbianism, when push comes to shove-we too realize even those we believed had no issue whatsoever with us, instead find the opposite true. Love/respect/acceptance etc might not be as UNconditional as we once thought. This election year proved that to many Lesbians throughout the country, including myself.

There are REAL life consequences to being a biological Lesbian, rather than a lesbian of convenience, straight escape or attention. REAL Lesbians arent playing footsie online with men, we're beaten or banished from our homes by our families. REAL Lesbians arent overly worried about a dude in drag hearing us tinkle at Pizza Hut, we're more afraid our legal marriage rights are going to soon be revoked. REAL Lesbians arent celebrating the publishing of our latest book or news article, we're trying to figure out how we're going to afford healthcare if our marriage is revoked. REAL Lesbians arent globe trotting to faux feminist conferences they themselves financed just to hear their own voices, we're wondering how we're going to pay our bills AND do Christmas because we're stuck in low paying jobs because regardless of qualifications "we dont hire your kind here".

Trust the Lesbian instincts you were born with. Let them be your Lesbian guide and not the prostrate Radical Feminist or the histrionic STRAIGHTBIAN or any of the watery special snowflakes dropping from the sky.