This post is the latest in our Unstraightening Lesbian series, uncovering women who have claimed to be lesbian experts when in reality, they are neither lesbian nor expert.

Today's offender is Loree Cook-Daniels aka The Grim Reaper, who has been mentioned previously in the post Straightbians You May Know. Loree is the epitome of the most dangerous Straightbians of all. Unhappy with hetero-domesticity, Loree hitched a ride on the radical feminist bandwagon, where she was given the green light to call herself a lesbian. 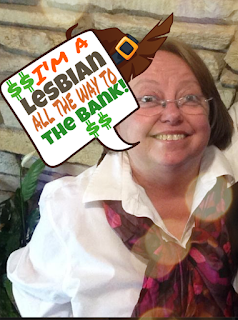 She partnered with an insecure dyke whom she pressured/supported STRAIGHT into transitioning. Her partner, Marcelle, could not adjust to transition and later committed suicide.

Loree's work continues to focus on transgender people and issues, and she lies to herself and others by claiming outright falsehoods such as:


"many (lesbian) partners discover they actually have a preference for FTMs"

After her partner's tragic suicide, apparently not comprehending that transitioning did not provide the much-ballyhooed "life-affirming" benefits to her partner as promised by the trans propagandists, Loree took it upon herself to do everything in her power to "support" even more lesbians STRAIGHT into an early grave. 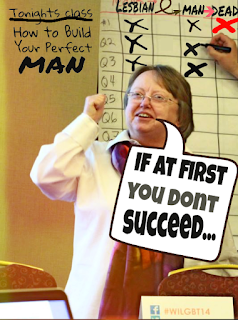 Loree is so pro-trans that she has even been dubbed the trans "partner's partner" (whatever that means), and she states proudly in an interview that:


"I’ve been partnered with a trans person for a total of 32 years now...First of all, I don’t identify as cis. But secondly, I’ve been working on trans issues for more than 20 years, and from the beginning I have had a really strong commitment...I would meet some people’s definition of a 'tranny-chaser.'...I have a spiritual belief that I was put on this earth at this time for a purpose..."

What purpose is that Loree? To destroy as many Lesbian lives as you can?

Loree was even celebrated by the Milwaukee lgbT History Project with a biographical panel:


"In 1983 Loree began a seventeen-year relationship with Marcelle Daniels. During the first nine years of their relationship, they confronted and overcame many challenges as an interracial lesbian couple, and Loree rose to prominence as a lesbian-feminist activist...When Marcelle began physically transitioning, Loree began her own transition – from lesbian-feminist activist to trans activist."

At least the Milwaukee lgbT History Project got the main thing correct about Loree, which is:

Loree used lesbian for all she could wring out of it, then she jumped onto the trans bandwagon faster than she could say, "Adios, Lesbos!"

Today, Loree and her current trans partner work for "a national education, advocacy, and support organization for FtMs and partners".

As part of an Oral History Project, Loree states the following:


"I no longer claim a sexual-orientation label. I gave that up many years ago when my first partner transitioned...I dated boys (but) I think I was calling myself lesbian or bisexual fairly early on...(At the time Marcelle decided to transition) At that point in time I was extremely lesbian identified and had constructed my career around being a lesbian...(Now) I am a full-time transgender activist."

It is IMPOSSIBLE to miss the theme running through the STRAIGHTBIANS we've featured in this series, which wasnt fully noticed even by us until we began working on this project. Each and every STRAIGHTBIAN we've discussed, first co-opted Lesbian and then made some sort of career out of calling themselves Lesbian as Cook-Daniels so grossly points out.

Loree Cook-Daniels IS the worst kind of STRAIGHTBIAN, like a pedophile singling out his next victim, Loree Cook-Daniels preyed on the weakest, most insecure dykes in effort to create her perfect man. Using both her heterosexual privilege AND at times her white privilege, Loree Cook-Daniels twisted less fortunate lesbians into a warped/whipped version of  men she could use/abuse/dominate and control, even if it killed them.