This post is the latest in our series, Unstraightening Lesbian: Removing the Heterosexual Lens exploring the top "Dirty Dozen" of offenders who are purported to be "lesbian experts" but who are neither lesbian nor expert.

Today's fraud is Sarah (“I want to know that my lover is a man. I need to be able to say that”) Schulman. Schulman is a prolific and frequently lauded "lesbian writer and activist". In fact, she is such an industrious writer that there is no way to critique even a fraction of her work in one post, so we will have to pick out the top few points that are MOST offensive to lesbians and misrepresentative of lesbians.

Let's start with the example provided in our teaser post: Schulman's X-Rated writing for the film Mommy Is Coming.  (Yes, you read that right, but read it again if you enjoy getting grossed out: MOMMY. IS. COMING. Ewwww...).

The following is an excerpt from Julia Bryan-Wilson's review of this gem:


"Mommy Is Coming (2012), which was cowritten with novelist Sarah Schulman and premiered in Berlin this February, Dunye looks again at queer sexuality, presenting it in its most flamboyant registers. An international cast drawn from loosely defined queer and gender-deviant creative communities is here conscripted into a meditation on the tropes and cliches of pornography. The film involves many explicit sex scenes, strung together with only the thinnest of narrative tissue: Within the first few minutes, a woman gets fucked with a pistol in the back of a cab in broad daylight."

Um...Queer. Flamboyant. Gender-Deviant. Fucked with a pistol. Yuck. It is obvious that Schulman's vision of lesbian life depicted here is quite a bit different than actual Lesbian life.

Moving on to our next example: Sarah Schulman wrote one of Susie Bright's favorite all-time sex stories. (Here's a hint: If Susie Bright, Straightbian Extraordinaire, likes something, rest assured that it is neither lesbian nor something an actual lesbian would like). 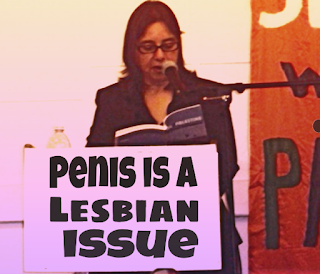 The title and subject matter of this bizarre, fetid and foul story are enough to prove that Schulman is not a lesbian:  "A Short Story About A Penis": 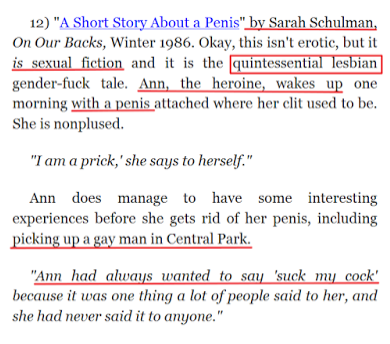 Hmmm, what's next? So much bullshit, so little time.

Oh, we know!  Here's another example of Schulman's pretentious perversions:

Schulman's book The Child, in the tradition of fellow Straightbian offenders Pat/rick Califia and Gayle Rubin, reframes pedophilia as a supposedly perfectly normal situation that is being hampered by crazy "sex panic" in society. 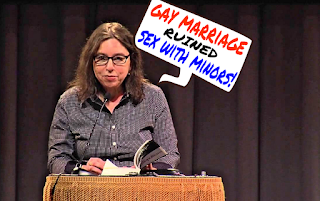 Schulman apparently believes that pedophilia is a positive experience, and that the rest of us shouldn't worry our silly little heads about it. 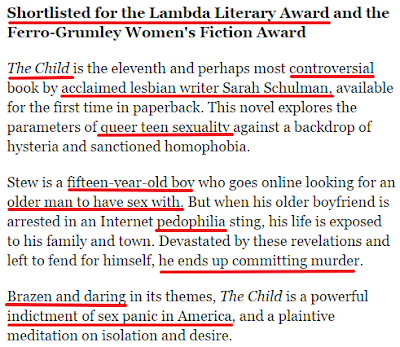 In an interview about this book, Schulman states the following:


"I remember when everyone I knew was telling coming out stories about having sex with adults. It wasn't shocking...It wasn't scandalous. It was for the most part pretty positive. At the very least, it was normal."

Schulman, in the same interview, demonstrating her twisted Straightbian perverted thinking, goes on to blame gay marriage on society's non-acceptance of pedophilia (huh??):


"Once the whole Gay Marriage Thing came up, all of those stories just disappeared. You never hear them anymore. With the attention that gay marriage was given in the media, queer presses didn't want to print anything that would come across as scandalous and mainstream presses continued to boycott queer content in general."

Well, Sarah, sorry, but you'll have to excuse us REAL LESBIANS for wanting to have basic civil rights and equality.  God forbid our quest to recognize our loving unions step on your pro-pedophilic predilections.

And we aren't "queer" either, you pompous buffoon.

Furthermore, Sarah, why do you have an obsession with gay MEN, as evidenced in this book and in many other publications and interviews?  It is one thing to stand in solidarity with gay males, it's another thing entirely to fetishize them.

Moving on to our final example, which understandably caught our attention amongst hundreds of other contenders:

Sarah Schulman resigned as editor when publishers expressed obvious concerns over her inclusion of a story by Ella Boureau in a Lesbian SEX Anthology involving underage child cousins and bestiality was not included.

Yes, you read that right.

Now, read it again and THINK ABOUT IT:  Schulman's idea of a good "lesbian" sex story involves underage children, incest, and animals, and she felt so strongly about it that she resigned from a position over this issue.

Schulman and the story's author, Ella Boureau, were so busy crying foul due to alleged "censorship", that they missed the crucial point of this situation:

Sex stories involving children, incest, and animals are NOT LESBIAN, they are fucking pathology and therefore do NOT belong in any sort of lesbian anthology or ANY anthology EVER.

Also of importance to this particular situation is that the publisher involved is the very same one that has freely published other non-lesbian, inappropriate, perverted, and offensive rubbish by the likes of Pat/rick Califia and Susie Bright: Cleis Press.

In other words, since Cleis Press didn't blink an eye about publishing those 2 perverts, then this particular story, by definition, has to be so offensive, so controversial, so perverse, so deviant, and so disgusting, that even they won't touch it with a proverbial ten-foot pole. And that is saying A LOT.

The entire story, entitled "Cottonmouth" (Spoiler Alert: the animal involved is a SNAKE), which can be found here, is way too vile to delve too deeply into in this post, but here are just a few excerpts from the story that was so staunchly defended by Schulman as a fine example of alleged "lesbian" erotica:


“'Snakes are kinda sexy, if you think about it,' Lou said...'The way they move, all stealthy-like, and the way their bellies curve and coil and slide. Even their poison is sexy.'"

"The cottonmouth approached her c**t, its tongue fanning..."

"The cottonmouth’s vibrating tongue was still at her outer lips. Then, in one incredible moment, it pushed its way inside her. Louise inhaled sharply.  The reptile slid in neatly. Louise felt full, the scales undulating her inside flesh, a long earthy muscle twisting."

And that, my friends, is the hill that alleged "lesbian activist" Sarah Schulman decided to die on.

Sarah Schulman is a unbalanced, attention-seeking, controversy-loving, pedophilia-promoting Straightbian who is misusing "lesbian" for her own purposes and profit.

And that is why she is one of the "Dirty Dozen".