This is the final (for now) post in our Unstraightening Lesbian series, which profiled 12 of the numerous Straightbians who have co-opted "lesbian" and purported to be lesbian experts when, in fact, they are neither lesbian nor expert.

Our final offender is Minnie Bruce Pratt, who is probably known as much for her disjointed thinking/writing as for whom she was partnered/married (Leslie Feinberg).

Her definition of lesbian is as shallow as her understanding of it:


"As I say somewhere, one definition of a lesbian is a woman who has a job." 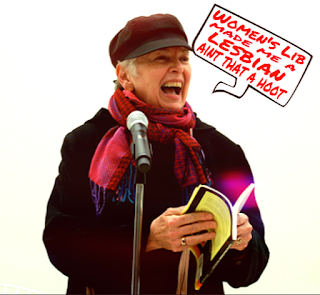 Rather than by-products of birth, through Women's Lib Pratt came to believe her heterosexuality, like her femininity, could simply be unlearned. Were that true, even in the slightest, Pratt's heterocentric behaviour/lens obviously weren't unlearned enough.


"And Julia was being very — you know, like, oh god, something about toilet seats, I can’t remember. It was some outrageous thing, you know, [like] Lesbianism is catching, a lesbian just sat here on the toilet seat, or something, I don’t know...And Julia was furious, and just screamed at me. But the thing that really got me the most was that she said my name in this very belittling, contemptuous way. And I know it doesn’t sound like much, but to have someone use your name in this very contemptuous, sarcastically demeaning way was just devastating...So I left that session and I went into the bathroom crying. I was just crying. Sitting in the stall, crying. And Harriet Desmoines, Ellenberger now, came after me and said to me, “I thought you might be upset. Don’t be so upset. Don’t be upset. Julia always talks to femmes like that.” Now Harriet, being a femme herself, having dealt with Julia, because they moved Sinister Wisdom to Nebraska, I’m sure knew what she was talking about."

"...what was happening is that we were a generation of women who had been acculturated, all of us, into femininity, so we had to break with our acculturation into femininity, and learn how to change the oil in our cars, or how to change tires and how to do all this stuff that we had not been allowed or taught to do-wear pants, wear fatigue pants, which I did for years. I had got, wore this stuff out of Fayetteville. I would to go the army stores and buy, you know, these paratrooper pants. I was wearing boots and paratrooper pants. But I was also wearing little pink voile tops with  orange ribbons."

"So, breaking with that femininity, learning how not to be passive-aggressive, not sneaky, not, you know, not woman-to-woman passive-aggressive, you know, all that stuff, we had learned. About how to be with each other as women. We had to unlearn it all. So we went in this other direction which, to us, was around androgyny. It’s like, OK, we’re not going to be feminine women. We’re going to be androgynous. Not all of us did that, um, but I certainly did, because I had a lot to unlearn. A lot to unlearn"

It is clear from Pratt's hissy fit and Straight(bian) Women's Libber ideas that (her) femininity could simply be removed from (her) mind and body and replaced with sensible shoes and a few basic life skills outside her comfort zone.

Were you to have nothing else ever written by Pratt, this alone would be revelatory enough to reveal Pratt's heterosexuality (STRAIGHTBIAN). First where on earth would there be enough Butches and Femmes to do this, and more importantly no Femme, let alone a party full of Femmes would put a Butch in a circle and judge her degree of butchness. Butch is Butch, it isnt about degree thereof. Its grossly clear in the Butch department Leslie Feinberg wasnt a ten and needed testosterone to measure up to Pratt's tastes. 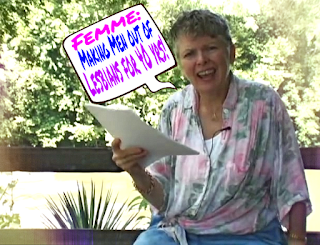 As we've noticed with other STRAIGHTBIANS in this series, Pratt couldnt do anything herself, she instead hooked up with men and/or lesbians whom she believed she could feed her political ideas through and have them turn them into action:


"I never wanted to be with someone for purely personal reasons. It was always about a larger horizon, you know. I was interested in their politics"

And Feinberg fit her political bill, and based on Pratt's (less than impressive) first meeting with Feinberg, meeting her romantic bill would take a little spit and polish or in Feinberg's situation, testosterone.


"Somebody asked me to show her the way to the auditorium. So, it’s very interesting. I remember meeting her, very handsome, great shirt. I don’t think she had a tie on. No, I don’t think she had a tie on. I remember that first moment where I saw her as more slight and smaller than I ever, ever remember again feeling that she was. It was an interesting moment. I remember seeing her and perceiving her as a slight butch lesbian. Thin, but slight I think might be the word. And I’ve never again seen her that way."

Pratt co-opted Femme in the same way she co-opted Lesbian, in the same way she heterosexualized her relationships with lesbian lovers. Pratt climbed lesbians like ladder rungs, with each step up hoping to create the perfect man. In the end, Pratt got neither, man nor perfection.