This post is the latest in our series of posts examining the top 12 of the worst offenders among purported lesbian experts who are neither lesbian nor expert. 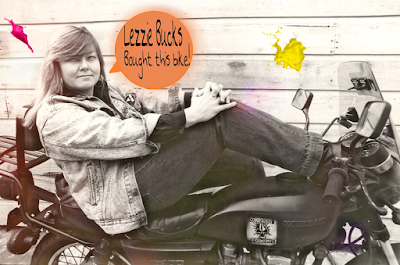 Most would know Dorothy Allison for her semi-autobiographical novel and later made for TV movie-Bastard out of Carolina. The novel depicts portions of the extreme physical/sexual and emotional abuse Allison suffered at the hands (and other male appendages) of her stepfather. And given the graphic nature Allison has written of her intimate past, not to mention her fiction, there is absolutely no speculation on where (sex/violence) figures in Allison's life/work. And based on how sex figures (regardless of where [with women]) Dorothy Allison sits squarely in the middle of STRAIGHTBIAN rather then the self-identifying lesbian femme that she claims to be:


"When I was five, Mama married the man she lived with until she died. Within the first year of their marriage Mama miscarried, and while we waited out in the hospital parking lot, my stepfather molested me for the first time, something he continued to do until I was past thirteen. When I was eight or so, Mama took us away to a motel after my stepfather beat me so badly it caused a family scandal, but we returned after two weeks. Mama told me that she really had no choice: she could not support us alone. When I was eleven I told one of my cousins that my stepfather was molesting me. Mama packed up my sisters and me and took us away for a few days, but again, my stepfather swore be would stop, and again we went back after a few weeks."

Allison has stated outright that sexual abuse informed her lesbianism. We suspect equally this abuse responsible for her ignorant privileged Het notions driving her masochistic sexual tendencies with similar STRAIGHTBIANS from a small feminist collective in the early 70's. Women who chose to romantically/sexually entangle themselves with women/lesbians because they too were sexually abused/damaged or because they were temporarily caught up in the Women's ("we hate men right this minute") Liberation movement.


"Writing Bastard Out of Carolina became, ultimately, the way to claim my family's pride and tragedy, and the embattled sexuality I had fashioned on a base of violence and abuse"

"I became sexually and politically active, joining the Women's Center support staff and falling in love with a series of middle-class women who thought my accent and stories thoroughly charming."

"...I am not only a lesbian but a transgressive lesbian-femme, masochistic, as sexually aggressive as the women I seek out, and...pornographic in my imagination and sexual activities..."

In the same essay Allison goes on to say:


"The compartmentalized life I had created burst open in the late 1970s after I began to write what I really thought about my family. I lost patience with my fear of what the women I worked with, mostly lesbians, thought of who I slept with and what we did together. (Clearly Radical Feminist's and not lesbians) When schisms developed within my community; when I was no longer able to hide within the regular dyke network; when I could not continue to justify my life by constant political activism or distract myself by sleeping around; when my sexual promiscuity, butch/femme orientation, and exploration of sadomasochistic sex became part of what was driving me out of my community of choice—I went home again."

As Allison's sexual proclivities became better known to the lesbian feminist collective and other feminist activists, a rift developed (not unlike today) between so-called "kinky" lesbians and lesbian feminists.

This split is as complicated as it is warped, regardless of which side women took. While the later "Sex Wars" that sprang out of this rift seem innocuous today, the irony involved in this scenario bears explaining.

Both camps hungrily devoured John Money's infamous and failed Gender Identity Theory, denying biology in favor of constructed sex roles where biology magically becomes meaningless, and where male and female bodies possess unsexed/non-sexually-oriented brains (it's as if they think that the brain is not an organ -- that it is somehow mysteriously disconnected from the body in which it resides).

Camp Allison were promiscuous, deviant, sexually aggressive, and sexually violent toward themselves and other women, and some Camp Allison members, specifically Pat/rick Califia and Gayle Rubin, even working to legally lower Age of Consent laws making sex with minors legal.

Camp Barnard, on the other hand, attempted to dicKtate to women/lesbians how to have lesbian sex and what consisted of lesbian sex, particularly a no-vaginal-penetration mandate. Some even went so far as to insist that lesbians do not have sex at all, and that lesbian attraction itself objectified women.

Backtracking, as a result of the Lesbian Sex Wars, Allison and her cohorts helped to organize the (also inappropriately-named) Lesbian Sex Mafia, described by Allison in her book Skin as follows:

"I had helped organize the Lesbian Sex Mafia, a group intended for 'politically incorrect' women...(I) began to do public speaking on sexuality...publishing my essays on incest, family violence, and sexuality...(I) concentrated on attracting members whose primary sexual orientation was s/m, butch/femme, fetish specific, or otherwise politically incorrect."

Allison goes on to say regarding the Lesbian Sex Mafia's demise:

"The most shocking failure of the Lesbian Sex Mafia...was that none of us predicted the kind of attack and vilification that accompanied the April 23, 1982 Barnard Conference on Sexuality, or the speakout on politically incorrect sex we organized to take place the next day....we had not seriously prepared to deal with critics who would be horrified at our behaviour as lesbians, never mind queer queers."

The failure of Camp Allison was that they were so caught up in their own sexual abuses they believed that by reliving over and over and over and over again those abuses as adult women, what they were doing was subversive! It became abundantly apparent to them during the Barnard Conference that other feminists/academics didnt share their noxious Nirvana. Members of Camp Barnard were in fact so disKgusted some members dissected a sexscapade between Allison and two other women in an issue of Off Our Backs.

Allison recovered whatever shame or insecurity she felt over the Barnard scandal and went to write and publish essays, stories, novels-one as we mentioned that made it to film, as well as to teach and lecture at many notable universities. 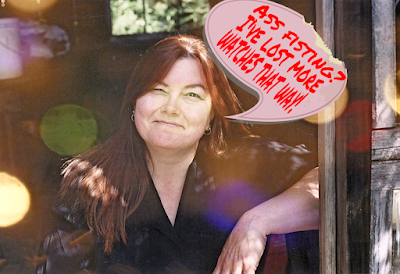 Whatever Allison did sexually we would like to say is her business, but, unfortunately Allison has SO publicly made it ours. Nevertheless, we do not have to purchase her books or go to her lectures and we havent. The problem we have is Allison did whatever she did while (with straight privilege) calling herself a Lesbian. Dorothy Allison won copious Lesbian awards for her writing, awards that paid her well, engagements that paid her well, and lecturing that paid her well. And still pays her well.

Like every STRAIGHTBIAN we have discussed thus far in this serious, NONE of them feel the slightest bit of remorse for shining under a star that doesnt bear their name. How many actual Lesbian writers received rejection letters so that this drivel instead, under the name Lesbian, could be published:

"Natalia was much older than me, and we had been playing school girl and Governess. When I was the Governess, Natalia was my toddler who needed to be washed tenderly, powdered down, sometimes have her temperature taken--'turn over baby'--and invariably be nuzzled gently until she orgasmed in my arms. When I was the schoolgirl, I was a stubborn adolescent who accumulated countless demerits...Natalia decided she would like to play out one of hers (fantasies) and see if she couldn't train her schoolgirl to enjoy having her ass used."

After lots of wine, oysters and a bubble bath:


"Before I could hiccup in confusion she had my wrist tied to a ring on the floor. "Ma'am?" I tried, unsure of which game we were going to play. "Be still," she said sternly. "Don't think, just relax. I want something from you and tonight I'm going to get it." She poured a pool of thick creamy lotion into her palm and began to massage my ass, her blunt fingers pushing dollops of cream up into my butt."


" 'Ma'am,' I wailed, and she purred back at me, 'that's my girl,' while her hand worked its way steadily into my butt. She hurt me and I screamed at her. She laughed at me and I howled at her. But she had all the practice and she knew every crevice, every rudimentary panic, every movement I would make in response to every movement of hers, and nothing I did or said or cried stopped her. After a while she wasn't hurting me, she was guiding me, whispering soft words while her fingers played tickle-touch so deep inside me I wanted to burp."