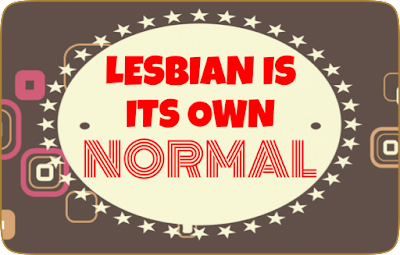 The Unstraightening Lesbian series has been a bit of an arduous journey for both Mrs Dirt and I, and seemingly a bit of a departure for this blog, which heavily focuses on trans females. But what we hope is clear at the end of this series is how intricately linked STRAIGHTBIAN heterosexualized definitions/demands of Lesbian and Lesbian transition are. And perhaps most importantly making it clear that Lesbians and straight women (STRAIGHTBIANS) speak/hear/process completely differently as if we're speaking different languages (and we are). And those differences feed fully into why so many Lesbians have/are and will transition.

Lesbian has been occupied by STRAIGHTBIANS for centuries, were we to have written about simply well known STRAIGHTBIANS alone, even if we both quit our jobs, stopped seeing family and friends and give up sleeping, we would be writing Unstraightening Lesbian posts till our lasts breathes. Meaning, Lesbian has to be legitimately fleshed out by REAL lesbians, for lesbians, by lesbians and about lesbians.

What is Lesbian and what Lesbian has been paraded around as by STRAIGHTBIANS are at opposite poles of the Universe. But because Lesbian has been defined/embodied by STRAIGHT women, Lesbian as we know it has felt somewhere for all dykes between alien and uncomfortable. It is precisely been this uncomfortableness that has led tens of thousands of Lesbians both young and old to fit the HETEROSEXUAL Psychological Complex's Gender Dysphoria/Gender Non Conforming definitions and Transgender Transition treatments.

This series is merely a starting point highlighting how Lesbians have been robbed, ruined and downtrodden by heterosexual women. It is shocking and frightening to realize when all that has been said and all the has been done, and all that continues to be said and done, the worst enemy to lesbians, has always been and remains STRAIGHT (bians) women.

Lesbian is its own NORMAL and both Mrs Dirt and I will die making sure EVERY dyke gets the chance to realize it.