LESBIAN-NO ONE is with Her 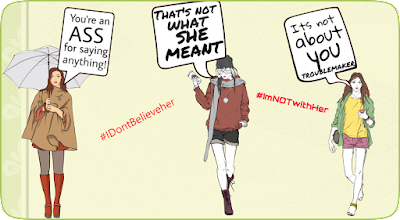 I would one day like to say this experience is bizarre, but in all my nearly 50 years as a dyke it is as common as the sky is blue. What is this all too common experience? The experience of Lesbians being disbelieved, called in question or outright attacked for pointing out any form of Lezbophobia to STRAIGHT women (in particular to RadFems/Academics/Feminists etc).

A gay man mentions someone said or did something homophobic toward/around him and he's believed without question. A black person declares someone was racist and its BLACK LIVES MATTERS from all four of the Earth's corners. A STRAIGHT woman, regardless of credibility says a man was sexist/misogynistic toward her and its SISTERS of the world unite. A Jewish person points out anti-semitism and its a roar of  fuck off you fucking nazis!

Apparently Lesbians who:
No, WE, those Lesbians, are not believed!

So no one is lost, this post  is what I am referring to, but that post is a speck in the shear totality of the LEZBOPHOBIA and LEZBOPHOBIC its-all-in-your-little-lezziefied-minds that dykes deal with on an ongoing daily basis!

Lesbianism isnt a fucking identity one tries on for fun (unless you're truly sick/sicko) and for Lesbians it isnt something removable. This may be the 21st century, but calendar days that Nationally recognize homosexuals can be counted on one hand with several fingers removed.

Do we even have to wonder what would have ensued had this tweet said:


On this Chanukah Day I'm happy to announce identities come and go but your body wakes up with you every morning.

On this Martin Luther King Day I'm happy to announce identities come and go but your body wakes up with you every morning.

On this International Women's Day I'm happy to announce identities come and go but your body wakes up with you every morning.