This is the next in our series of posts exposing some of the numerous offenders who have posed as “Lesbian Experts” but who are neither lesbian nor expert. 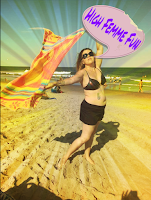 Today's subject is Shar Rednour. Rednour while in a long term OPEN relationship with one STRAIGHTBIAN lover gives the misleading impression that Rednour is a Lesbian, her heterosexually charged writings/interests/films etc are not only antithetical to actual Lesbians, they are detrimental and filled with Lesbian misinformation.

Shar Rednour is yet another person who is widely viewed as a lesbian sexpert. The following is from her Amazon bio:

"Shar wrote the empowering, hilarious whole-life anthem for Femmes of most ages and all genders: The Femme’s Guide to the Universe, nominated for a Lambda Literary Award…Shar Rednour worked at the original On Our Backs Magazine/Fatale Media both as an editor/writer and in video production. In 1998 she co-founded her own production company with her wife Jackie. Their explicit sex education films were best-selling and critically acclaimed and include the cult classic Bend Over Boyfriend."

A). A Femme is a lesbian and therefore a female; thus the words for Femmes of all genders is a whole truckload of poppycock, baloney, malarkey, and plain old bullshit!

B). All of our offenders are intricately interconnected; our readers will recall Susie Bright‘s involvement with On Our Backs.

C). Shar’s wife, Jackie, has now apparently been sucked into the quicksand of the partners of Straightbians everywhere: the trans trend. Jackie now calls herself Jack and describes herself as:   "They are a Trans-Butch singer/songwriter." (What she is is another confused STRAIGHTBIAN trying to be the Dyke lover her STRAIGHTBIAN wife demands she be)

So,why exactly, is Shar Rednour's writing and her message harmful to Lesbians?

Most importantly, by promoting herself as a lesbian sexpert, Rednour has a responsibility to the Lesbian community to provide accurate information about Lesbian lives and practices. But, instead, her bizarre portrayal of Lesbian is vapid, highly sexualized, promiscuous, shallow, manipulative, dramatic, and often just plain incorrect.

For example: How does Rednour define a Femme Lesbian in her book The Femme's Guide To The Universe? By dragging out the overused, incorrect, ridiculous, over-the-top stereotype that has led to much misunderstanding and trouble for REAL Femmes:

Shar, put the vodka and the Margaret Mitchell books down honey! Mark our words: If you see a woman calling herself a High Femme , Queer Femme, or copious adjectives before Femme, you can rest assured that you are dealing with a drama-queen Straightbian.

Moving on to Rednour's tales in her book of being a Femme Lesbian (and  Rednour states that she was taught the ropes by previous Straightbian offender Susie Bright):

"As the assistant editor at OOB (On Our Backs)I became close friends with photographer Phyllis Christopher and filmmaker Karen Everett. Their cameras documented our experiences in the gay ’90s. We fucked for the lens during the first days of women’s sex clubs...I could always make an extra buck there go-go dancing. Handsome, older butches were good for a free meal and experienced loving. As people came and went, lines between friends and lovers blurred into one big, lubed-up, experiment."

More erroneous and inaccurate assertions that Rednour makes in her book:


"A lot of femme dykes are bisexual."

Our answer to ALL of these assertions Miss O'Hara: Bullshit!

Again, Rednour purports to speak about/for Femme lesbians, but who she is actually speaking about/for is Straightbians. Femme lesbians are LESBIANS. No men involved. No men desired. No men, PERIOD.

Lesbians (no matter whether Femme, Butch, or any other type of Dyke) are females who are biologically oriented to Lesbians. It's not mysterious nor complicated.

So now that we know that Rednour misrepresents Femme in a variety of ways (way too many to list in this post), let's see what she has to say about Butches, starting with the title of her chapter on Butches:

Hmmm. Rednour is already shoveling the shit before the chapter even starts. Butches are not bigendered. Butches are female. Butches are lesbians. This is not rocket science.

Other BS about Butches and Butch/Femme relationships from Rednour:

"If she (Butch) has a femme on her arm, then she becomes a stud. It proves she has sex with pretty women."

"Good butches will treat you like a lady, which always helps to make you feel like a Queen."

"Some of my methods can be applied to eliminate bad habits that otherwise great butches have picked up...For example, my ultra-suave wife had this annoying habit of handing me my ticket at the theater. Finally, I just let her drop it into thin air. She had to scramble around for the fallen ticket, and we backed up the line, thus embarrassing her, but she definitely got it that it was not for me to hold the tickets. Stud wife is to hand over both tickets while I smile politely at the ticket ripper. That’s my job."

And thats exactly what Rednour did with her woman, she trained her be her idea of a Butch lesbian. Shar's woman Jackie before Shar got a hold of her-clearly a girly girl: 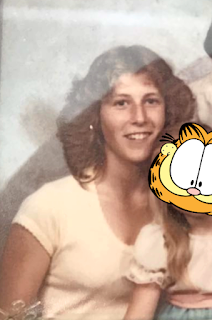 Jackie with Shar early on-Shar in the process of making her designer dyke by the addition of a backward baseball cap: 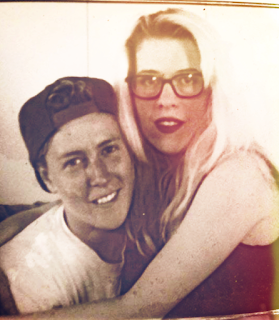 Shar stepping up Jackie's Butch transformation by moving her up to a STRAIGHTBIAN andro-dyke: 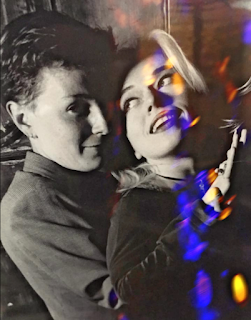 There are many things wrong with Rednour's hetero-interpretation  (Hetsplaining) of Butch and Butch/Femme relationships (as with other topics, there are too many things wrong to address in a single post), but to begin with, Butch/Femme relationships are not ridiculous approximations of male/female relationships. Femmes are perfectly capable of giving their own ticket at the movies, and Femmes take care of themselves and don't play bizarre and ridiculous games to humiliate and control their partner. Butches do not treat their partners as Stepford-wife showpiece arm-candy either, and Femmes would be insulted if they did. Finally, Butches are born, not made, so you cannot just find a random woman and turn her into a Butch as Rednour suggests. (Where you find this happening is in STRAIGHTBIAN/STRAIGHTBIAN relationships)

Rednour goes on to give advice regarding relationships with Lesbians who are transitioning:

"Many femmes date and/or mate guys who once identified as women or dykes or lesbian or butch or anything else they called themselves."

"...you have to realize they’re (your needs are) going to be secondary for a while, and that you really must be open to all of his communication when he is ready to communicate."

"Besides body changes, there are mood swings with adjusting hormones. A successful relationship depends on patience, openness and forgiveness."

Rednour's advice for Lesbians to support their Lesbian partners in transitioning is a sad, misguided, damaging variation of stand by your man. Rednour doesnt bother to warn partners of STRAIGHTBIANS who transition, that within the first year on testosterone, their once thought to be dyke partner will be having sex with men and women.

Since this post is already getting too long, although we have barely scratched the surface, we will conclude with Rednour's propaganda regarding Stone Butches. Here are a few choice quotes:

"'stone butch' refers to a butch whose gender presentation includes the most traditional characteristics of butch, including the one most talked about: the privates. They do not get touched. Most likely neither do their breasts."

"My sex with stone butches consisted of them doing me and that’s it. Some had orgasms while fucking me, but if not, they came on their own time."

"(Femmes should) stop feeling guilty or worried about the top’s pleasure. A good time and orgasms abound all because of you, my puddin’ pie."

If you really want to know the truth about "Stone Butch", read this post. Twisting language until it screams for mercy by referring to Butch sexuality in masculine terms and by telling partners  not to care whether their Butch is touched is harmful to Butches in many ways and detrimental to Lesbian intimacy period.

Once again, Rednour harms Lesbians with her STRAIGHTBIAN diatribes. 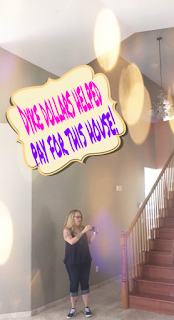 To be fair, Rednour does also offer some GOOD non-lesbian-related advice in her book, including recipes, cleaning tips, skincare tips, and self-defense tips. The best tip of all is to never get in the car with an assailant:

"Usually, if someone puts a gun to your gut and tells you to get in a car, he wants to do much worse things to you than simply shoot you or assault you. Your best odds of survival are to make a stink right then and there even if you get shot or hurt."

If Rednour would stick to this sort of general all-purpose advice, all would be well, but when she markets her lesbian-related advice as an official guide, that's where we run into issues.

Sadly, Rednour, like our other offenders in this series, promotes and disseminates incorrect and harmful information to and about lesbians which furthers true lesbians' invisibility and misconceptions both within the Lesbian community and with the public at large. Shar Rednour is warped self centered STRAIGHTBIAN and a danger and menace to Dykes everywhere.