This post introduces the last 4 offenders of the "Dirty Dozen" in our Unstraightening Lesbian series to expose 12 of the numerous purported "Lesbian Experts" who are neither lesbian nor expert. Each of our "Dirty Dozen" has done immeasurable damage to actual lesbians by propagating false and harmful information to, for, and about lesbians.

Without further ado, here is the latest (and last-for the moment) list of current culprits, along with a brief "teaser" to lead into our future more detailed posts on each: 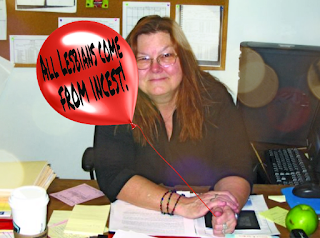 According to an article entitled "Dorothy Allison: Queering Autobiography, DiscussingSexuality, Reshaping Feminism" by Mélanie Grué, published in the The Appolonian: A Journal of Interdisciplinary Studies, Grué notes the following regarding Allison:


"She (Dorothy Allison) does not shy from connecting incest with lesbian  sexuality or breaking the link between victimization and innocence, when she tells about how her sexual identity developed on the base of violence."

Childhood sexual abuse is not related to lesbian sexual orientation, but it is often found along with Straightbians like Dorothy Allison.

In Allison's work "A Question of Class" from her book Skin: Talking About Sex, Class and Literature, Allison states that her


"sexual promiscuity, butch/femme orientation, and exploration of sadomasochistic sex became part of what was driving [her] out of [her] community of choice"

Allison goes on in this essay to define herself as:


"a transgressive lesbian—femme, masochistic, [sexually] aggressive . . . and as pornographic in [her] imagination and sexual activities as the heterosexual hegemony has ever believed"

Like our other offenders in this series, Allison's inaccurate and oversexualized conceptualization of lesbian as well as her incorrect portrayal of Butch/Femme are examples of how damaged Straightbian assertions have twisted lesbian into something unrecognizable to actual Lesbians.

Loree Cook-Daniels has been mentioned previously in the post "Straightbians You May Know": 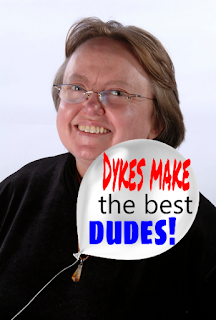 Loree is the epitome of the most dangerous Straightbians of all. Unhappy with hetero-domesticity, Loree hitched a ride on the radical feminist bandwagon where she made the choice to call herself a lesbian.

She partnered with an insecure dyke whom she pressured/supported right into transitioning. Her partner, Marcelle, could not adjust to transition and later committed suicide.

Loree's work continues to focus on transgender people and issues, and she lies to herself and others by saying falsehoods such as:


"many (lesbian) partners discover they actually have a preference for FTMs".

Pratt is probably known as much for her disjointed thinking/writing as for whom she was partnered/married (Leslie Feinberg). Self described per her Twitter account as:

Before discovering Women's Lib Pratt was married with children, after Women's Lib she leaped joyfully into free love with other straight women pretending to be lesbians.


"As I say somewhere, one definition of a lesbian is a woman who has a job." 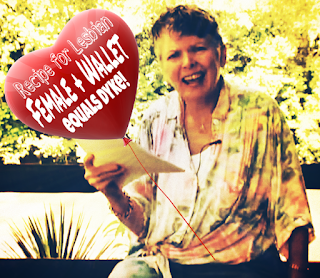 Rather than by-products of birth, through Women's Lib Pratt came to believe her heterosexuality, like her femininity could simply be unlearned. Were that true, even in the slightest, Pratt's heterocentric behaviour/lens werent unlearned enough. Pratt co-opted Femme in the same way she co-opted Lesbian, in the same way she heterosexualized her relationships with lesbian lovers. Pratt climbed lesbians like ladder rungs, with each step up hoping to create the perfect man.

In the end, Pratt got neither, man nor perfection.

Schulman is an acclaimed novelist who is also purportedly a lesbian activist. But when her work is examined, much of it is decidedly UN-lesbian. 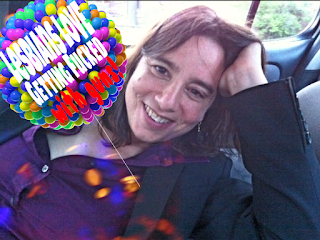 Let's take her X-Rated writing for the film Mommy Is Coming:  (Yes, you read that right, but read it again if you like getting grossed out: MOMMY. IS. COMING. Ewwww.). The following is an excerpt from Julia Bryan-Wilson's review:

"Mommy Is Coming (2012), which was cowritten with novelist Sarah Schulman and premiered in Berlin this February, Dunye looks again at queer sexuality, presenting it in its most flamboyant registers. An international cast drawn from loosely defined queer and gender-deviant creative communities is here conscripted into a meditation on the tropes and cliches of pornography. The film involves many explicit sex scenes, strung together with only the thinnest of narrative tissue: Within the first few minutes, a woman gets fucked with a pistol in the back of a cab in broad daylight."

We hope it is already obvious why these 4 have been included in our "Dirty Dozen" list. The above information is just a fraction of the flapdoodle that these 4 have perpetrated over the years. The reasons they each are included in the "Dirty Dozen" will become increasingly clear when we elaborate on each in our upcoming posts.