This is another joint post: another in our series dismantling some of the baffling array of Lesbian Experts who are neither lesbian nor expert. 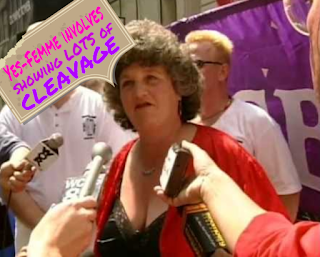 Today's charlatan is Joan Nestle. There is so much to say about Nestle that it is difficult to know where to start, so we will start with the lead-in from our teaser post.

Nestle is one of the most dangerous of our offenders, because of the widespread recognition she has received (and continues to receive) as a and worse a Lesbian Archivist.

Let’s start with the fact that Nestle was the editor of the hideous lesbian anthology, The Persistent Desire, in which so much misinformation was crammed into one book that if you open it randomly to any page, cover your eyes, and point, there is a 99.526746538% chance that the paragraph your finger falls upon is complete and utter foolishness.

Let’s also note that Nestle has a voluminous resume of lesbian publications and speaking engagements and is widely regarded as a lesbian expert who is an award-winning author of lesbian literature, both fiction and nonfiction. She is the co-founder of the Lesbian Herstory Archives.

Despite being highly lauded by multitudes as a lesbian expert, let’s examine a few Joan Nestle quotes, all taken from The Persistent Desire:

“The first adult person I loved and lusted after was a gay man” (pg. 256)
“in graduate school, I even had a man as a mistress. I never let him fuck me, but I jerked him off, I went down on him, I did everything to play with this thing called a penis” (pg. 257)
“I was dating a tough guy, Denny…Denny felt me up in the movies and gave me huge hickeys…It was so clear to me that there was a way to be sexual and I had to find it. All this has to do with how I came to my femmeness.” (pg. 260)
“The first time I slept with a man, he masturbated me and I came.” (pg. 260)
“I was more attracted to men who were smooth operators.  They excited me.” (pg. 260)


What is obvious from these quotes is that Nestle is physically attracted to males, and, by her own admission, actively sought out and enjoyed sexual contact with males. THIS is NOT LESBIAN. (Even though later-in-life lesbians often have had previous relationships with men, they universally report that they were never truly attracted to them).

Furthermore: why, oh why, OH WHY, when Nestle was supposed to be discussing her alleged
lesbianism, does she choose to incessantly talk about her sexual experiences with MEN and attraction for MEN??

We'll tell you why: She's not a lesbian, that's why! Delving further into Nestle's bizarre and offensive book, The Persistent Desire, it is not difficult to uncover even more lesbian misinformation and downright nonsense.

In fact, let's start with the Introduction written by Nestle, which describes Femmes and Butches, respectively, as "Flamboyance and Fortitude".  While this may sound catchy, it is incorrect, and more importantly, it reinforces the tired, erroneous stereotypes about Butch/Femme that continue to plague us now.

Let's get one thing straight: True Femmes are NOT "High Femmes" or "Queer Femmes" and most are NOT flamboyant. In fact, if anyone describes herself with those or similar dramatic attributes, you can be quite certain that you are dealing with a Straightbian.

Femmes are not helpless little shrinking violets. Femmes do not exist to show off and seduce and preen and simper. Femmes do not exist in fear of smearing lipstick or breaking a nail. Femmes have just as much fortitude as Butches or any other kind of Lesbian, and sometimes have to demonstrate even more fortitude in our everyday lives, because Femmes also have to deal with unwanted sexual attention from males.

Put that in your pipe and smoke it, Joan Nestle.

As more proof that Nestle doesn't have a clue about what being a Femme means, here's another quote from her infamous book The Persistent Desire, which was published when Nestle was 52: 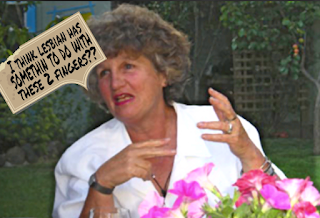 Femme lesbians are Femme lesbians from birth to death.. Women do NOT just "magically become" a Femme lesbian (or ANY kind of lesbian!) as an adult.  The fact that Nestle thinks this is possible, and promotes this idiotic idea in her book, is even more proof that she is not a Femme lesbian, and not a lesbian of any sort period!

In this chapter, entitled "The Femme Question", Nestle goes on to discuss many of the problems and misconceptions about Femmes both within the lesbian community and in general society.

While we agree that there are numerous inaccurate and widespread fallacies about Femmes, we assert that Nestle herself and Amber Hollibaugh and Shar Rednour and the numerous others who have falsely portrayed Femme have all personally and directly contributed to the very same phenomenon of Femme Invisibility and misinterpretations of Femme that is being discussed by Nestle in this chapter. Where's Alanis Morissette when you need her!

Moving on to our next point, Nestle wistfully writes of a sexual interlude with former female lover, Esther at the end of the Introduction section of The Persistent Desire.

Nestle also wrote a detailed story entitled Esther's Story about her sexual encounter with Esther (Esther obviously made QUITE the impression) in her book, A Restricted Country.

Esther makes yet another reappearance in Nestle's writing in a lecture/essay entitled On Rereading Esther's Story. This time, Nestle isn't envisioning Esther as the woman she actually was; instead, without input/permission from Esther herself, Nestle decided to reimagine Esther as transgender; to cast her as a wanna-be-man rather than the lesbian she was. All suggesting in typical STRAIGHTBIAN fashion, Nestle imagining Esther or any other lesbian lover as a man.

Noteworthy to this reimagining is that Nestle had been invited to speak to a trans(male) gender group, and this is the warped trans-slanted revisionist garbage that she vomited in effort to appease men who are also claiming to be lesbians.

We would say Nestle sold out, but the sad truth is she wasn't ever genuine enough to begin with to be able sell out!

Let's examine a quote from this lecture/essay in which Nestle recasts her female lover, Esther, as transgender:


"But when I reread the story keeping in mind what I had and had not allowed myself to say about Esther’s sense of self and gender, I saw clearly (and indeed, I knew this at the time I wrote the story) that I was being simplistic in my description of Esther’s desires. I was trying to serve two histories at once. I knew that if I had written 'Esther wanted to be a man', the story would have been dismissed and so would Esther and all I wanted for her in the new world of the 1980s. This balancing act led me to cast Esther’s 'maleness' in a more womanly way."

Several issues jump out at this passage:

1). It should go without saying that Nestle has no right to speak for Esther. To reimagine someone else's identity publicly is reprehensible. Esther, and only Esther, should speak for her own sense of self, and based on Nestle's own previous stories about Esther, Esther considered herself a lesbian. This is a pathetic attempt to trans-wash history!

2). Esther was not a man, and it is very Straightbian of Nestle to recast her as such.
Real lesbians, unlike Nestle, love our lovers' femaleness. Females loving females is the very definition of LESBIAN, in case it has become unclear with all the bullshit being shoveled by Nestle and her cohorts. Real lesbians do NOT want to, nor do we need to, recast our lovers as male.

3). The invitation to give this lecture came about due to Nestle allowing a transgender MALE (MtF) to work with her on the Lesbian Herstory Archives. The fact that Nestle refers to this person as a woman in her essay shows that Nestle has chugged the trans KoolAid and has the reasoning skills of mayonnaise.

4). It's obvious that Nestle, being an opportunist, sensed the change in the social and political climate following the dreaded and dreadful Queer Theory: Lesbian became increasingly unfashionable while the transgender trend gained steam. Nestle knew her future meal ticket lay in metaphorically sucking the dicks of the dickless, least we mention her own natural inclinations.

In summary, Joan Nestle, like all of our Dirty Dozen in this series, is NOT A LESBIAN, and she is certainly NOT AN EXPERT on Lesbian lives, Lesbian history or Lesbian desire.

Nestle's deluded imaginings of lesbian have seeped into the public's consciousness like hazardous waste into groundwater, and the effects on real lesbians is just as insiduous and toxic.