Amber Hollibaugh has been a well-known figure for many years, primarily known and often quoted as a "Lesbian Expert", although, as we will demonstrate in this post, she is neither lesbian nor expert. 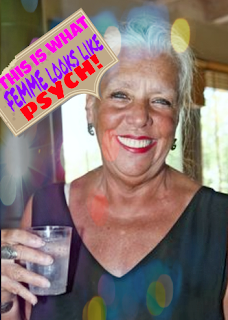 Hollibaugh has published books/articles, participated in many lectures/conversations/interviews, has been revered by many as an expert on lesbian matters, and has even been included in Smith College's Voices In Feminism Oral History Project.
According to her publisher, Duke University Press:

"Amber L. Hollibaugh is a lesbian sex radical, ex-hooker, incest survivor, gypsy child, poor-white-trash, high femme dyke...She explores the concept of labeling and the associated issues of categories such as butch or femme, transgender, bisexual, top or bottom, drag queen, b-girl, or drag king...Having informed many of the debates that have become central to gay and lesbian activism, Hollibaugh’s work challenges her readers..."

Hollibaugh's work "challenges" us for sure, but not in the way this blurb intends.  Her work challenges us to call it out for what it is: Bullshit.
We previewed a couple of the quotes from Hollibaugh's Smith College interview in our recent overview post, and let's review them here again, briefly, to lead into this post:
Here Hollibaugh talks about trying to find a female partner since she decided to call herself a
lesbian and to this statement, we have to say: "Huh?":

Here Hollibaugh talks about dating men (which is not very lesbian of her, now is it?):

Here Hollibaugh discusses her work as a prostitute while also calling herself a lesbian:

"...it is confusing when you are hooker, because you are doing it for work, and so you don’t know whether you would— how that’s affecting you— whether women look good because they aren’t men, or whether you are actually independently attracted to women. Uh, and I wasn’t quite sure how I thought about it. I wasn’t prepared to stop fucking men, I actually never had trouble having sex with men." (pg.59)


It should already be quite obvious just from these 3 quotes alone that Hollibaugh is a troubled Straightbian attention-seeker using lesbian for her own self-promoting purposes, but since numerous people have persisted in their ridiculous belief that she is a lesbian expert
for decades, we felt we needed to spell it out more clearly in this post.
Hollibaugh's own version of her life story, as told in the Smith College interview is rambling, often confusing, sometimes evasive, and frequently contradictory. Some of her outrageous stories and claims are, quite frankly, simply downright unbelievable.
But regardless of whether her outlandish stories have even a grain of truth to them, it is obvious from her own words that she is not a lesbian.  Here are just a few of the statements, in Hollibaugh's own words, that no true lesbian would ever think or say:

1). (About being with men): "It wasn’t that I hadn’t tried to love men, it wasn’t that I never loved them, it wasn’t that I didn’t get off on having sex with them" (pg. 72)
2). (About working as a prostitute): "I have to say, it was not a bad living." (pg. 56)
3). (About one of her most significant relationships with a woman):  "it was one of the most important relationships I’ve ever had in my life, though the sex was terrible, and we almost never made love." (pg. 71)
4). (About her experience AFTER "" while living in a radical commune): "Like, when Laurel and I broke up, I went back to Berkeley...I ended up pregnant and I didn’t know what to do... If you were an independent woman, if you were a lesbian, if you — you were not probably going to do too well. And I felt, at least for many years, like I wanted what those men knew, and I was trying to learn everything...I did not want to be simply somebody’s girlfriend and I knew that the way I was treated was that those men did not think of me as a significant intellectual. I didn’t think of myself as an intellectual but I was hungry. And I knew that they had ideas and I knew in exchange for sex, I could get close to them and learn things from them even though they weren’t going to try to — they were going to take me serious intellectually but they — you know, you were in a world surrounded by men."    (pgs. 85-95) 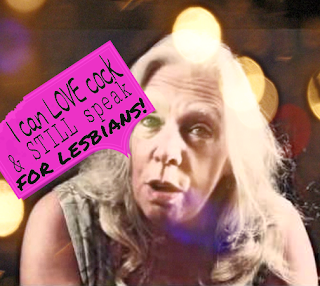 Let's examine these few statements before moving on:
Statement #1: Hollibaugh admits that she loved men and enjoyed sex with men and had no problem reaching orgasm with men.  Hmmm...NOT LESBIAN.
Statement #2: Hollibaugh stated that she was not desperate for work when she decided to become a prostitute; she says in the surrounding text that she saw it as a money-making opportunity and willing entered into sex work. According to Hollibaugh herself, having sex with male strangers for money, is "not bad".  (She only quit because she states that she was intruding on the territory of a sex trade boss, which resulted in one of her tales which stretches the boundaries of credibility).  Hmmm...NOT LESBIAN.
Statement #3: Hollibaugh here notes that in one of her "most important" relationships with a female, their sex life was both terrible and infrequent.  Why??  Because she is not a lesbian (and from the surrounding description, it actually sounds as if NEITHER of them are lesbian); therefore, they mistook friendship and caring for each other as "love", but they had no chemistry because of the lack of lesbian sexual orientation.  Hmmm...NOT LESBIAN.
Statement #4: Hollibaugh breaks up with her female lover after raising Hell claiming to be a
lesbian, and moves to Berkeley and joins a radical commune, where even more fantastical and nonsensical tales allegedly happened, but the only part we are concerned about is the part where Hollibaugh admits she had consensual sex with multiple men in order to gain knowledge. (Apparently Hollibaugh is unfamiliar with the more traditional methods of gaining knowledge, such as visiting a library). The main factor for us here is: Hmmm...NOT LESBIAN.
These are only a very small sampling of the multitude of non-lesbian comments in the Smith interview alone; but this small sample abundantly illustrates Hollibaugh's true nature: heterosexual, dramatic, opportunistic, manipulative, vague, and quite possibly prone to prevarication.
The following quotes about Hollibaugh come from an article entitled "Outsider Chic Amber Hollibaugh's Life of Contradictions and Dangerous Desires", published in the Chicago Tribune in January 2001, written by Nancy Traver:

(Quoting Hollibaugh) " 'I slept with men on the Left just to overhear their conversations about Marx and the foundations of capital,' she (Hollibaugh) writes in her book. 'Sex was my tuition, and I paid it willingly.' "
"'Sex work itself was not as hard as dealing with the attitudes surrounding it', Hollibaugh says."
"Her life has had more dizzying twists and turns than the two-lane roadway that leads up Pike's Peak. Indeed, following her life story could produce a bad case of whiplash. Hollibaugh's new book, My Dangerous Desires: A Queer Girl Dreaming Her Way Home (Duke University Press, $17.95), is her way of explaining all the contradictions in her life."

Again, this article and review of Hollibaugh's book only reinforces what we already covered above: Hollibaugh has had a complicated, contradictory, and highly dramatic life, which includes repeated consensual sex with men.
Anybody with any critical thinking skills (or the brain the size of a pea) whatsoever should be able to see that Hollibaugh is decidedly  NOT A LESBIAN.
In the horrible book The Persistent Desire, Hollibaugh participates in a discussion entitled: "What We're Rolling Around In Bed With: Sexual Silences In Feminism". Hollibaugh treats the readers to her expert opinions on Butch/Femme lovemaking. Here are a few Hollibaugh quotes from that chapter:

"I think the reason that butch-femme stuff got hidden within lesbian-feminism is because people are profoundly afraid of questions of power in bed." (pg. 246)
"It's hard to talk about giving up power without it sounding passive. I am willing to give myself over...I may not be doing something active with my body, but more eroticizing her need..." (pg. 246)
(When Hollibaugh is asked whether she ever wants to be active in sex rather than passively receiving):  "Well, not exactly in the same way, because with butches you have to respect their sexual identity...that's why roles are so significant..." (pg. 248)
"I was ruthless with men, sexually..." (pg. 249)

To analyze: Hollibaugh's quotes from the chapter above show us that, in true heterosexual-privileged Straightbian fashion, she prefers the "pillow princess" passive role during sex, preferring that a Butch lover do all the work while she doesn't reciprocate.
Hollibaugh's attitude is not only indicative of her own straight orientation, but, in this case more importantly, this mindset is also promoting the Stone Butch fallacy that is harmful to Butch lesbians.
Also: Hollibaugh is just plain wrong about Butch/Femme in general, as we have discussed many times in various posts, Butch/Femme is NOT about "role-playing".
Finally, once again, Hollibaugh cannot even make it through ONE article, interview, or discussion without talking about sex with men.  The implication of that should be obvious, huh??
In summary:
Is Amber Hollibaugh wounded? Yes.
Exciting? Check.
Theatrical? For sure.
Attention-seeking?  Most Definitely!
Opportunistic?  Good God, YES.
Lesbian? OH HELL NO!
People wonder why we care about who says they are lesbian and whether they are really lesbian. People say it's not our business to care.

What we say to those people is that it is the overt misrepresentation of lesbian lives by people like Hollibaugh and all of the other false "lesbian experts" which has led to numerous troubles for real lesbians, including, but not limited to: confusion; isolation; invisibility; misunderstandings within the lesbian community and with the general public; heartbreak for lesbians by being falsely led to believe by Straightbians that any woman can be a lesbian; criticism from other so-called "experts" who are not smart enough to see that the women perpetrating these lies are not actually lesbians; and in some tragic cases, lesbian partners have even transitioned in the mistaken and impossible hope of "becoming the man" that they feel their Straightbian lovers want.
Real lesbian lives are harmed by fake lesbians' lies.  We will never stop caring about that, and we will never stop speaking out against it. It is time for the lies to stop.
Dirt and Mrs. Dirt
Posted by dirt at August 29, 2016