As our readers know, we have been doing a series of posts exposing some of the numerous offenders who have posed as "Lesbian Experts" but who are neither lesbian nor expert.

So far, we have covered: Susie Bright, Pat/rick Califia, Rachel Pepper, and JoAnn Loulan.
Our next group of wrongdoers share similarities with our first batch.  The main similarity they all share is the fact that each of them is guilty of widely broadcasting false information about lesbians while widely promoting themselves as having "expertise" regarding lesbian lives.

All of our perpetrators have all also profited from incorrectly speaking for and about real lesbians, gaining both money and fame by promoting their fabrications about lesbian lives.

Below, we will give a brief preview of why these individuals made our list of the infamous, and, as before, we will then follow-up with separate posts on each.

Without further ado, and in no particular order of offensiveness, here are the next 4 culprits of our "Dirty Dozen": 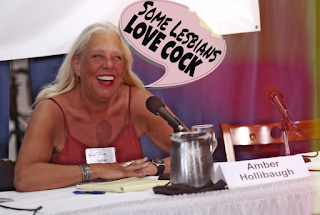 Hollibaugh has been a well-known figure for many years, primarily known and quoted as a "Lesbian Expert", although, as we will demonstrate in our future post, she is neither.

Hollibaugh has published books/articles, participated in many lectures/conversations/interviews, has been revered by many as an "expert" on lesbian matters, and has even been included in Smith College's Voices In Feminism Oral History Project.

According to her publisher, Duke University Press:


"Amber L. Hollibaugh is a lesbian sex radical, ex-hooker, incest survivor, gypsy child, poor-white-trash, high femme dyke...She explores the concept of labeling and the associated issues of categories such as butch or femme, transgender, bisexual, top or bottom, drag queen, b-girl, or drag king...Having informed many of the debates that have become central to gay and lesbian activism, Hollibaugh’s work challenges her readers..."

As an initial teaser to preview our more substantial post on Hollibaugh, let's look at just a few quotes from Hollibaugh herself:

This quote is from her Smith College interview, talking about looking for a female partner since she decided to call herself a ":  (Our comment to this quote: Huh??):

And another quote from the Smith College interview, talking about dating men (which is not very "" of her, now is it?):

One last teaser quote from Hollibaugh in the same Smith College interview, this time discussing her work as a prostitute while also calling herself a "":


"...it is confusing when you are hooker, because you are doing it for work, and so you don’t know whether you would— how that’s affecting you— whether women look good because they aren’t men, or whether you are actually independently attracted to women. Uh, and I wasn’t quite sure how I thought about it. I wasn’t prepared to stop fucking men, I actually never had trouble having sex with men." (pg.59)

It seems pretty clear that Hollibaugh isn't a lesbian from these few quotes alone, but her true warped, confused, attention-seeking Straightbian nature will become increasingly clear in our future separate post on her. 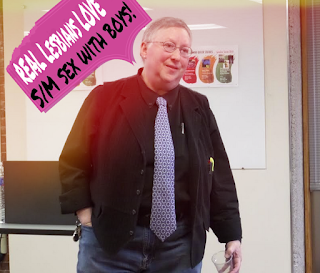 Rubin is hailed as "a pioneering theorist and activist in feminist, lesbian and gay, queer, and sexuality studies since the 1970s" (in the Amazon promo for her book, Deviations).

As just one teaser quote to lead into our upcoming post on Rubin, we will leave you with just this on statement regarding pedophilia (!!!) that should make any sane and thinking person's hair stand up on the back of her neck:


"Youth Liberation has argued for some time that young people should have the right to have sex as well as not to have it, and with whom they choose. The statutory structure of the sex laws has been identified as oppressive and insulting to young people. A range of sexual activities are legally defined as molestation, regardless of the quality of the relationship or the amount of consent involved. ...

The recent career of boy-love in the public mind should serve as an alert that the self-interests of the feminist and gay movements are linked to simple justice for stigmatized sexual minorities. ... We must not reject all sexual contact between adults and young people as inherently oppressive." 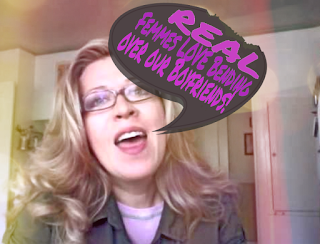 Shar Rednour is yet another person who is widely viewed as a "".  The following is from her Amazon bio:


"Shar wrote the empowering, hilarious whole-life anthem for Femmes of most ages and all genders: The Femme’s Guide to the Universe, nominated for a Lambda Literary Award...Shar Rednour worked at the original On Our Backs Magazine/Fatale Media both as an editor/writer and in video production. In 1998 she co-founded her own production company with her wife Jackie. Their explicit sex education films were best-selling and critically acclaimed and include the cult classic Bend Over Boyfriend."

A).  A true Femme is a lesbian and therefore a female; thus the words "for Femmes of most ages and all genders" is a whole truckload of poppycock baloney bullshit malarkey.

B).  All of our offenders are intricately interconnected; our readers will recall Susie Bright's involvement with On Our Backs.

C).  Shar's wife, Jackie, has now apparently been sucked into the quicksand of Straightbian's partners everywhere: the trans trend. Jack, as she now calls herself, currently describes herself as follows on her website: "They are a Trans-Butch singer/songwriter."

As with our other offenders, the above information is almost all you need to know about Shar Rednour, but we will continue the exploration of her harmful messages in our follow-up post about her. 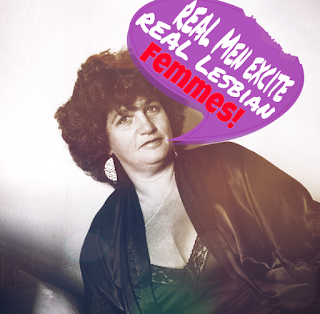 Ah, Joan.  Where shall we start with you?  So much to say, so little space!

Let's start with the fact that Nestle was the editor of the hideous anthology, The Persistent Desire, in which so much misinformation was crammed into one book that if you open it randomly to any page, cover your eyes, and randomly point, there is a 99.526746538% chance that the paragraph your finger falls upon is complete and utter foolishness.

Let's also note that Nestle has a voluminous resume of publications and speaking engagements and is widely regarded as a "" who "is an award-winning author of literature, both fiction and nonfiction. She is the cofounder of the Herstory Archives."

Despite being highly lauded by multitudes as a "", let's examine a few Joan Nestle quotes, all taken from The Persistent Desire:


"The first adult person I loved and lusted after was a gay man" (pg. 256)
"in graduate school, I even had a man as a mistress. I never let him fuck me, but I jerked him off, I went down on him, I did everything to play with this thing called a penis" (pg. 257)


"I was dating a tough guy, Denny...Denny felt me up in the movies and gave me huge hickeys...It was so clear to me that there was a way to be sexual and I had to find it. All this has to do with how I came to my femmeness." (pg. 260)

What is obvious from these quotes is that Nestle is physically attracted to males, and, by her own admission, actively sought out and enjoyed sexual contact with males. This is NOT LESBIAN. (Even though later-in-life lesbians often have had previous relationships with men, they universally report that they were never truly attracted to them).

Although there is much more to say about Nestle, the above quotes are more than enough to reveal why she made our "Dirty Dozen" offender list.

The information above is just a very small sample of the huge amount of information that we found on this group of 4 offenders, proving that these women are neither nor

We will delve more deeply into each of these women in future posts.  Stay tuned...