This joint post is yet another in our series about so-called "Lesbian Experts" who are neither lesbian nor expert. 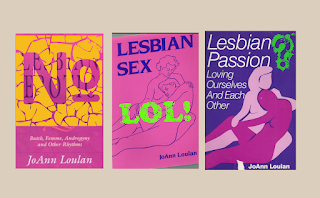 In addition, Loulan has served as a so-called "lesbian expert", while specifically calling herself a "lesbian", on numerous panels, in addition to making appearances on television shows, including Oprah, Phil Donahue, and others, to peddle her phony wares. 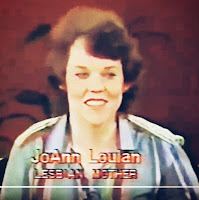 However, there is a huge issue with calling JoAnn Loulan a "lesbian expert":

JoAnn Loulan is straight.
Therefore, she is also, by definition, NOT an expert in lesbian matters.
After appropriating "lesbian" for her own purposes, misrepresenting lesbians, using lesbians, gaining fame from using the term "lesbian", and profiting from lesbians, JoAnn Loulan finally showed her true colors to the world by marrying a man.  (Or, rather, technically, we should say she married another man, because she had been married previously to a different man, before deciding to hijack Lesbian). 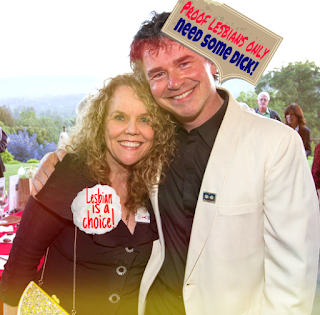 Loulan flippantly wrote off her responsibility to the lesbian community when confronted about her defaulting to her true Straightbian nature: "I'm proud of myself for telling the truth", she said...apparently too self-centered and myopic to realize that she has nothing to be proud of.  Her heterosexual "truth" is way too little and way too late.

JoAnn Loulan is much worse than the "sell-out" that she was accused of being at the time of her marriage to a man; rather, she is a shameless charlatan who seemingly does not even have the conscience to examine why what she has done to lesbians is wrong.

In fact, Loulan has not retracted her "lesbian" books despite her abandonment of lesbians; and she happily continues to list them on her website today.

As with our other offenders in this series, Loulan has published so very much erroneous drivel about lesbians that one post cannot possibly cover it all, so we will have to pick a few choice examples to illustrate Loulan's ignorance.

Let's start with Loulan's own story of her "coming out" deciding to use lesbians:


"As for myself, I am grateful that some lesbians like to bring straight women out...Many lesbians avoid bringing someone out -- in part for fear that she might go back to men..." (pp. 127-128).

Well, Loulan's own wording proves our point. Note that Loulan says "bring straight women out"; her subconscious is peeking through here, because the key word is STRAIGHT. (as in straight to the next dick!) Gee, we wonder why lesbians might worry that STRAIGHT women might go back to men?? Hmmmm...perhaps it is because they are STRAIGHT and that they WILL go back to men.

Thanks for proving our point for us, JoAnn Loulan! Very helpful!

On to the next example of Loulan's flapdoodle, this time regarding the question of what makes someone a lesbian:

Again, let's examine this carefully. Of course, Loulan would say that women "choose to be lesbians"...because, for her, it was indeed a (temporary) choice to pretend to be one. Also her breezy statement (Jimmy Stewart-inspired, no doubt) that "It's a wonderful lifestyle" is not only naive and incorrect, but also indicates copious amounts of straight privilege.

Being a lesbian is NOT a choice.  Being a lesbian is also NOT a "lifestyle", and it certainly isn't always a "wonderful" picnic in the park: sadly, even today, lesbians encounter discrimination, invisibility, oppression, misrepresentation, and violence.

Moving on to another example of Loulanesque truth-twisting and outright stupidity, this time with a quote involving Butches:


"Sue Golding discusses the range of butch sexuality. 'I think a lot of butches actually identify more with hermaphroditism.  They see themselves as being male and female...' " (pg. 126)

Even though Loulan is quoting another idiot (Golding), this quote is significant because Loulan saw fit to publish it. This one quote is so ludicrous that it almost would be laughable, except for the alarming foreshadowing of so many lesbians transitioning today.  We have Loulan and her pathetic cohorts to thank, at least in part, for destroying so many lesbian lives with such absurd notions as those voiced in this quote.


"Some lesbians believe that femmes would be with men, except for some fluke, and that femme lesbians are women who have been lovers with men at different stages of their sexual lives. There is also the belief that these women are likely to go back to men at some point, betraying the lesbian sisterhood." (pg. 86)

Sadly, Loulan is right about this incorrect perception of Femme lesbians. Femme lesbians face widespread lack of acceptance and understanding from both within the lesbian community and in the general population.

But what Loulan fails to see, understand, and/or address is that obvious fact that she, JoAnn Loulan, and other lying poser Straightbians like her, have directly contributed to the misrepresentation and prejudice Femme lesbians face.

By perpetrating the outright deceit that she, JoAnn Loulan, herself is a Femme lesbian, many people, apparently blindly and unthinkingly, accepted her word about that.

So then when Loulan (predictably!!) goes back to men, because she NEVER was a Femme lesbian to begin with, Femme lesbians then are left to deal with the anger, suspicion, and confusion caused by a Straightbian.

Our next selected Loulan quote is along the same lines, indicating that Loulan is no more a lesbian than she is a wombat, and interestingly, ties into another offender in our current series, Pat/rick Califia:


"When Pat Califia circulated a survey within the lesbian community in San Francisco...there was a rumor that she was straight...I lecture to lesbians throughout the country, have been on television as an out lesbian, write articles and books in which I regularly talk about being a lesbian, and yet there is still a rumor that I am straight." (pg. 23)

Based on this quote and the surrounding sentences in this passage, Loulan obviously has her panties in a wad in this section, and seems determined to prove she is a "lesbian" by listing her appearances and publications.

Sorry to burst the delusional little bubble of Loulan and her accomplices, but writing books/articles and appearing on television and lecturing to real lesbians does not make you a lesbian, just as obtaining a Ph.D. and writing/lecturing about the strange sexual behaviors of a newly discovered marsupial does not make Dr. Andrew Baker a black-tailed antechinus.

The rumors about Loulan and Califia persisted because lesbian intuition and gaydar trumped their false claims.

In this book, Loulan uses many quotes gathered from her so-called "research" on the topic of lesbianism in general and Butch/Femme in particular. Of course, what she doesn't seem to realize is that the "research" is only as good as the "researcher", methodology, and subjects.

In Loulan's "research", questionnaires were distributed at various sites. These questionnaires measure only subjective self-report with absolutely no way to verify the accuracy of the subject's perceptions (or even whether some people completed the questionnaires with bizarre answers as a complete joke).

To further complicate matters, even the questions being asked were not based on any sort of valid or even objective criteria; for instance, Loulan asked respondents to rate themselves and their lovers on a 9-point "butch/femme scale".

Another unscientific question on this questionnaire asks subjects to rate themselves and their lovers as which of the following Goddesses: Artemis, Athena, Hestia, Hera, Demeter, Persephone, or Aphrodite. Because, well, apparently Loulan thought that Goddess information is certainly at the top of the hierarchy of lesbian concerns.

So, of course, all results should be taken with the proverbial grain of shit.

But since these results are considered to be integral in what Loulan is preaching about lesbianism, let's glance at a sample of the results:

2). According to Loulan on page 201, one-third of her sample "identified as either butch or femme". Butch/Femme are incredibly rare in the lesbian community, so this high percentage automatically raises a huge red flag that these self-reported results are inaccurate.

3). According to Loulan on page 202, "the constructs for a butch lesbian and a femme lesbian are different to the point of being almost as separate as two genders."  In case Loulan wasn't aware of this, Butch lesbians and Femme lesbians and ALL lesbians are female. We may express female differently but we are all female in every way.


"for three-fourths of the respondents, their ratings" (on the butch/femme scale) "changed according to different situations."

Sighing loudly.  Being Butch or Femme does not change according to an activity or what we are wearing, etc. If Loulan were a real Femme lesbian, or had she bothered to get to know real lesbians, she would have known this, and she would have realized her subjects were clueless as well. But since she is not, she blithely spreads misinformation.


"There is a good deal of speculation about what is a butch, femme or androgynous women. Many will say it is how she is built, how much she weighs. Some will say it has to do with how she walks or dresses. Still others believe that it has to do with an attitude in the world, and especially in lovemaking. When it comes to the sexual aspect of the discussion, there are pretty strong ideas that butches are aggressive and femmes are passive, while androgynous women believe in total equality."

Again, Loulan is reporting the results of her survey, but these results only show her subjects' deep ignorance and confusion about the topic, as well as Loulan's own inability to understand even the basics of lesbian culture in general and Butch/Femme dynamics specifically.

6). For a final example amongst hundreds of potential examples, once again Loulan demonstrates that both her "research" and her knowledge of lesbian culture and B/F dynamics is severely impaired as demonstrated by the following quotes:


"When I say that there are no differences in this survey between butch, femme, and androgynous women, I mean that:


The truth about these "results" can be easily summarized as follows:  Wrong, wrong, and wrong again. Loulan wouldn't know a Butch or a Femme if we slapped her in the face, which is tempting, and her subjects apparently are equally uninformed. 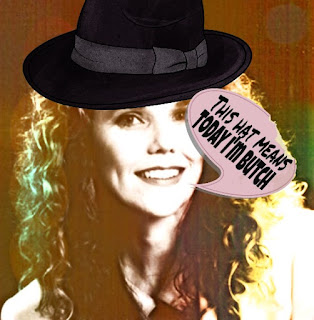 In summary, JoAnn Loulan, like our other offenders in this series, is neither a lesbian nor an expert in lesbian matters.  She has no right to speak to, for, or about lesbians. The only place her lesbian books belong is in the garbage, where they can truly fester like the putrid refuse that they are, and the garbage is where both our copies ended up!