In our recent post Unstraightening Lesbian: Removing the Heterosexual Lens, we discussed 4 (alleged) "Lesbian Experts" who are neither lesbian nor expert, and we gave teasers for each of our first 4 offenders. These posts will shine a spotlight on one of these offenders, and this one is particularly guilty.

Today's subject, Susie Bright, is single-handedly responsible for disseminating a plethora of misinformation to the public, as well as to lesbians ourselves. She has written and said sooo much ridiculousness that it will be difficult to confine this critique to a single post, but we will, because she does not deserve any more attention than she has already stolen from real lesbians. 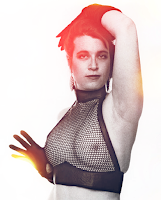 Susie is a self-proclaimed "lesbian sexpert" and, in fact, she wrote a book entitled "Susie Sexpert's Lesbian Sex World" (hereafter referred to as SSLSW), essentially a collection of essays which first appeared in various publications, which explains the book's unevenness and lack of apparent purpose (other than a format to brag about her sexual prowess/expertise and her blinding fabulousness, that is).

There's enough nonsense in this one book alone to write a dissertation about, so we will have to focus on the worst of the worst factual errors and egregious lies about lesbian life.

To begin with, the premise that Susie Bright is in any way a "lesbian expert" is a gargantuan fallacy, because she is not a lesbian.  She herself states on her website that she is "bisexual", and that she has lived with her male partner for approximately 25 years, in other words, she LOVES the cock.

However, this little factoid does not appear in SSLSW until the very latter chapters; prior to the very end of the book, she refers to herself and her activities as "lesbian" or "dyke", with no hint that she really LOVES dick until the very end.

Susie, who is, as we now know, a non-lesbian aka STRAIGHTBIAN, was also was a contributor (and editor-in-chief from 1984 until 1991) of On Our Backs (OOB) magazine, which proclaimed itself to be "Entertainment for the Adventurous Lesbian", and Susie now describes OOB as "an influential and remarkable part of lesbian, feminist, and publishing history". 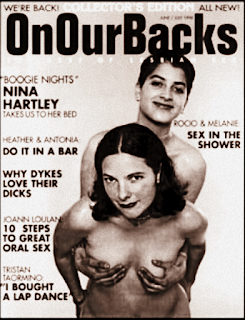 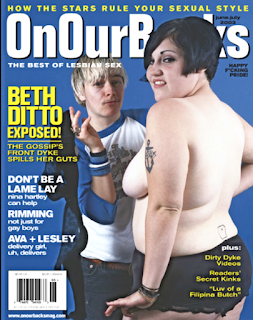 So, with the blurb of Susie's (non)qualifications as a "lesbian expert" covered, let's turn now to her infamous book, SSLSW, for (non)wisdom on the lesbian experience.  The following is just a very small sampling of the insanity, so we tried to pick out the most absurd for your reading (dis)pleasure.

In her chapter entitled "Pack It Up, I'll Take It", Susie (along with help from her buddy and fellow quack "Fanny Fatale",who will be featured in a later post), assert the following preposterous claims:

First of all, real Butches are incredibly rare and it is very likely that Susie has never even seen one. (Having short hair does not make someone Butch, although it makes millions of dykes falsely claim to be Butch). Secondly, no real Butch would ever "dress in feminine clothing" (for a turn-on or for any other reason); furthermore, a real Butch would literally die before she worked as a prostitute or a stripper. Sorry, Susie and Fanny, you batted zero there. 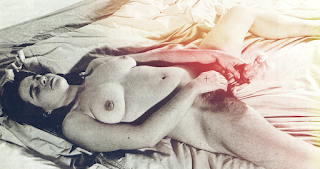 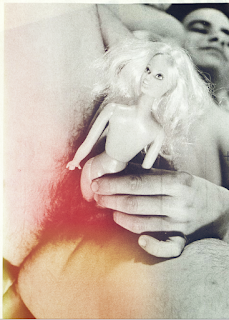 In the chapter entitled "Get Into The Group", Bright claims incorrectly:


"There is a whole generation of dykes who first made love to a woman as part of a ménage à trois with a man."

Perhaps the most offensive chapters (although it is admittedly a very close race!) in the book is entitled "How To Stuff a Wild Lesbian Bikini: A Survey of Lesbian Erotica" with a list of Susie's opinions of the best "lesbian" erotica. (The key word here is "lesbian", but as you will soon see, Susie's list is about as far from lesbian as it is possible to get).

Here is a small sampling of her vomitous, non-lesbian reading recommendations:

#10). There is an insurmountable problem with this example: Lesbians are female, and should never be referred to as "he": 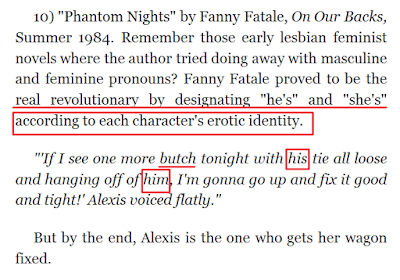 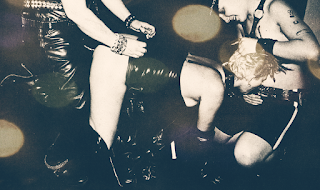 #11). There is a fatal flaw with #11: It was written by contributor to pedophile Paidika Journal Pat Califia.  Need we say more? 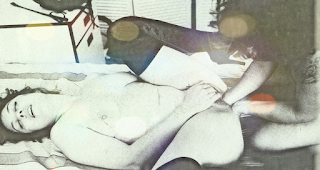 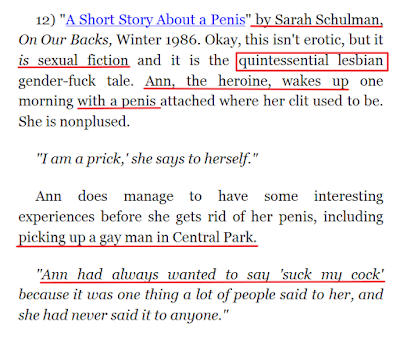 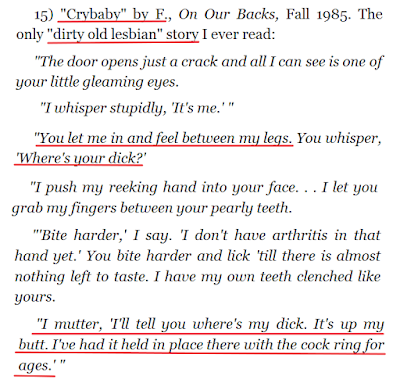 In the chapter entitled "Over The Dam", Susie talks about AIDS in the lesbian community.  While we agree with providing safe sex education, Susie's musings on the lesbian community in this chapter is not only cuckoo, it is the sort of fictitious fabrication that contributes to heterosexual men thinking that they have a snowball's chance in Hell of getting into a lesbian's bed. It also REEKS of a warped jealousy of true lesbians being (still) the lowest risk for HIV and lowest group who've contracted HIV which Susie tries to twist otherwise. The statement below also makes clear Susie does not view herself as a real lesbian since lesbians are "pure-as-the-driven-snow" and Susie is not.

This should go without saying, but sadly, Susie is forcing us to state the obvious: Lesbians do not have sex with men. 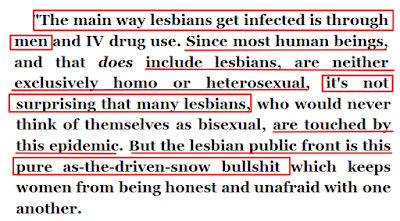 In summary, Susie Bright is not a lesbian and therefore has no right to speak for and about lesbians. She has repeatedly promoted outright falsehoods to and about lesbians.  She has made a fortune off of her nonsensical tales and she continues to make money off of us/LESBIANS to this day. 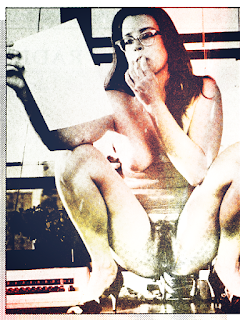 Susie, you're not as bright as you think you are. It's WAY past time to get off our backs!