Mrs. Dirt and I are writing another joint post, due to our mutual passions about the importance of the topic and our mutual experiences. Because of the potential to write an entire book on the subject (maybe later) we're going to do a series of posts in effort give a fuller focus on the subject and the women discussed. In this post we'll begin with a brief overview of the topic, followed by a list of a few of our topic's offenders, and under each offender we'll supply a teaser explaining while each woman is on our list. Each teaser will give the reader a taste of what is to come when we do a full post on each heterosexual culprit.

The subject Mrs. Dirt and I are tackling has affected decades upon decades of lesbians right into each and every lesbian alive today. As lesbians, we're all born and function as outlaws in a Heterosexual Society. As women, we have little power, and as lesbians we have less. Lesbians do not have male privilege nor the privilege gained from sleeping with/marrying men nor the privileges heterosexual women enjoy even when single. Even being a lesbian is not something we can simply choose not to be or in the case of the privileged straight women, choose not to DO. Lesbianism is NOT a set of behaviours, it is a birth right, or in our case, in current heterosexual society, we are viewed as a birth wrong.

That said, because lesbians do not have the power or the privileges to effect even the very notion of what a lesbian is or isn't, does or doesn't, Lesbianism itself has been defined/forged by STRAIGHTBIANS and other heterosexual women. Because Lesbianism has been filtered (watered down) through a heterosexual lens, lesbians ourselves have a false sense of who we are and where we come from.

What Mrs. Dirt and I are doing in this series of posts is focusing on the STRAIGHT female lesbian experts who have written/documented a pantyhose strained lesbian herstory and lesbian sexuality as defined by them-STRAIGHT women! We will show how Lesbian has been so tarred and feathered by these purported experts that lesbians ourselves recognized so little of our feelings and stories, many of us thought Is there something wrong with me or Am I a lesbian then?

These posts will shine a spotlight on how the experts  heterosexualized lesbianism, warped communities of lesbians, and has HEAVILY assisted in the astronomical number of lesbians transitioning. Nothing happens in a vacuum and by golly Mrs. Dirt and I are finally going to set some false records STRAIGHT!

While we certainly cannot address every inconsistency heterosexuals have attributed to lesbians/being a lesbian, we are going to address a few choice prime STRAIGHT female culprits in this post and in future posts whose books/lectures/high profiles/interviews etc have damaged generations of lesbians, beginning with how we saw ourselves and how heterosexual society has viewed us.

Before we get started with our first STRAIGHT culprit of Crimes Against Lesbians, let us preface by saying before the question "how do you know these women are straight?" is even asked, the answer lies (where it is not immediately obvious) in how their information is interpreted/disseminated. One thing both gays and lesbians have specific to us is a distinct language and a distinct way of communicating that language which has served as one of the few survival tools available to homosexuals, ensuring our survival AND ensuring we find each other. It may be subtle, but it is NOT heterosexual! Another reason is the INTENSE focus on the sexual, usually involving pedophilia play/BDSM.

Without further ado and in no particular order, here are our first batch of offenders:


“Why is everybody freaking out about it being a choice? It’s a great choice,” Loulan says. “I don’t know why the genetics argument is going to help us. It didn’t help blacks. I think it is a pathetic argument to say ‘I can’t help it.’ I don’t think it exists for everybody, and I don’t think it matters.”

Loulan, who clearly admits to not even believing in homosexuality at all was a leading lesbian voice for lesbians, to lesbians, about lesbians and to STRAIGHT society!

2) Rachel L. Pepper is a longtime editor for the lesbian magazine Curve (which by the way is rarely lesbian anymore) and a self-described "Blogger, award winning author, editor, and therapist". One of Pepper's early lesbian contributions money-makers was her book The Ultimate Guide to Pregnancy for Lesbians, and who better to tell lesbians how to make babies than a STRAIGHT woman! Pepper is a known STRAIGHTBIAN who supported her lesbian partner right into transition! And she is now using her LGBT expertise to make money by Pied Peppering gay and lesbian children into transition!

A very telling Pepper quote from her lesbian pregnancy book says it all:


"If you're like me and spent your teenage years trying not to get pregnant with your male partnerS..." pg 29 UGTPFL

3) Patrick Califia according to herself is an "author, therapist, sex radical, therapist, bear, pagan, top but not stupid" (She put therapist in twice, but she isn't stupid!). Pat Califia, prior to transition, claimed to be a Lesbian, a Butch lesbian, and a whole lotta other kinds of lesbian. She authored first Sapphistry: The Book of Lesbian Sexuality with a focus on Butch/Femme sexuality/BDSM as if the two were on a continuum, which, by the way, they most certainly are NOT! 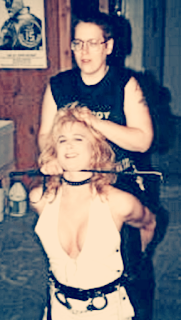 I can’t resist the call of that
Deep, smoldering anger,
the girlboy who can never forgive herself
Until Mama relents and says
(Standing in a dark doorway,
Spraying herself with a perfume atomizer),
“Forget the old man.
Come to my bed tonight.”

Her warped heterosexuality shines through her lesbian sex writings as well as her transgendered work, all culminating in an orgasm of pedophilic perversion.

4) Susie Bright aka Susie Sexpert is a STRAIGHTBIAN who has or tried to DICKtate her VERY damaged and warped and SICK heterosexualized version of dyke sex since the 1980s. Bright's copious lesbian stories, lesbian pictorials, lesbian advice, lesbian articles and lesbian interviews have not only confused and disgusted generations of dykes, Bright has been paid (and paid well) for occupying Lesbian spaces/presses when doing so. Bright is largely consumed with sex and telling anyone who will listen what "lesbians do in bed", which of course she as a STRAIGHTBIAN would not know! Due to the overwhelming amount of lesbian ignorance/misinformation Bright has supplied, we're hard pressed to leave you with just one teaser quote so here are the best:

"AIDS also inspired great dread among dykes because it exposed the fact that the majority of lesbians had had some intercourse with men since the epidemic started. In fact, lesbians at that time were more likely to have sex with "high risk men"-- ie, gay or bi men-- than exclusively straight women were."

"Not long after that story, we ran the first lesbian story about female to male transsexuality, and Loren Cameron and Justin Green posed for Honey Lee again. I had no idea what a huge story that would end up being...how many women would be inspired and touched by their words."


In summary, here is the first group of the Most Offensive. Those presented here today are the tip of the proverbial iceberg of so-called "lesbian experts" who are neither lesbian nor expert. Future posts will reveal others, and you are invited to submit your suggestions. We will do full posts on the fab four before moving on to the next group.

Until lesbians are willing to wake up and see that we are being led around by the nose hairs by people who do not have our best interests at heart, we will remain vulnerable. Identifying the factors, and the people, that have led us to this point is the first step to reclaiming what is rightfully ours. LESBIAN!