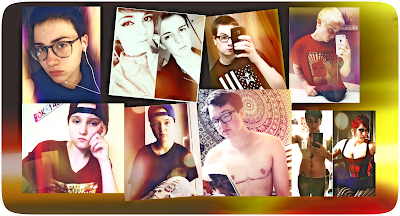 Mrs Dirt recently received this comment from a trans female who wanted to post here but wasnt sure which post was most appropriate. I'm posting her (Bartek's) comment in full here as it is oriented toward Trans Trenders: (I put in a few remarks in red)

At first, sorry for my English, I’m not a native speaker. If I sound rude – keep in mind it was not my intention.

I know this may be not a correct place to post this comment since it’s not related to comment policy, but honestly, I have no idea where I should write it. I just want to leave a feedback on yours and Dirt’s general work. I’m not sure if there’s a point of re-posting it on Dirt’s blog, I guess you two talk about what happen on your blogs? (We do!)

Anyway: I’m myself a FtM and (heh, it will sound like heresy, right?) recently I thought what you two were doing was really important. Don’t get me wrong, I have no regrets nor I deny the existence of transgenderism, so while I don’t agree with your basic statement, I still think you made some good points.

First of all I really appreciate Dirt’s posts about testosterone injection’s influence on female body. I regret most of the FtMs (trans females) will be to busy with sending hate messages to actually read theses posts.😛 Have you ever think of anonymously sending them rewritten in friendlier way to some transgender site? Most of trans-people perceive Dirt as their biggest enemy and don’t care what she has to say, but she’s saying things that doctors are unwilling to say. Of course, by this way you won’t change anyone view on transgenderism, but maybe some people WILL read it and be more cautious about their health. Honestly, some of the girls and boys on tumblr and other weird places talk about hormones as if they were candies with no side effects…

Also – I noticed the same things as you did. This is becoming a trend. A couple of weeks ago I talked with a girl, who claimed to be a pre-everything transboy. She told me she has started to be transgender (?) when she realized she’s in love with a gay. I wish it was an isolated case but 95% of the “trans” people I met seem to be completely mindless about what and why they are doing, fetishists or deeply damaged, self hating people.

There’s a short story I’d like to tell you, I think you’ll find it interesting. One popular trans activist in my country some time ago decided to detransition. She discovered she can truly enjoy her female self, found a love and stopped HRT. Probably in another order, though.😛 Anyway I felt happy for her and I thought everyone else will react the same but… no. The amount of hate she got was terrifying. If people could they would instantly burned her alive. She didn’t even started to be critical about transition in general, she just said she has chosen the wrong path and found the right one. I don’t know, why would anyone who is ‘mindful’ about what they are doing react so angrily?

Anyway I don’t agree with many of your opinions, but I think your voice should be heard and analyzed, not silenced by people who are trans, think they’re trans or just pretend to be.

I guess I should post it on Dirt’s blog after all, since she’s more focused on gender critical (did I use the correct term?) activity, but I noticed she really like to have her place well organized and is not found of off-topic comments. And as I said, this is really off-topic.😛

Have a nice day.