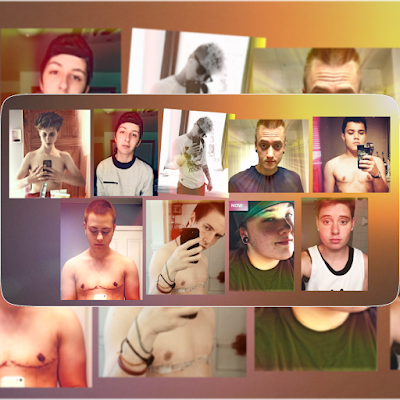 Gender Transition is a multi layered/multi step process involving drastic changes to appearance ranging from the superficial (clothes/hair) to the severe (medical drugs/surgeries). An early goal for those seeking transition is passing as opposite their sex. Initially this is simply matching visual markers of sex (hair cut/clothing/breast binding etc in the case of females) to their opposite sex.

The "success" of passing is heavily dependent upon reactions by the general public, such as for females, getting sired by a sales person or a cashier. Being sired is an early addictive Trans High which reinforces to the female in question that she REALLY is meant to be male. Examples:


So guys today I was at a cafe with family in my town and the waitress was talking to my sister and she says "so it must be hard for you to be the only girl in the family" and my sister just stares at me until I just went "yes yes she is" and that is the story of how I finally am able to pass in public!!!!

Twenty-three months on T and I've finally started to pass and/or communicate male regularly. Yay! I thought it would never happen.


Not passing when trying to pass is a low blow for those seeking to transition. Examples:

So tonight my drink never came with my dinner and I told my waitress I didn't want it anymore. She later showed up with the drink saying the bartender told her to just give it to her anyway. Her being me. So I gently and non confrontational asked her why she referred to me as her. She acted surprised. Then blamed the bartender who could not see me from where he was at. I'm tired of being quiet when I get misgendered.

It happens all the time when I have jobs at different stores. I will ask for the bathroom key and they hand me the girls and I always say no I need the men's and they act like I killed a kitten.

I get aggressively ma'amed which is weird and uncomfortable but even at work people won't call me the right things I'm getting so frustrated but I can't seem to get the strength to correct people.

Fortunately for those who do not pass, there's social media sites like Tumblr or Facebook groups. Females seeking transition use social media groups for support and to assure each other they do in fact pass. Many trans female sites/groups are full of trans females posting pictures of themselves to the group, asking if they pass. Even when glaringly obvious that they dont, despite the claims of male, their reactions toward each other is typically female. Words to a fellow trans female asking if she passes ranges from total assurance to supportive tips on how better to pass. Its a warped version of good old fashioned female etiquette do's and donts.

What goes ignored about passing is what is actually taking place, in both seeking to pass and passing itself. The disappointment and anger that occurs when not passing, isnt because transgenders arent being seen as their true self, but precisely because they ARE. The same is true when transgenders begin passing with regularity, the exhilaration is in no longer being seen, not in being seen as the someone else (opposite sex).

Another area of transgenderism, particularly trans females, that psychologists, therapists and Gender Special/ists have failed to see let alone understand.