Gender Dysphoria is a term/diagnosis professionals (wrongly) staggeringly over use to identify and unnecessarily treat transgenders and a term astronomically used by pedestrians to self diagnose. 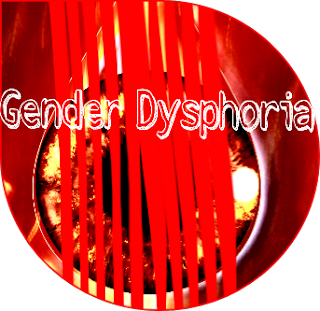 As someone who has suffered true Gender Dysphoria to the severest degree, developing puberty related discomfort around age 12, then drastically intensifying a year later, I will discuss Gender Dysphoria from various angles; a first person account, secondary, as an long term lesbian community member and thirdly as an experienced reader/writer on transgender related issues.

I'm told by age two I refused to wear dresses or any clothing that was over the top girly. I can recall at three years of age choosing clothes either uni sex girls or boys clothing, the same was across the board for toys/friends/games/play etc. I also recall specifically at age three that random adult strangers began to ask me "Are you a boy or a girl?". The question at first confused me, because it made no sense to me. I had long hair, so how couldnt they SEE I was a girl? Later this question or the flat out assumption that I was male, caused me a deep sense of shame. Not a shame in being a girl (that would come later) but shame from the disappointment held in the adult faces questioning my sex when I said "girl". I kept wondering what was so wrong with being the girl I was and not the boy I was not?

Fortunately my Ma didnt give me any grief for the girl I was and my Dad seemed to take great pride in it. He even encouraged my interests with gifts like a baby blue battery operated motor bike when I was three or the maroon and black mini-bike when I was four, which he drilled holes in the bike's frame to fashion training wheels till I was comfortable enough to ride without them a year later. I also received no fallout or weirdness from adult relatives or cousins, cousins of whom my closest allies were only boys. It was only strangers/non family adults that seemed genuinely uncomfortable and perplexed by me/my looks/my behaviour/my mannerisms.

I do recall upon entering kindergarten, some mild confusion/uncomfortableness from other kids. I remember specifically during bathroom lineups getting into the girls line and boys yanking me back into their line, whereupon the teacher placed me back into the girls line. I also remember being mortified when such situations occurred (and they occurred often-sometimes still) and filled me with embarrassment. But boys claiming me a their own would follow me all through school. Knowing I was a girl, but also knowing I wasnt like any girl they knew. I was one of them, without being them. Going back to the kindergarten bathroom situation, it was the teachers abrupt actions to physically guide me into the girl's line (several times), it was her uncomfortableness that made me uncomfortable, not the other kids. And not my own differences, which by age five I was well aware.

Being allowed/accepted to simply be myself-Lynn-by peers, family and having a VERY athletic body that could do just about anything I required of it, as far as bodies go, I didnt give it a second thought till I was about twelve. This was the first time I became aware of my body when it reminded me I WAS my body. My breast began to grow, not much but enough I could no longer run around shirtless and within a year grew enough to warrant wearing the nightmare called a bra.

I don't know if sports bra's were available then, but had a plain black sports bra been available it would have made the transition to breast a GREAT deal easier. I may still have laid in my bed at night and beat them with my fists, hoping with everything that was within me to awake each morning and they'd be gone, but reality being reality and they wouldn't be, a comfortable sports bra would have felt like a blessing. Yet even the severe degree of uncomfort I had when I developed breasts, it was just that, discomfort, NOT dysphoria. And being one who always wore baggy comfortable clothes, once I got over the bra ickiness, while it wasn't something I loved wearing, I did acclimate to having to wear one. By my late teens I discovered sports bras and never looked back.

At age thirteen, while still dealing with the bra issues, the onset of my period began. The best way to describe my feelings of periods, particularly early on can best be summarized by the writer Janet Frame when she wrote of her feelings each time she was to receive shock treatment "each the equivalent, in degree of fear, to an execution". That is the most honest description of my feelings whenever a period was due and the most honest during, was the execution itself.

Beginning from age thirteen and ending at age 46, I did feel some form of dysphoria/mental discomfort when a period was coming on/on. I did make a conscious choice in my teens to do my best to live/deal with it and as period products changed (huge pads to thin) it was mostly just discomfort/annoyance. Being a lesbian, most importantly being a Butch lesbian I obviously was NEVER going to get pregnant and give birth. Were it readily available at the time, I would have had ablation to reduce/stop my periods without interfering in my natural hormone processes.

It may seem like there is little difference between dysphoria and discomfort, but there is a most critical difference. Just about everyone EVER has felt some sort of uncomfortableness with their body, especially females. That discomfort can be GREAT or it can be small, it can lead to exercising to feel better about yourself, eating healthy or it can lead to an eating disorder. Instilling a healthy self image and a healthy interior can prevent most developing body related issues and where/when body issues arise help to remove all or most body discomfort from them.

Dysphoria is rooted in function and control, specifically bodily functions and the inability to control them. This can be bodily functions tied to our sex or bodily functions independent of sex such as voiding. Some transitioned homosexual males have expressed disliking erections because they emphasized that they were male, but only felt displeasure AFTER they took pleasure in their erection. These feelings are akin to a dieter who cheats with a peace of cake, enjoys eating the cake then feels guilty/bad afterward-that isnt dysphoria, thats regret and self loathing.

Females who hate dealing with periods (every female who's ever had even one), females complaining of the dreaded "shark week" or a visit from "Aunt Flo", their discomfort/distress/annoyance in and of itself also doesnt qualify as dysphoria. Gender Dysphoria as it is defined, does not exist. Prior to its debut and the criteria that followed, no person or either sex met the GD criteria.

When Psychology sold its soul to Big Pharma, in its blind ambition for scientific legitimacy, it relaxed or tossed many of its former discerning practices. It is no secret that the young, the intellectually slow and emotionally damaged and fragile are dramatically susceptible to the POWER of suggestion. It is also no great mystery that the rise of Gender Dysphoria diagnoses, much like the rise in Bipolar, ADHD, Autism etc followed AFTER the criteria for these disorders were both broadened and wildly publicized, resulting in hundreds of thousands misdiagnosed and most certainly mistreated.

Body dysphoria is VERY real, VERY distressing and currently has no known clinically successful treatment/cure. Transgender transition is a mentally/physically VIOLENT form of treatment for Gender Dysphoria and since nearly all seeking help for Gender Dysphoria do not adequately meet GD criteria, the treatment is useless and unsuccessful. Transition as treatment/cure for Gender Dysphoria is akin to treating the common cold by way of leg amputation. The focus of the cold would be redirected toward the missing limb, but the cold itself while not the focus would still be present/uncured. And due to the missing leg, a host of other issues would then ensue.

And when those like myself, who would have met (and then some) or even have moments where we might still meet Gender (body) Dysphoria criteria, we found help in the form of common sense, maturity and lovers who didnt shame us, who instead reminded us we were MORE than our periods and our periods didnt make us disappear. But even were transition used as treatment/cure for the TRULY body dysphoric like myself, the treatment is an act of disappearing and burying problems has NEVER made problems go away. And once upon a time, uncovering problems was the root of psychology.