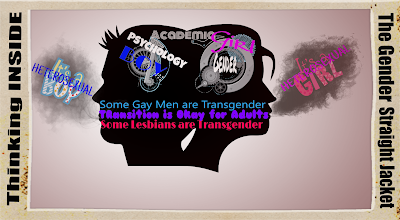 There is a current (pre) school of thought among some academics and psychologists speaking out against the trend of transitioning children/young teens. On the surface, amid the transgender explosion, this sounds like some sort of progress back toward common sense. But just below the surface lurks the same shark infested waters gays and lesbians have been swimming in since our lungs took their first breath of air.

Not a single one of these professionals showed any concern as adult lesbians were swept under the first tide of transition trends twenty plus years ago, despite many now gravely ill or worse dead (including once lesbian leaders). Lesbians who were kicked out of their homes/families because it went against some god or other. Lesbians who allowed themselves to believe they were really men trapped in women's bodies and it wasnt their fault. Lesbians who hoped and prayed transition would fix all that. Lesbians who once on testosterone aged as rapidly as their sexual attraction switched from women to men. Lesbians whose scarred chests was/is a permanent reminder of their sex.

Nor did any of these professionals bat an eye as growing numbers of minority gay men transitioned. Gay men who because of their race could not afford doctor prescribed drugs and surgeries. Gay men who were harmed or worse  died from back alley castrations, taking a female friends birth control pills or illegal "Pump Parties" where they were (are) injected with auto shop silicone. Gay men who were beaten or died at the hand of a "john" because they use/d prostitution as a means of garnering money for transition meds/surgeries.

None of these professionals uttered a peep from 1994 to 2005 when gay/lesbian children, age infant to three, were being diagnosed with Gender Identity Disorder. A label that would open their immediate future to hormone blockers/non FDA approved hormones and mutilative surgeries.

None of these professionals called out sites like YouTube to be shut down (still havent) for promoting Trans Trending among lesbians (youths and adults), despite doing just that (shutting down) years ago Pro-Ana sites.

But then some of these professionals had young lesbian daughters who got caught up in Trans Trending and suddenly we're at Peak Trans! And they're starting blogs and websites professing the dangers of transitioning GENDER NON CONFORMING youth! Failing to see the harm or the sheer ignorance of their middle-of-the-road-some-people-are-REALLY-transgender approach! And dont waste your time asking any about autogynephiles, in typical heterosexual fashion, these professionals believe THEM (the greatest number of transitioners to date) RARE!

This heterosexist Gender Straight Jacketed thinking is why GENDER NON CONFORMING was such an easy pill for them to swallow. Had any of these professionals bothered to garner enough knowledge of homosexuals/homo culture/history for them recognize what NORMAL homosexuals look/act/function etc like they might be a little less for adult transition and a little more for educating parents/schools/society on how best to support homosexual youths pre-school to high school. They might realize there is no RIGHT way to be a heterosexual male or female and no WRONG way to be gay or lesbian!

Instead, these less-than-lunatic-fringe professionals who are seemingly on our side, are only interested in ferreting out the REAL transgenders among school children. Meaning those like this :
or this:
These and less extreme narratives hold the classic transgender signs that even our seasoned professionals with the best of intentions would flag for childhood transgenderism, whereby the transgender signs arent likely to change with age. One thing they would have right? Those signs didnt change with age. What they would have drastically/horrifically wrong? Those narratives are mine and I am not remotely transgender, but lesbian.

That these professionals believe some transition is acceptable tells us they believe some homosexuals are wrong.