Trans Males Coercing Lesbians into SEX with them? I dont think so! 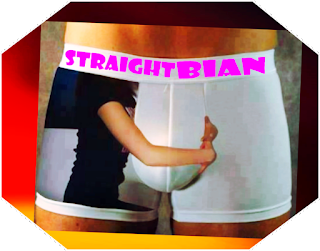 A more recent ruse from STRAIGHTBIAN is declaring online trans males (autogynephiles) are coercing/pressuring (I've also seen the word forcing used) lesbians into having sex with them. There are several issues with that, the first being:
and second and most important:
My wife and I daily observe Lesbian IDd STRAIGHTBIANS playing school yard boy/girl games with trans males. Wasting both their own time and Lesbian time when Lesbians are being asked/expected/coerced into helping them defeat the Big Bad Wolves. And with each defeat, within a days time, these same Lesbian IDd STRAIGHTBIANS seek out/target a new set of trans males to engage with, and AROUND we go!

While Lesbian gullibility and fierce protectiveness toward women may ensnare some dykes into arguing (FOR STRAIGHTBIANS) with trans males, heterosexuality keeps STRAIGHTBIANS going back to trans males for more.

To my LESBIAN sisters, if you run across ongoing arguments with trans males by STRAIGHTBIAN/RadFems that over some form of transwomen arent women, by golly RUN THE OTHER WAY! STRAIGHTBIANS brought transgender into the lesbian community, and now STRAIGHTBIANS are using Lesbianism/Lesbian resources/Lesbians themselves to fuel and fan hetero flames between themselves and the men they (pretend to) hate.