Femininity and the Heart of Femme 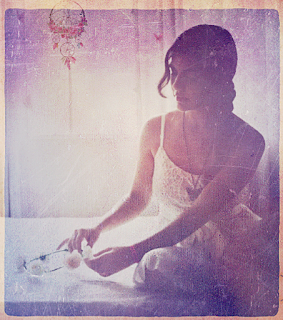 I view the femininity held by Femme bodies in the same way I view the butchness born of Butch bodies. I see it in its rawest nakedness, stripped bare of all artifice. Femme femininity isn't about the clothes choices a Femme is sporting, it is how she occupies and moves in or out of those clothes. Femininity in the general has through patriarchy come to have more to do with performance (for the male gaze) than simply being female (feminine bodied), whereby clothes DO make the woman. It is clear this is a MALE driven ideology proven over and over by trans males who perform their (male) version of "female" through a SEXUALIZED caricature of constructed hyper femininity. Straight women derive a false notion that women can utilize femininity to capture the male gaze and in doing so achieve power along side patriarchy, nothing is further from the truth. There is a definitive difference in being feminine and performing femininity, one you do on your feet, the other on your knees.

Within Femme Femininity there lies an open field, a field of play, expression, living, often unknown or forbidden to male dictated femininity. While this field is not always free from patriarchy, it is none the less a field where how a Femme expresses her feminine body is not determined or dependent on the male gaze or male approval. Butch females are often viewed as rebels, their lives radical, because Butch females externally display a radical difference in how they appear/function as females. But the truth is Femme lesbians are every bit as rebellious and radical as Butch lesbians, maybe more so. Because they rebel through femininity (presume heterosexual norm). That thing men believe they hold in a vice for their own sweet cock's pleasure. Femme femininity is a kick in the balls of patriarchy.

The femininity owned by Femmes is both REAL and Powerful, because there is Power in the REAL! Unlike the costume of constructed heterosexual femininity, Femme femininity cannot be donned anymore than it can be strip teased off glove by glove. The fabric of a Femme's femininity lies at the very core and depth of her lesbian heart.