This STRAIGHTBIAN ditty was tweeted by RadFem Collective earlier today promoting a diatribe on Butch/Femme by Sheila Jeffreys. 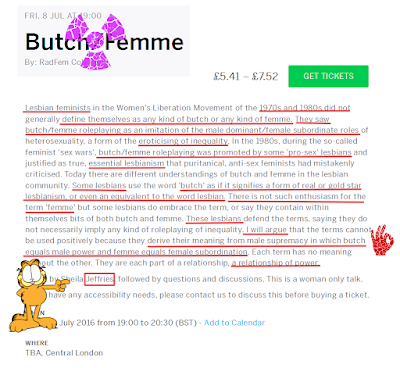 From this we can gather retired academic STRAIGHTBIAN Sheila Jeffreys has clearly not retired from flapping her gums about that which she detests but knows not, i.e. lesbians. Particularly Butch/Femme lesbians whom she has vehemently despised, attacked and inaccurately attributes to every kind of dyke EXCEPT  Butch/Femme! Jeffreys is still (40 yrs later) declaring Butch/Femme as faux/deviant lesbian relationships that are fraught with feminist issues because they draw (mimic) directly from hetero-patriarchal (sexual) power structures that occupy male/female relationships. For a lesbian, Jeffreys seems to focus a good deal on heterosexual SEX SEX SEX relationships and the issues they spawn. Easily interpreted to mean, according to Jeffreys (RadFems), feminism can and will never function inside heterosexuality/heterosexual relationships or lesbian relationships SHE deems STRAIGHT!

In Jeffreys life long obsession with Butch/Femme, she has never once differentiated Butch from any variety of dyke and continues today lumping all together wherever/whenever it suits her STRAIGHTBIAN agenda. Jeffreys imposes similar ignorance where Femme is concerned, lumping STRAIGHTBIAN queer-femme, high-femme right in with Femmes themselves, with no seeming rhyme or reason. STRAIGHT privilege abounds, STRAIGHTBIAN Jeffreys doesnt have to bother with particulars where minority lesbians are concerned, our LEGITIMATE lesbianism unhinges STRAIGHTBIAN club rhetoric.

Jeffreys, not surprisingly, is a proponent/advocate of gender non essentialism, used both as a vehicle to place her squarely in the Lesbian camp as well as blow the gender door off its hinges inviting transgenderism STRAIGHT into the Gay and Lesbian community where it dominates today. More on this in a future post. 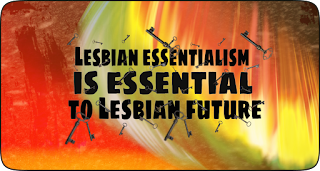 Sheila Jeffreys has made it her life's career to unhinge Lesbian from Biology (In my book, Anticlimax, I suggested a different tactic, the deliberate construction of ‘homosexual desire’. I defined ‘homosexual desire’ as eroticised sameness of power whether expressed within lesbian, gay or heterosexual relationships) and where she has been unable to do so, she muddies and uglies Lesbian

You read that right, Jeffreys declares Lesbian a fucking "theory"! Without Lesbian being removed from the biology that which it stands, STRAIGHTBIANS like Jeffreys are, well, just plain STRAIGHT.

My wife and I are the ONLY kind of lesbians that can and do exist (biological) lesbians. Specifically,  she is a Femme lesbian and I a Butch lesbian, two lesbian females BEING lesbian females 24/7. We have together reached an age and a disgust level where neither of us can stomach another mouthful of the STRAIGHTBIAN bile DICKtating our lives misread/misinterpreted/misunderstood or outright slandered back to us or our fellow lesbians! The jig is up and the gloves are on the mat.

Butch/Femme are BIOLOGICAL states of the rarest kind of LESBIAN Sheila, but that rarity doesnt remove homosexuality from our very cores, nor any other kind of dykes. Except YOUR kind Sheila, the STRAIGHTBIAN kind, which lets face it Sheila-just isnt kinda straight, but IS definitively straight.