From the end of Part 1 of Dr. John Money and the THEORY of Gender Identity-A Postmortem: "Boys could be taught to be a kinder gentler sex and girls could be taught to excel in math and science, together bringing a balance, harmony and equality long lacking in humankind. Or could they?" The short answer to that question is a simple NO, as generations of humans prove again and again and will go on proving, regardless of fraudulent identity ideologies. Here's the long answer:

The truth is Brenda/Bruce never accepted the girl identity foisted on her/him. No matter how many dresses she/he was forced to wear, no matter how many dolls she/he received as gifts, no matter how long her/his hair grew or how many times she/he was told how pretty she/he was. Dr. Money ignored all evidence confided to him by the Reimer parents on Brenda/Bruce, including his own personal experience and observations of Brenda/Bruce. Despite Brenda's/Bruce's reluctance or rather defiance toward the identity she was being raised (rather the biology he was) Dr. Money assured the Reimers that Brenda was simply a "tomboy" and would need some extra encouragement accepting her nurtured gender identity.

Some forms of that encouragement were ultimately responsible for the suicides of both the Reimer twins, but I digress. While on one of their Dr. Money trips when the twins were age seven, and it was obvious from what Brenda's parents said about her/his masculine behaviour and what Dr. Money could see himself, he began trying to show Brenda/Bruce that she was a girl by showing her how she wasnt a boy. Dr. Money asked seven year old Brenda/Bruce very personal, sexual questions about her/his genitals and how her/his genitals differed from her/his brother Brian's. But Dr. Money didnt stop at pointed questions, he also had both twins strip and forced Brenda/Bruce to view her/his brother's genitals to see how they differ. Then the good Dr. forced naked seven y/o Brenda/Bruce to get down on all fours, then forced naked 7 y/o Brian to mount her/him while simulating a thrusting motion (doggy style sex). All the while Dr. Money took Polaroid pictures of the naked twins simulating sex with each other. Those pictures reside somewhere with Dr. Money's papers at the Kinsey Institute. Dr. Money then instructed the Reimer parents that they should have sex in front of the twins, particularly Brenda/Bruce. When they refused, Dr. Money told Mrs. Reimer she should at least walk around/do her household chores naked in front of Brenda/Bruce to help reinforce Brenda's/Bruce's nurtured gender identity.

If Gender Identity was mutable and required only a brain to be corralled into a Girl slot or a Boy slot, why did Dr. Money (besides his own perverted sexual thrill of viewing children engaging in sex) need to force Brenda/Bruce into being a girl? Why after all the early publishing of Brenda's/Bruce's Gender Identity switch success, did Dr. Money cease publishing on the famous case, even though Dr. Money remained in contact with the Reimers till Brenda/Bruce was a young teenager on cross sex hormones?

Dr. Money both ignored the reported difficulties Brenda/Bruce had right from the start of her/his Gender Identity switch and published Mrs. Reimer's descriptions of Brenda's/Bruce's girlhood successes out of context. Through minimizing Brenda's/Bruce's masculinity/masculine behaviour as "tomboyish" Dr. Money could skirt the truth just enough to have his Gender Identity theory hailed a success: 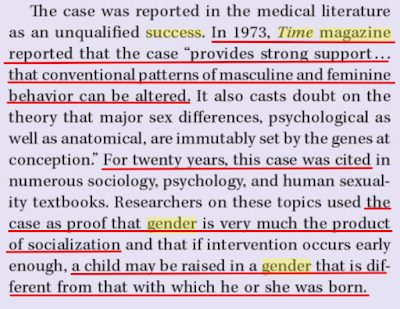 What John Money published on the Gender Identity switch success story and what the Psychiatric community, including Women's Lib/Radical Feminists hungrily lapped up was a complete lie. One that continues eerily residing with us today despite all the evidence to the contrary: 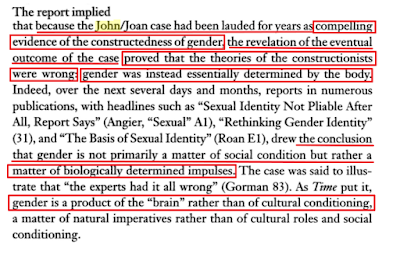 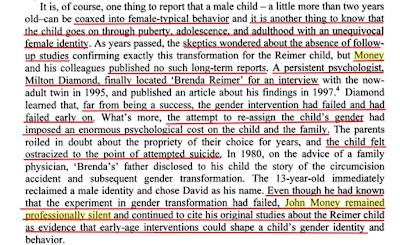 Despite David (nee Bruce/Brenda) being told who/what he really was, a male, the faux distorted warped Gender Identity assigned to him and the twisted sexual abuses toward him and his brother via John Money could never simply be erased. After 13 y/o Brian was told his twin sister really was his brother, he nearly had a nervous breakdown. It wasnt understood by his parents as to why until years later when the boys revealed the (hetero)sexual copulation simulation sessions Dr. Money subjected them to. The puberty age Brian suffered deep homosexual anxieties beyond his already incestuous malaise at having forced simulated sex with another male. Between years of sexualized Dr. Money sessions involving his sister/brother, his home life filled with a constant cloud of anxiety and deception, and an invisible wedge hammed between he and David, Brian Reimer committed suicide at age 36 in 2002. Nearly two years later, a sad, tired and depressed Bruce/Brenda/David followed suit by turning a shotgun on himself.

John Money never acknowledged his Gender Identity theory's failure, even though its failure was solidified in its earliest stages, ie Bruce never acclimated to being Brenda even as a toddler. Instead John Money boasted,  published and widely lectured only of his theory's alleged success. Published works that are still be cited today as evidence that Gender Identity is something nurtured into us by our parents and greater society, rather than something that is developed in utero like our fingers and toes or penis and vagina. How we occupy our surroundings as males and females clearly are affected by nurture, ie conscripted laws based on a bias thats based on a majority. A majority of females behave/function in a specific way and any female who (naturally) deviates from that, isnt doing female correctly (normally). Besides John Money's very serious, very perverted sexual proclivities, he perverted a school a thought based on gender roles rather than gender reality. Gender Identity isnt in your head, its in your genes. And unless every cell in the body is ill, Gender Identity cannot suffer a disorder.

Again due to the abundance of material surrounding John Money and Gender Identity theory, there will be one more post (Part 3) specifically on Dr. John Money.

Dr. Money And The Boy With No Penis (a video)