At the height of the should MEN be allowed into women's public bathrooms/lockers/showers debate, the OBAMA administration made no bones about their HIS views on the matter when they HE issued this letter to ALL federally funded (public) schools which begins:

The letter itself and the school guidelines that sprang from this document are as follows: 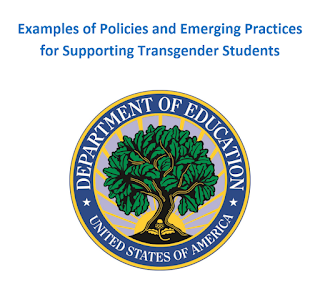 Like one of Obama's first decisions in office (despite millions of US citizens who lost jobs and homes), special rights for Transgenders (authogynephiles specifically) rates highest on his to-do list. Nowhere in these unlawful/coerced special rules, are gays and lesbians mentioned or included. What is included that parents, teachers and concerned citizens should know?

any student at any time cannot be discriminated against from using school facilities such as bathrooms/showers/locker rooms or sports participation based on self reported gender identity, granted nowhere (and having combed through it) in Title IX is gender identity EVER mentioned! EVER!

Aside from the biological sexist prejudice toward female students who will be harmed by this move, what is more worrisome is the REAL harm female students WILL face from horny teen males (and adult male staff-trans or otherwise) ready, willing and thanks to Obama now able to access girls at their most vulnerable time.
According to School Psychologist/authority and trans male himself, Jill Davidson "Most assaults don't happen in public bathrooms" or so-called feminist and voice for lgbT Victoria Brownsworth in a recent article on transgender males in public loos: "The laws are meant – or so their proponents claim – to protect women and girls from being sexually assaulted in public bathrooms. This is certainly a noble concept and as a rape survivor, I appreciate the sentiment. The thing is, there are not even a handful of cases of men dressed as women sexually assaulting women in public restrooms in the entire country. Which makes stoking these fears of men in women’s restrooms a canard."  This is the logical (and trust me I'm using logical as loosely as humanly possible here) explanation for why males claiming transgender status do belong if female private facilities. OF COURSE RAPE DOESN'T OCCUR IN HUGE NUMBERS IN LADIES TOILETS, BECAUSE IT HAS BEEN ILLEGAL FOR MALES TO ACCESS THEM!!! Until now!
Yet Brownworth continues by saying "under the North Carolina law, someone I know well – a trans man with a full beard – would be forced to use the ladies room. Because he was assigned (born) female at birth. And even though I have known him for more than 20 years, I would feel extremely uncomfortable sharing a restroom with him" Meaning a woman whom has known and befriended many trans males/females isnt comfortable herself using the toilet with a masculinized female BUT the rest of us women are supposed to be okay with sharing the bathroom with a male in a dress. Which by the way, gives males greater access to their penis. And where school is concerned, very few self identified transgender males will have had their penis pretzeled. But regardless if they have, according to long term studies, fully transitioned males (hormones/surgeries) criminally parallel non transgender males.


Saving the silver lining to this cloudy nightmare for last, what is most prominent (and surprising) in this FEDERAL document is this ditty early on: 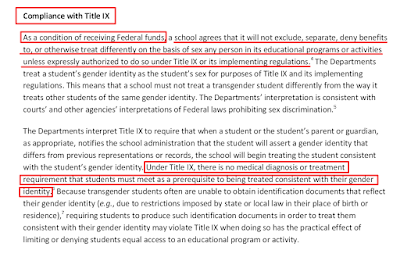 "Under Title IX, there is no medical diagnosis or treatment requirement that students must meet as a prerequisite to being treated consistent with their gender identity."


This statement FEDERALLY unseats Transgenderism from the constraints of a DSM Gender Dysphoria diagnosis! Simplified-NO DSM DIAGNOSIS MEANS NO TREATMENT!
A DSM mental diagnosis is fundamental to federal/state and private medical insurance coverage for trans drugs and surgeries. The Federal Government is obviously on the side of self reporting alone (transgender without diagnosis of GD) and the medical industry's Informed Consent for transgender's who choose to medically alter their bodies. NONE of which any medical insurance agency INCLUDING Medicaid/Medicare should cover! Thereby making ALL transgender changes requiring medical assistance ELECTIVE!

I dont know whether the Obama Administration screwed up or fear the growing tidal wave of transgender children/youths and adults will burst his Obamacare baby, but either way, its obvious the next step is a DSM 5 revision WITHOUT Gender Identity Disorder/Gender Incongruence or Gender Dysphoria.


We all know that Title IX was implemented to protect females from institutionalized sexism! If the Obama Administration cannot manage to figure even that out, the American people, particularly females are in a lot of trouble in the short term. But by separating gender identity from a DSM diagnosis and putting gender identity solely on self reporting, NO healthcare Federal or private should cover or have to cover the enormous developing financial strain of transgender surgeries and LIFETIME supply of elevated cross sex hormone use which studies show will cause later secondary health issues. From this we can also deduce the FEDERAL government's (FDA) continued response of keeping cross sex hormones for the purpose of transition on the UN-approved list.

This information is being sent out to every medical insurance provider we can humanly send it to, I suggest you reader, do the same. Making transition elective wont stop everyone transitioning, but it will certainly slow it down, particularly where children and teens are concerned. 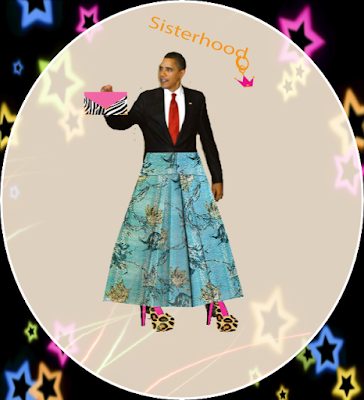