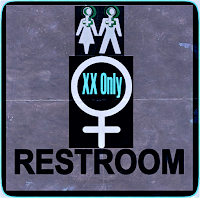 I’ll make this short and sanguine. Regarding specifically the public bathroom debacle and non-specifically any debate using lesbian lives and lesbian narratives to push your warped fucking agenda:

States passing laws banning men from women’s spaces; men with dicks intact, men with pretzel dicks, men in dresses, manly men, prettified men-men men men. These laws do not adversely affect dykes! Dykes like me have always dealt with a certain amount of shit when accessing public bathrooms. No laws made or reformed is ever going to change that, nor do we need it to! We would rather endure a little public scrutiny rather than unnecessarily subject females to rape triggers/sexual abuse risks and the stench of male urine!

Using Gender Non Conforming to swoop dykes into your fantasy of imagined sisterhood is both misleading to the general public and a fucking insult to ALL dykes! You can linguistically corral GNC with transgender all the fuck you like, but NO dyke is GNC!!! Dykes being dykes conform perfecting to normal lesbianism! That Transgender Agendists embrace the “idea” of GNC lesbians firmly establishes that Transgender Agendists believe some lesbians are normal and some lesbians are abnormal!

Every flavor of dyke is NORMAL! What is not normal is transgender males and their Obamafied allies using hetero-patriarchy to measure lesbians with! Transgender males do NOT get to define dyke! Lesbians were NOT invented to legitimate your fucking “lady” perversions!

Whatever issues dykes have to deal with in public bathrooms are OURS to deal with, not yours! We do not need MEN to fight our battles, we do not need men period! And we most certainly do NOT want to be the reason vulnerable girls and women become fuck fodder for your bathroom fantasies!