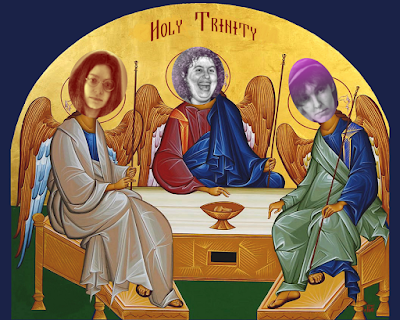 ...And you sit there and talk revolution
but can you tell me just who's in command?
when you tell me the forces we are fighting
then I'll gladly join and make plans
but for now only our t-shirts cry freedom
and our voices are gagged by our greed
our minds are harnessed by knowledge
by the hill and the will to succeed
and if that's not what you believe
would you just let me know I'm not standing alone
that I'm not just a voice in the crowd...
From Vigil in a Wilderness of Mirrors by Fish

These lyrics were written in the late 1980's but they could easily apply to the current state of feminism, particularly the sect calling itself Radical Feminism, aka RadFem. Sadly the only revolution existing among RadFems consists of idle chatter, tweets, FB shares and some kindergarten arts and crafts even. There is also at any given time a discrepancy regarding who exactly they’re fighting: men, men claiming to be women, men who haven’t had SRS, men who have, women claiming to be men, women who “look” like men, women who “act” like men, the rich, the poor, whites, non white, academics, non academics, feminists, non feminist, lesbians, non lesbians, prostitutes, men who pick up prostitutes, sex slavery, the porn industry…an endless list. And that’s not to say that there isn’t an overwhelming list of issues that feminists/RadFems need to address, there is. But instead of agreeing on a single issue and tackling that issue till it no longer is a threat like some of former suffragettes/feminists of yesteryear, current RadFems are busy at work retweeting and FB sharing articles with each other, along with copious pats on the back for doing so. Meanwhile the only women privy to RadFem tweets and FB shares are the small few who are on each others private lists. The women who truly NEED feminist news, particularly feminist interventions, remain on the outside. For they are either too poor, too black, too non English speaking, too uneducated, too busy selling their bodies to feed their children, too, too, too. RadFems however aren't interested in too's.

RadFems covet, then monkey see/monkey do Dworkinesque hypocrisies of; ignore mental health troubles, child speak, narcissism, classism, racism, lezbophobia, male hatred, two facedness, misogyny etc. Women (straightbians) claiming lesbian asylum for political reasons. Women working with Trans male clients from 9 to 5 while in their spare time demanding “twanz-women” stay out of women’s spaces. Women making exceptions for Trans males who have had their “penis” mutilated. Women more invested in getting laid than in making the world a better place for females in the future. Women with slews of mental diagnosis made from the very male medical machine that is now transitioning children in order to eradicate homosexuals, in short, women incapable of revolutionary thought or action alike. It is these motley crew who are supposed to be some of today’s leading feminists, but you wont find a radical or feminist between the lot of them. But you might find them among the Radical Feminists of yore, like:

Shulamith Firestone, whom you might remember for writing The Dialectic of Sex. Firestone a RadFem darling and believed RadFem ground breaker. What Firestone did manage to write before psychosis dominated her mind was as much indebted to French feminism as her strange futuristic notions of sex and child birth were hijacked from male authored dystopian novels such as (Zamyatin's We, Orwell's 1984 or Huxley's Brave New World). What I find most striking about Ms. Firestone was her mental illness, which seems to be a necessary component (glue?) of past and current RadFems. Shulamith was hospitalized at various times for "schizophrenia" whereby she later became a total recluse. As a female and as a feminist I have to be suspect of her diagnosis, but regardless, she obviously had or developed serious mental issues. And it is these mental issues that seem to be, as they were for Firestone herself, the driving force and cornerstone for Radical Feminism as we know it still.

The she-can-do-no-wrong queen bee of Radical Feminism, Straightbian Andrea Dworkin  (whom died on this day April 9th) was the walking billboard for mental illness. She claims (and I believe her) that she was molested as a girl of 10. This could have lead to her being grossly overweight/unkempt in effort to remove herself from any male gaze. Her attempt didnt work and she later married for a second time ("I love John with my heart and soul"). Her first husband, according to Dworkin, was violent/abusive and like her prostitution, lesbianism and (conveniently timed-promoting new book) rape in a Paris hotel-where proof could have existed, there exists none. Like so many Straightbians before and after her, rather than seek help and confront the gulf within her fractured psyche, she in hereto-privileged fashion declared herself a lesbian, reinforcing lesbianism as choice (all lesbians need is the right dick). RadFem warrior Dworkin built her platform from horrors and struggles (prostitution/lesbianism/rape/death threats/domestic violence) experienced by OTHER women and narcissistically claimed them as her own! It is one thing to use women's collective adversity to make important collective points or aid in passing laws benefiting women, it is quite another to flat out lie, giving rise to your own individual ego and pay check alike.

Another Radfem sweetie (born today April 9) is Valerie ("I'm no lesbian") Solanas, known as much for shooting Andy Warhol and others (to make her famous where her talents failed) as for her psychotic  SCUM Manifesto. Solanas, like Firestone was a paranoid schizophrenic and like Dworkin she also had a history of molestation. Solanas like Dworkin and Firestone claimed, she too was a lesbian although she had regular romantic/sexual relationships with men.

Past RadFems like many RadFems today are defined by their
While misogyny and the male power systems which support misogyny can be held accountable for some of the feeble architecture of Radical Feminism, like the RadFem trinity (Firestone/Dworkin/Solanas), most women claiming RadFem today are so collectively spiritually/mentally bankrupt even their seething hatred of men cannot unite them in a common cause. One wrong tweet or clumsy FB comment can put an interrogation spotlight on another RadFem where RadFems collectively hungrily await the verdict to tear the woman to shreds. Like Trans (you're with us or you're transphobic) Ideology, Radical Feminism isnt a place where women can freely discuss feminist issues. RadFem critique (no matter its accuracy) is swiftly labeled victim blaming, misogynist or flat out stupid. Either way, those doing the critiquing are dismissed or worst, silenced. There is nothing radical or feminist about this approach to women's issues, there is also nothing period. Radical Feminism was born in the domestic sphere, a vacuum. RadFems today may have replaced their 1970's Hoover with a high tech Dyson, but their ideas are still swirling around a dust filled container.