This post is in response to responses generated (here, there and everywhere) from the post Lesbian Warning Signs You Just Might Be Dating: A Straightbian. Responses have ranged from timid agreement-fearing PC reprisals to blatant dismissiveness and slanderous accusations of biphobia/misogyny and maven misdeeds against meekster RadFems. A summary of the responses could be taken from a page (or poem) from Emily D-tell the truth but tell it slant! The trouble with that being, I am not a hermetic Rapunzelian genius carefully braiding silent word webs, nor is the Truth colourful play dough to be molded according to want, need or disorder. RadFems are the first battalion in line to RIGHTFULLY point out transgenders are NOT exempt from critical review merely because they're trans and yet RadFems will react as if you kicked their puppy for any critical analysis toward Radical Feminism/RadFem theory or hetero women collectively, regardless of the volume percentage of Truth!

In the course of just a few years, I have seen thousands of angry arguments and volatile conversations from Straightbians and the like, over their refusal (phobia) to date/fuck/partner with trans males. Outside of trans males themselves, its rare to see a woman argue against them in their choice to date whom they want. Their hetero privilege, (and it is a privilege) among other Straightbians at least, IS sacrosanct! But the moment an actual BIOLOGICAL lesbian says NO-I am a lesbian and I will only partner with other lesbians, suddenly we're biphobic exclusionist cunts! If lesbians dare to insist on REAL LIVED narratives of dyke life/dyke experience and lezbo history, completely foreign to the Straightbian (casual or serious), our tiny fractured and drastically outnumbered lesbian loving lesbian community is told (past and present) in no uncertain terms, lesbianism is a choice and lesbian culture is diaphanous!

I havent even lived a half century, but in my adulthood alone I have witnessed FIRST and secondhand lesbian pride realized and then revoked. I have read lesbian discourse that thoroughly outlined Straightbian take overs in lesbian feminist movements and have personally known lesbian feminists who attested to those facts. I also watched helpless as parts of the lesbian community were bullied, monopolized and pressured to date Straightbians regardless of attraction (women are above objectifying women and should never sexualize other women or not date women regardless of size/shape/attractiveness). I watched equally helpless as Straightbians (HIGH femme/Queer femme) held court/lauded over/judged and put into question the femininity of Femmes and other lesbians in many different lesbian forums/spaces/groups (real/online). I ceased being silent when Straightbians used dyke insecurities (dyke shame and dysphoria) to flirt/flatter and philander dykes into "male ID-ness"/male pronouns/testosterone and double mastectomies. But no matter how hard dykes struggled to man up, sacrificing family, friendships and their mental and physical health, Straightbian g/f's ALWAYS went back to men. Dykes on testosterone for long enough did so as well. Some died of AIDS from having sex with gay men, some died of cancer, some died of cardiovascular issues, some committed suicide and some live quiet rather unhappy lives today with other trans females like themselves, their lesbianism shredded and ruined.

I owe NOTHING to Straightbians, they werent my allies when I was a young insecure shy Butch and they certainly arent my allies now! My allegiance as a dyke will ALWAYS be to dykes! And as an elder of sorts now, it is my duty to guide and protect dyke youth today. Dykes who have a much different and dangerous stretch of road to traverse. The dangers that dyke youth face today go well beyond being bashed or duped by a Straightbian. Lezbophobia and lesbian invisibility has never been so high and lesbian shame so extreme in decades. And the normalization of dyke equals transgender/gender non conforming so in your face and in our schools. And damaged or dissatisfied Straightbians so ready, willing and able to pick up a transitioned dyke like she's the latest pair of jeans or new diet pill.

The roads of my dyke youth could have got me bruised, bashed or even killed-but whether I woke up with a sore noggin or died with my Doc Martin's on, I did so AS a DYKE not a dude!

The following (as this subject has and does affect both myself and my wife) post is my wife's experience both online and real-time with Straightbians: 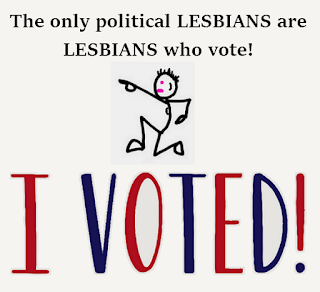 Dirt's recent post about Straightbians has certainly elicited some strong responses, ranging from agreement to outright disdain and hostility. Both of us have lost followers over it; she because she wrote it, I because I retweeted it. It is sad that such a topic can be so divisive, but the very divisiveness this topic provokes only reinforces it's importance.

For those of you who are reading this, I implore you to read on and truly consider our points before becoming angry or dismissive. We have both known many lesbians over the years, both in person and online, and have a great deal of experience with this topic, so we are not just winging this, we are living it.
Also, just to be clear, neither Dirt nor myself is trying to tell anyone what to do. Everyone is responsible for her own life. If lesbians choose to partner with Straightbians, that is certainly their choice, and if both parties are honest with themselves and each other, more power to them.  It wouldn't be my choice, but it is not my life.
Over the years, I have witnessed numerous examples of Straightbians wreaking havoc upon lesbians' lives in a variety of ways.  In some cases, lesbians I know personally have invested not only their hearts, but years of their lives, to women who were not truly sexually/romantically attracted to other women; women who defaulted to (alleged) "lesbian" because of personal choice, novelty, excitement, attention, and/or trauma.
I have never known any of these relationships to be truly "happy"; most break up relatively quickly, which is actually the best case scenario for the lesbian.  One relationship that I know of personally lasted 20 years and was fraught with distance and difficulties...before the straight one returned to men.
My lesbian friends have reported to me that these straight women never truly wanted to touch them sexually; that their sex lives were one-sided encounters with pillow princesses. More importantly, this distance is not just sexual. So before you say to yourself, "sex isn't everything" (and I agree, of course it isn't), please realize that the sexual deficiencies in these relationship are symptomatic of an larger underlying disconnect, an imperceptible fault line running underneath the surface.
Here's the thing: Straight women (even liberal allies) do not, and cannot, totally understand what it is like to be a lesbian and they exercise their straight privilege over lesbians, typically without malice or even awareness.

My straight friends have to be reminded on a regular basis of the numerous privileges they have that lesbians rarely (or in some cases, never) have. Here are just a few examples of straight privilege that my heterosexual female friends enjoy (there are many more, but that is another post):

Straight women have propositioned me over the years. In one notable case, I politely declined, explaining that I have a strict no-het policy, but also explaining that I was in a committed relationship at that time. She said (crudely but tellingly) "Eating ain't cheating!" In other words, her view of a relationship with another woman was so casual, so meaningless, that it would not even qualify as cheating on her husband!

Think about it: Don't we all want our partners to WANT us for exactly who we are? If someone is not oriented as a lesbian, she can never experience the sheer desire nor the depth of connection with another woman that a lesbian can feel. It is not wrong to be straight. But it is wrong to be dishonest with yourself and/or someone else regarding your true orientation.

I think we can all agree informed consent is imperative; but if a Straightbian is appropriating lesbianism for her own purposes without disclosing it to her lesbian lover, then informed consent is not happening. Rapish? We all deserve to know the motivations and orientation of those we are intimate with.