Poison in the Well: Michigan School Proposed Policy not so Popular with Parents 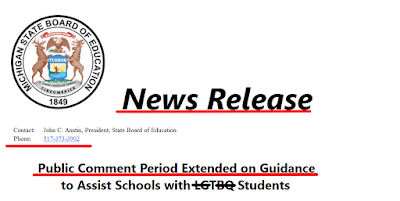 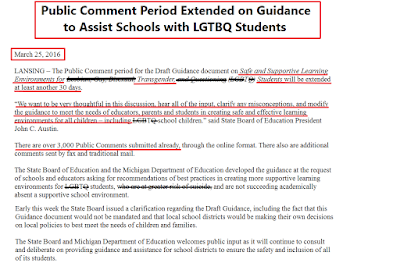 I have a thorough break down of the guidelines eugenics program here and here.

This latest release highlights the extension (by 30 days) for public comment from parents/teachers and concerned citizens, after already having received over 3,000 comments. Perusing the comments, it is obvious why the school board is extending comments for 30 more days, the majority of commenters are rightfully outraged! Clearly the extension is meant to generate more comments (how many are really John C Austin's and company?) in favour of the misleading (transgender suicides occur in majority after transition) sexist homophobic piece of propagandize child abuse.

The general public (at least in Michigan) is finally pissed off at transgender blitzkriegs barreling over the human rights of others, so let the transtastic troupe topple-add your comments to the pissed off parents who are putting their children before political correctness.

Persons wanting to provide their input on the Draft Guidance can do so at: www.everyvoicecountsmi.org