LESBIANS ARE MORE LIKELY TO HAVE SEX WITH LESBIANS

A recent article in the Independent blared an offensive, inaccurate and disgusting lezbophobic headline giving the notion that lesbian girls frequently fuck men:

The article takes its information from a study PUBLISHED 2016, despite the fact the data was collected FIVE years ago! Why did it take FIVE years to publish a faulty study? Since equally faulty studies with equally flimsy data and equally minuscule study samples are routinely published today, I can only assume the grant seeking researchers figured rightly; why the fuck not! And marked another notch on their collective purse!

The study and its many many faults, so many I'll focus on the most obviously lazy/ignorant ones:

The study doesnt even make it out of the gate, its title alone is HIGHLY problematic and clearly based on sexual behaviour, sexual partners and SEXUAL IDENTITY. It is unclear what this would have to do with actual lesbian girls/teens. Either the researchers are unfamiliar with dykes, or trying to use their fallacious research to undermine lesbianism.

Beware of the quick drop in altitude, because the study only goes down hill from here, STRAIGHT down hill and fast! 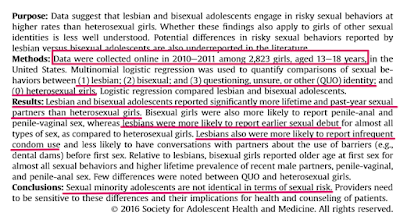 The ONLINE study, in case you just missed that I'll do a quick replay- the ONLINE study concluded dyke children and teens (ages 13 to 18) are more sexually risky/active than any other girl/teen in their study of 2083 female youths. Not only were, according to this study (more like a never studied) dykes gave it up sooner than other female youths AND dykes didnt use CONDOMS! Hmmm now THATS a puzzler! Oh wait, I'm a 48 year lezzie and I too have NEVER used a condom, nor do I know any dykes in or near my age bracket to have ever used a condom. Why? Wait for it......wait for it.....LESBIANS DONT FUCK MEN! LESBIANS DONT FUCK MEN AS CHILDREN AND WE DONT FUCK MEN AS ADULTS! Have some lesbians pressured by internalized lezbophobia forced themselves to fit in by dating/having sex with males? Of course. Is this study pointing to those lesbians? Lets see....

First lets look at just how many dykes we're talking about here:

Okay, so of the 2,823 female youths (or whoever took this online study saying they were a female youth-there was no way to verify the age or sex or sexual orientation of a single person from this study) 364 were labeled lesbian. 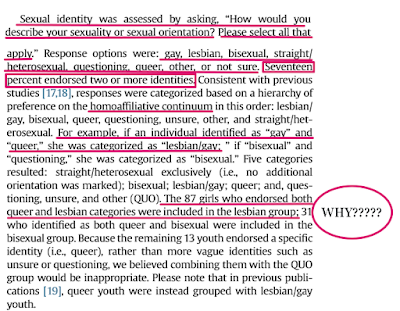 So of the 364 females who both identified as lesbian and queer (87) were tossed in the dyke pile and the study OMITS to tell us the number who selected gay and queer who also were thrown in the dyke pile! Living in post modern/post queer theory times its common sense that any female claiming queer is a special-hetero-snowflake which dont by a LONG shot a dyke make! Like this study did with its data, ("Missing data were imputed using Stata’s “impute” command for all variables except the principal outcomes") we'll assume the majority of these non dykes were put in the lesbian group because the study couldnt have went on to trash lesbians otherwise. So what was the actual number of verifiable lesbians in this faux study? Were there any REAL lesbian kids at all?

most recent partner was male or to have engaged in penile-vaginal or penile-anal sex with the most recent partner than heterosexual peers. Nevertheless, 22% of lesbians reported a recent male partner. Furthermore, lesbians were more than six times as likely to report infrequent condom use". So according to the faux study, a whopping 78% of lesbian participants were NOT doing it with dudes, but the researchers choose instead to focus on the 22% (although later in the study the 22% magically shrinks to 17%) of the lesbian participants who said they did have sex with a male. Isnt it more likely that the 22% of the "13 year old" (yes I said 13) lesbians who "appear to initiate penile-vaginal sex at earlier ages than heterosexual girls" are actually sexually abused/confused heterosexual girls who hate dick/need dick to love them? We dont need a rocket scientist to inform us that sexually abused females statistically are likely to act out sexually within their sexual orientation!

The study should not only have NOT be published, worse it should NOT have been picked up by the Independent! And based on the article written for the Independent, I can only assume it was take-your-mentally-challenged-child-to-work day! The title of the Independent article-Why lesbian teenagers still have sex with men-leads one to believe teen lezzies are being fucked by grown men in droves! The article never tells us who the MEN are, (older brothers? fathers? uncles? nice mr. johns across the road?) if the MEN were prosecuted for having sex with 13 or 14 year old lesbians, or how these young lesbians were coping with rape (statutory or out right)? Instead the article props good heterosexual girls up on its shoulders while it slut shames lesbian children for fucking grown MEN! The article in the Independent is very much like the study itself; lezbophobic, heterocentric, incorrect information gathered from inadequate means. Data so thin, if printed, you couldnt wipe your ass with it without your hand smelling like shit.