Lesbian: What it Means-What it Is

In regard to numerous confused and angry responses to recent posts regarding Straightbians, it's become abundantly clear that few know and/or understand (besides lesbians) what a lesbian is, or what the term lesbian means. 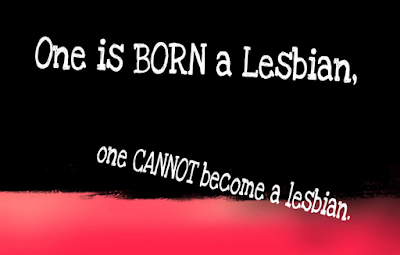 The primary confusion seems to be putting behavior over biology.  Just a few examples of statements (both online and in person) exemplifying this confusion/misunderstanding are as follows:

This thinking is problematic for a plethora of reasons. Some of the main reasons being:
There is only ONE way to become a lesbian, and that is genetically engineered as a lesbian in utero.
When born a lesbian:
Between my wife and I we comprise a century of lesbianism, neither of us are prudes and neither of us believe all lesbians are Gold Star dykes like us. But as lesbians, who know and have known tons of other lesbians, we know no matter how or when you come out and taste life itself-you NEVER go back.