The Makings of Mental Illness: Kayden Clarke aka Danielle Jacobs 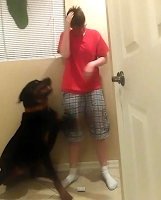 when she staged an "aspergers meltdown" for the camera while her self trained canine companion "calmed" her down. Danielle's video went viral and HuffPost even interviewed HER. From the article: "Jacobs is employed by Target, but hopes to get a job with a dog-training company. She's saving her money to adopt a puppy she'll teach to become a service dog. And while she continues to suffer episodes like the one in her video, she said Asperger's has given her a talent for which she is grateful. "People with autism have a really high IQ and tend to figure things out pretty quickly," she said.".

What is obvious from the HuffPost article/viral video (now taken down) and her Danielle Jacobs Youtube account is Danielle was a VERY attention seeking disturbed young woman who has tried for years to use mental illness (real, imagined and fudged) to garner her 15 minutes of fame. And using a different DSM diagnosis like a magician trying to find the right trick to capture/recapture and WOW her audience.
We can glean from Danielle's mother 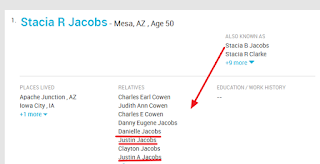 that her money/credit and other court issue histories might shed light on why she and her sister are trying to create a scenario from her mentally unstable daughter's death to file a lawsuit over:

We know from the length in at least one state from Danielle's father's criminal history that Danielle would have had a VERY unstable childhood: 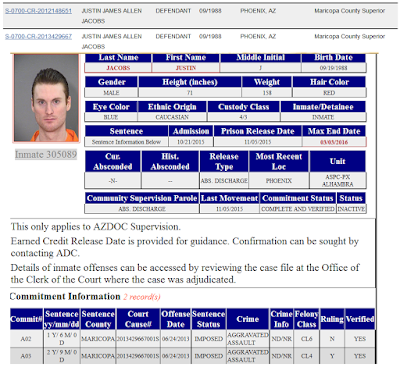 We know during his trial his mental state was in question enough to require mental examination:

While we do know someone/s had a Protection Order against Danielle, we do not know who/why : 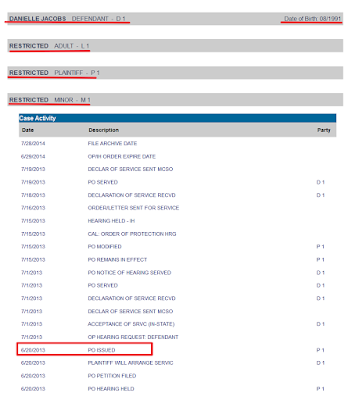 Was it Danielle's mother who filed the PO? Her aunt? Is this why the extremely disturbed (violent?) Danielle was living apart from her extremely dysfunctional family? Dysfunctional enough to cause or cause Danielle to think she suffered from PTSD, Anxiety Disorder, Bipolar Disorder, ADHD, Autism, Asperger's, Attachment Disorder, Auditory Processing Disorder and Cognitive Disorder. One thing is for sure, Danielle was disturbed enough that multiple doctors/therapists/psychologist/Gender Specialists would NOT give her access to male hormones, which was the latest (2 months ago) of Danielle's endeavors to renew her license for an additional 15 minutes of fame via YouTube. And even that (transgender-transition) was obviously just another DSM disguise Danielle tried on/took off and added to her collection, as her YouTube channel (active 2 days ago) illustrates-she maintained Danielle Jacobs and had let go of her Kayden Clarke. (inactive for over a month)

What is CRAZIER though than the violent, dysfunctional family the created Danielle, is the shit storm of media frenzy whipped up by the Transgender Politic! 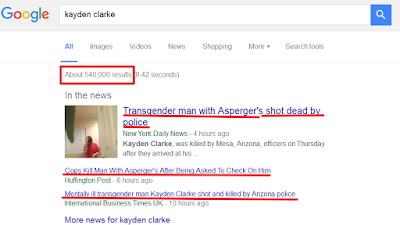 Article after article insinuating or stating as if its fact that the two police officers who were FORCED to defend themselves against someone known to the Arizona judicial system for being mentally unstable and VIOLENT on various occasions, including as Danielle herself stated pulling a "45 on a police officer" that these officers acted in bad faith. Even the actions of the two civilians whom Danielle sent a suicide threat are being raked over the HOT trans-coals because they reported the (like they should have) suicide threat to the police. The simple fact is had they not and Danielle killed herself alone, the Transgender Community wouldnt have another corpse to run up their putrid propaganda flagpole. Danielle would have merely been another suicide by a disturbed young woman from a dysfunctional family.

So why is the Transgender Community there now???? When in 10 minutes the Transgender hounds will trot on sniffing sniffing sniffing for a new corpse and Danielle will be forgot, wrong pronouns and all. And the only benefit from slandering the police/the media is Stacia/Kamela MIGHT be able to sue and live happy for 5 minutes till the money is blown. 10 + 5 equals the 15 minutes of fame that Danielle didnt live to see.