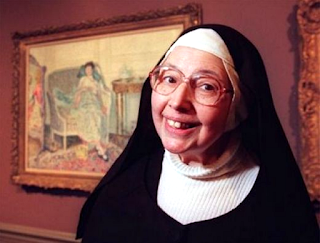 Sister Wendy was born in South Africa in 1930. Sister Wendy felt from her earliest years that she was born/meant to be a nun (devotee to love/God). As a girl, Sister Wendy moved with her family to Scotland and when she was 16,  joined the Sisters of Notre Dame. From there, in 1950 Sister Wendy enrolled at the University of Oxford, graduating (1954) with high honers in English. She then attended a teacher’s college in England, after which she returned to South Africa where she taught for 15 years.

Due to ill health Sister Wendy returned to England to the Carmelite monastery in Quidenham, Norfolk becoming a consecrated virgin/hermit. She spent most of her days in prayer, living with the most basic of modern conveniences (she had never seen a tv). Sister Wendy had long been interested and moved by art, likening great art to prayer. It was during this time (the early 1980s) Sister Wendy decided to try her hand at writing art essays for British Journals. Later in the decade, her first book on art Contemporary Women Artists, was published.

Through a BBC producer's interest in her first book, Sister Wendy made her television debut in Sister Wendy’s Odyssey (1992) where she went on to do several other BBC art specials. Sister Wendy has also published quite prolifically on art, the Bible, and spirituality.

Sister Wendy Beckett IS woman different. And I suspect had Sister Wendy not become a nun, how she would have occupied woman would still have set her apart from the norm. Sister Wendy was born with a deep sense of the beyond-perhaps something that carried over with her from a previous life? Regardless, that something, whether God or art, she has the unique ability to SEE and convey so that we too can SEE. Even paintings that have become popularized through pop culture where we've seen them thousands of times on t-shirts, billboard booze ads or Batman-like van Gogh's Starry Night.  Sister Wendy can subtly point out what we've glaringly missed all along, making the painting come alive to us for perhaps the first time. Through Sister Wendy's spiritually artistic eye, with each painting or sculpture a pilgrimage to the aesthetic, she brings us a little closer to the beauty that lies in all of us, if we dare walk with her.