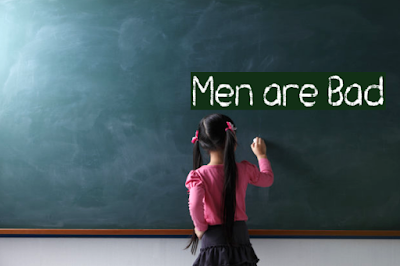 My wife recently worked with a six year girl (whom I'll call Sue) who had been physically abused, emotionally abused and sexually abused by multiple men. During a break the little girl asked my wife if she could play teacher (they were in a classroom setting). My wife said, sure. The little girl went up to the blackboard and role playing a teacher said "Now the lesson for today class is (then wrote on the blackboard) MEN ARE BAD". She verbally added that "boys can be bad too, you gotta be ready for 'em" and that "girls should just get together, we'd be fine without 'em". In this classroom there is also a poster that reads: Are Boys Smarter than Girls? The little girl read the sign then said out loud NO! Then asked my wife if she could write "no" on the poster. My wife explained she didnt agree either but it wasnt her poster to write on. As tragic as this little girls life has been till recently, more tragic is that she's learned AND comprehended more in her SIX years of life about the male species that billions of teen/adult females around the globe.

Women like Aiden who is 21 years older than Sue, Adrian who is also 21 years old than Sue or Mark who is 17 years older than Sue, who each would have been personally failed or fucked over my men, been close to other women who have been failed/fucked over by men or both and as adult women all would have the resources to study the MAN-made psychiatric industrial complex, juxtapose personal experience and historical data available to run screaming in the opposite direction than they are now headed.

It would be utterly IMPOSSIBLE that any young woman here (or woman like them) NOT to have come into contact, either directly/indirectly or both with at least ONE of these men below, all of whom have/are causing millions of women to suffer and die prematurely.

When a SIX year old girl has garnered more wisdom about men than the adult (near adult) women in the world, it isnt simply a woman President we're in need of, but the brutal honesty of a girl child who can teach us what we've forgot or dismissed long ago-beware of the boogeyMAN!