I wrote a piece last week on how Eugenics theories sprang from academia and grew into the genocidal beast still killing today all those labeled/diagnosed or self identifying as different and how that difference is proliferating not out of acceptance of difference, BUT out of identifying difference for Eugenics purposes. I went on to record a YouTube video of myself reading the piece, see video on the right which has now been recorded elsewhere. 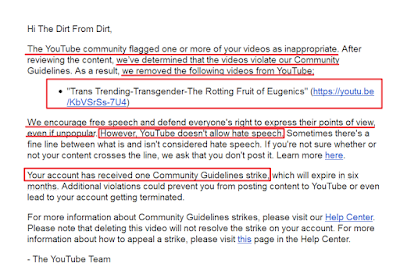 My video was REMOVED for HATE SPEECH! While I will freely admit to despising eugenics in all its incarnations throughout history, I didnt even say in said video that I "hate" eugenics. I then went to my Youtube account to "appeal" the moronic review of my work. This was waiting for me:

Without clicking that I "acknowledge", which screamed to me that by doing so I was admitting that the video was HATE SPEECH, I could NOT proceed in order to appeal. I hesitantly clicked: 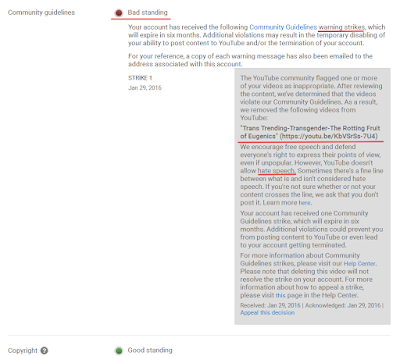 Another message emphasizing my BAD standing with Youtube, the STRIKE against me and warnings that more strikes could lead to my account being suspended. Keep in mind, Google owns YouTube and my post here remained up and untouched. Clearly a different set of captains manning the YouTube boat. I wrote a brief (as I was only allowed to be brief) clarification of the post and sent the APPEAL.

While the video was reinstated because a different reviewer could not find anything in the ballpark of HATE SPEECH, that feminist's truth-tellings of white hetero-patriarchal history and modernity was flagged/labeled as HATE SPEECH in order to censor and ILLEGALLY silence any (female/lesbian) voice of dissent brings us closer to a totalitarian state/web.

I and any reader of this blog knows full and well the video was removed because of the correlation between eugenics/homosexuality and the new sacred moo transgenderism! YouTube doesnt give a flying fuck about video's that outright PROMOTE the HATE AND VIOLENCE AND RAPE OF WOMEN-Youtube carries over THREE MILLION RELATED VIDEOS OF THAT! 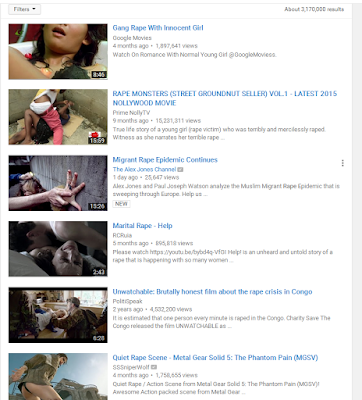 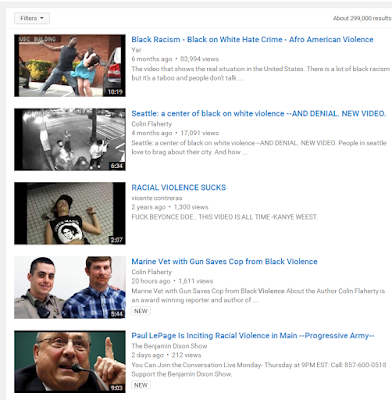 Oh and look Youtube also carries videos on the eugenics euthanasia mental institution my video was partially about: 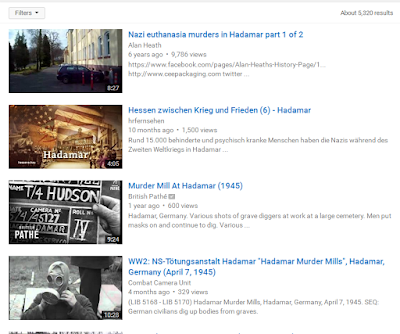 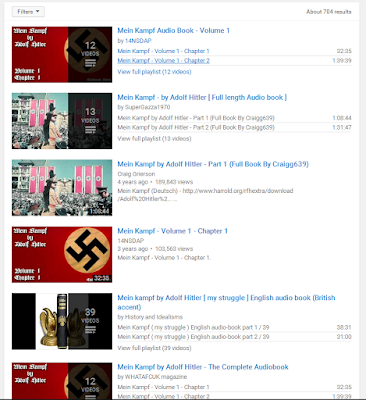 Oh and those good HATE SPEECH WHITE STORMFRONT TUNES like:


YouTube isnt interested or invested in preventing the hatred of women, lesbians, races, minorities, religions et al UNLESS they THINK transgenderism MIGHT be examined/sniffed at/scrutinized too closely or critiqued. YouTube (someone/s there) clearly are/have been using the site to PROMOTE transgenderism AKA the genocide of gays/lesbians/tomboys/homosexual children/cross dressers/mentally damaged young women alike. Those of us making that all too apparent are now subject to silence so that the work begun by late 19th/early 20th century eugenicists can continue uninterrupted and make FULL use of modern technologies.