A few days ago my wife and I were at the grocery store picking up a few things for our New Years Soiree: 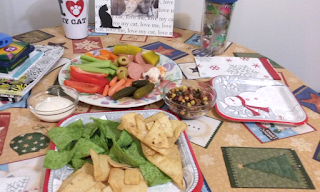 While walking through the store, we walked near a guy offering up samples of wine and prosecco. He politely offered us a taste. Making it very clear that I dont do either (strictly a vodka collins gal), but my wife enjoys the odd glass of wine with dinner, he began pouring her a sample of the wine first. While giving her the sample, he proceeds to give ME (looking directly at me) not HER, a full description of the wine. He then gives her a sample of the prosecco and again, while looking only at me, explains the difference between prosecco and champagne, followed by a brief description of this particular prosecco.

This sort of thing happens to us all the time, it can happen because my sex is assumed to be male and we're presumed to be a heterosexual couple. It can happen even when its apparent to hetero party's we're lesbians, because it is presumed I'm "the man" one. And sadly even among "our people", like the VERY GAY wine sample guy who acknowledged we were his "sisters". Its an unspoken/written dimension of Femme Invisibility. VISIBLE Femme Invisibility among gay and lesbian spaces/peers.

There was seemingly no reason for Mr Gay guy to defer to me/rendering her invisible, regarding the wine tasting, when it was made clear I do not drink, nor like wine but my Femme wife, loves it. Seemingly. That this VISIBLE Femme Invisibility happens when we're among other gays and lesbians illustrates how internalized male dominance/privilege/masculinity--female weakness/submission/femininity is within the Gay and Lesbian community. Even when the masculinity being acknowledged/heeded/respected is purely a perceived masculinity. Obviously my wife and I are both women, there is no hierarchy, we're both oppressed-differently, but equally. So much for subversive divisiveness within the Gay/Lesbian community!

But the VISIBLE Femme Invisibility that occurs within/among gays/lesbians (spaces) adds a warped dimension to general Femme Invisibility, i.e. not being recognized as a lesbian or believed after divulging said lesbianism, by gays, straights and various persuasions of dykes. But it is a kick in the cunt when the LG community KNOWS/BELIEVES a Femme is genuinely lesbian, then invisiblizes her when a Butch is standing to her side, by talking directly to the Butch, particularly where money or decisions are to be made. Or even when alone, conversations toward Femmes by dykes are often dumbed down/limited to questions about their hair, make up, what colour panties they're wearing or the weather! Most Femmes have experienced a good portion of the material that has gone into the making of dumb blonde jokes from gays and particularly from dykes, regardless of hair colour!

Femmes do not exist to fetch beers for dykes, prop up pseudo masculine dyke egos, stroke queenie gay male egos with make up tips or be the beard for macho fags. Femme's lesbianism routinely is lost in hetero crowds, it shouldnt be used, abused and distrusted by other lesbians or gay men for that matter. Femme isnt hetero constructed femininity DICKtated/designed to harden limp pricks. It takes, guts to look like most other women and have to regularly turn down male advances running the constant risk of pissing men off/male violence. It takes gallantry to do dyke so different even dykes question Femme's love/lust for women. And it take courage to visiblize Femme sexuality by walking side by side/hand in hand with Butch lovers while simultaneously risking straight male violence, jealousy from straight women, distrust from other lesbians and treated like little girls or free maid service by dykes!

Femme is the ultimate lesbian subversive, she is both visibly invisible and invisibly visible, depending on who is viewing her. But regardless of interpretation, she is most certainly ALWAYS a LESBIAN!