Dorothea Dix was born in Maine in 1802 to a Methodist preacher father and a depressed mother. Her father was an angry alcoholic, and while stern, he taught Dix to read and write regardless of her female sex. This early gift put Dix on a lifelong love and passion for teaching, especially teaching the less fortunate.

When Dix was only 12, she relocated to Boston to live with a wealthy grandmother. There Dix's learning/teaching was supported/encouraged to such an extent she opened a series of school and taught girls/young women from her own curriculum.

In her 20's Dix began having health issues that kept her home, (“I think even lying on my bed I can still do something.”) rather than give up teaching, she started writing catchy books designed to guide young minds with moralistic stories. After regaining her health, Dix traveled to England with friends where Dix learned of the new approach (human kindness/dignity) being used in British mental asylums. Excited, Dix couldnt wait to get back home and enlighten psychiatrists in America's mental asylums.

From On Behalf of Insane Persons 1843:

Due to Dix's efforts better conditions in mental asylums were developed in three different states. Dix volunteered her managerial services shortly after the start of the Civil War. She quickly became a superintendent over the nurses and the first woman to serve in such a high up federally appointed role. She was later dismissed over disagreeing with army officials.

After the war Dix went back to her social reform endeavors where the rest of the country was just catching up with her. Dix died at age 85. 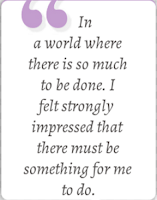 Dorothea Dix did woman different in a time when women in the majority could not read nor write and went from being the property/servants of their fathers to the property/servants of their husbands/children. Dorothea Dix didnt merely challenge the narrow life permitted to women, she CHANGED it-for herself and for women of meager means, mental issues (real and patriarchal), educated women, wealthy women and women today if we dare take her example.