The world according to Zack tells us that
Zack goes on to say that though
It is precisely this lack of credible journalism/blogging that misleads the uninformed mind and the uniformed lazy public, who like band geek himself, relies more on a headline that on actual data. And that my be fine if the headline is NO RAIN and although it is cloudy outside and one trusts a weather headline more than their own powers of observation, the worst that can happen is you wind up with a wet head. But when the headline is reporting to trans males the healthy benefits of having your balls cut off, its a tad more serious!

Lets take a moment and do the work of looking behind and beyond the headline and examine the study itself. From the link supplied by Zack Ford, "This is according to new research recently presented at Cardiovascular, Renal and Metabolic Diseases: Physiology and Gender - a conference of the American Physiological Society". Like you, I never heard of the American Physiological Society either. Lets see who the APS is before delving further: 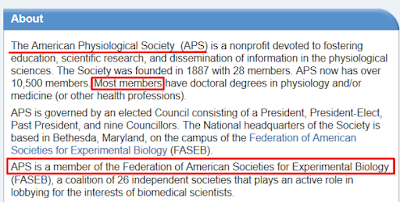 So a private group of academic and medical alumni who are MOSTLY PHDs, whom for whatever reason are interested in experimental biology. What does it take to be a member of this Schutzstaffel
elite guard? "Regular membership is for individuals conducting original research in physiology. Affiliate membership is for individuals interested in physiology but without the evidence of scholarly work." In other words, anyone who shells out the $185 bucks for the membership dues.

Under the APS's "featured news" from their website is this: 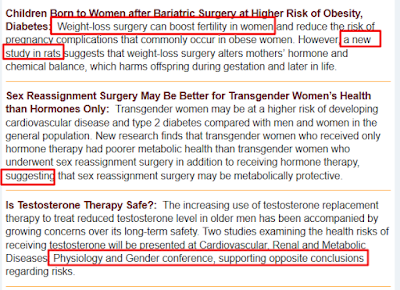 As you can see above, sandwiched between two fatuous articles lies the equally cockamamied article regarding the healthy benefits of butchered balls for the transgendered. Little can be gleaned from the information or to be more exact, lack of information provided by the APS's website upon entering their link to this article. They do give us who rendered the article..."lead researcher Michael Nelson, PhD (notice-no MD)...will present “A pilot study exploring metabolic dysfunction in trans-sexual women: Novel insight from magnetic resonance spectroscopy” as part of the poster session “Metabolism and Diabetes” on Wednesday, Nov. 18, from 1:30 PM to 2:30 PM EST in Rhode/Severn Room of the Crowne Plaza Annapolis Hotel. What a minute, PILOT study? Is that a REAL study?

More interesting from the APS's webpage on the PILOT study, is this: NOTE TO JOURNALISTS: To read the full abstract or to schedule an interview with a member of the research team, please contact the APS Communications Office or 301-634-7209. The APS isnt making information about this PILOT study easy to discredit, because it isnt making the PILOT study accessible.

While not gaining FULL access to this new brilliant PILOT study that is ready to neuter the estrogen perfumed saggy sacks of the transgendered, wait one minute before you snip snip. Notes from the APS's conference where the PILOT study was presented gives us not much, but much more than anyone needs to completely discredit this dangerous, illogic farce.

The researchers who made up the PILOT study: Michael Nelson, Deborah Clegg, Lidia Szczepaniak, Josiane Broussard, Richard Bergman and C. Noel Bairey Merz, not a single one outside of this PILOT study has any experience in transgender bodies/health. Not one. 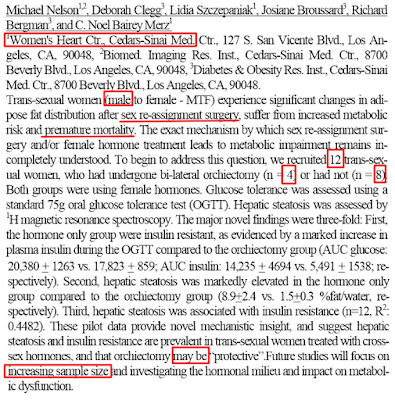 Twelve males, less than half of whom theoretically prove the PILOT's main point arent a study, they're the last supper sans Jesus. Only unlike the Last Supper the picture painted here isnt beautiful, its tragic! In all likelihood this PILOT offers no new information, and proves nothing. There are tens of thousands of trans males whom have had bottom surgery in the last fifty years, having their testicles removed didnt halt their premature deaths. This PILOT ignores these men's deaths, and further gives no information on the men in the study. How old are these men? What color are these men? What sexual orientation are these men? Were any of these men over weight? Did these men regularly exercise? Did any of these men drink alcohol? Did any have drug issues past or present? Did any have diabetic issues previous to the study? There is an endless list of questions pertinent to control studies that are exempt from this PILOT! The faux study and its faux findings are blatantly obvious when we look past the cocksure headline of Zack Ford the other lookbeforeyouleapers.

I'm not an Adele fan, but I know many a gay man is, I'm surprise Zack failed to take into account Rumour Has it.