Point 5cc-Binding the Ruthless and Remorseless 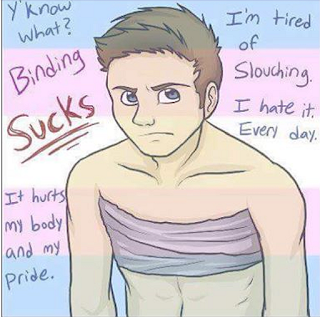 Point 5cc is a FOR PROFIT online pro transgender (female) T shirt venture of Aydian AMY and Jenilee Dowling. Their website is aimed at Trans Trenders like Aydian Amy Dowling herself, using "trans pride" to separate desperate Trans Trenders or their parents from some of their credit line. Besides clothing items, Point 5cc offers harmful breast binders, including a free used/slightly soiled breast binder to anyone who makes any over priced T shirt purchase.

The Dowling Sisters scrounge used breast binders in the form of donations from Trans Trenders who are no longer in need of them due to having had unnecessary double mastectomies. The not exactly "free" breast binders are used as an obvious incentive to sell merchandise under the ruse of helping/servicing fellow Trans Trenders.

While the Dowling Sister's site casually warns against breast binding too tight or for too long, it does nothing to dissuade breast binding, despite the overwhelming evidence of breast binding dangers from Trans Trenders themselves. These comments come directly from groups that Aydian AMY is an active member of and bear in mind they are the tiniest drop in the biggest bucket of girls suffering/dying from breast binding:

The Dowling Sisters using misogyny to promote and then profit off the chests of Trans Trenders who are rightfully uncomfortable with the Male Gaze upon their breasts, is precisely why the Drop the T petition is so important for the Gay and Lesbian Community. Selling/supplying breast binders to Trans Trenders would be the equivalent of Gay leaders supplying HIV infected needles or condoms riddled with holes to young gay men during the AIDS crisis! Or Lesbians passing out dental dams plastered with HPV to vulnerable dyke youth!

Profiting from your own misery is sad, profiting from the misery of others by increasing misery in order to increase profit, is fucking foul, nauseating and revolting!